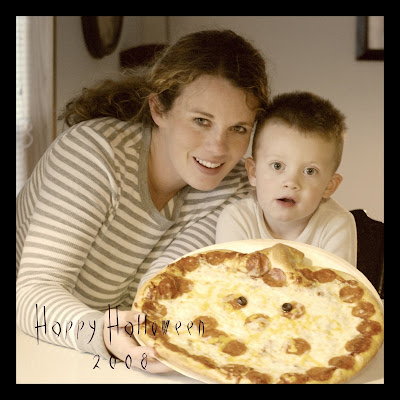 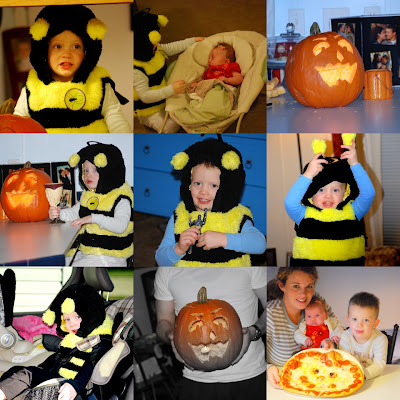 About a month before Halloween I asked Cache what he wanted to be and he firmly stated :"UH BEE MOM." So I just waved it off thinking he can't even pronounce Halloween (kaloweeen) .
he doesn't even know what he is talking about.
Weeks went on and we would talk about it again and each time: "UH BEE." I wasn't worried thinking we'll just put a wig on him or have him wear his cowboy gid up from last year.. then the week of Halloween came.. "UH BEE!" So I shopped around .. they make lots of cute girl bee costumes with tu tus. I finally took him to the store and showed him the spider man outfits and Frankenstein. "NO eye na be a BEE for Kaloween!" Finally at the grocery store, Cache lured me over to the halloween candy and they had a few outfits of course all frankestiens and mostly dog outfits. I picked out some spider webs and started pushing the cart away, when Cache stood up in the cart and started yelling: "A BEE!, A BEE!" I turned around and looked to where he was pointing and sure enough there was a little bit of yellow fuz sticking out from underneath a pile of costumes. It felt a little bit like the scene on willy wonka when Charlie spies the bit of gold from under neath the wrapper you know? I walked over and pulled out the little fuzz and along with it came a whole Bee costume. It was shoved behind the others, the only one not on a hanger and even a 3T size taboot! This was destiny. Cache grabbed it and held it all the way to the register. "my bee! my bee!" It was marked $20 which was a bit steep for my Halloween budget( we usually just make stuff outta sheets and panty hose you know?) but that day I would have paid $50. Anyway I got home and looked at my receipt. Well whatta ya know only $5. I felt like a won the lottery. We went and found some black tights and I do believe we had the happiest bee of all Halloween. And that's the story of "UH BEE." 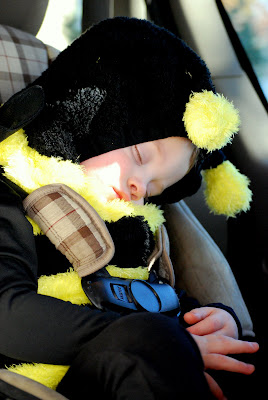 Now there is ONE tired BEE, and Halloween is still days away!
Posted by Amie Orton at 10:01 PM

Cute story Amie, thanks for writing. I loved the pictures too, especially the one of him sleeping in the car with his bee suit on. He is so funny. He reminds me of Devin as a little boy. Can't wait to see you all in a couple weeks!

That is one cute bee! Such a funny story.

What an adorable little bee!

un BEE lieveable he is so dang cute. He has a mind of his own, he makes quite the handsome Bee.

That is so cute. Cache already knows the power of "the secret".

That is so cute! What a sweetie! I think that's so cute that he knew exactly what he wanted to "bee". What a fun memory!