Devin takes tests a lot these days, but this is the first test I've taken in years since graduating. I passed! Yes I had to take it twice to believe it. 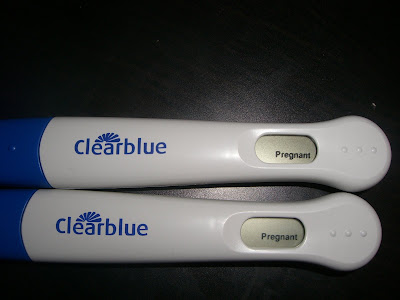 The language of Cache 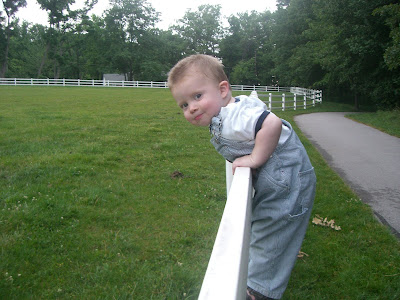 Living with Cache is exhausting sometimes. This is partly because he never stops talking from sun up till sundown. The only reason I think I can take it by the end of the day is because he is so fun to listen too. I will be kind of sad when he begins pronunciating correctly because then I won't be able to listen to this all day:

Yet Another Snow DAY! 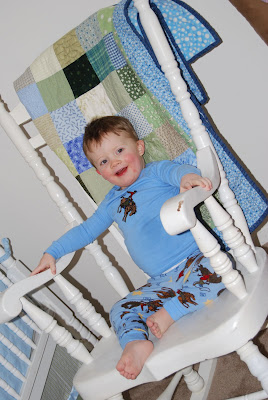 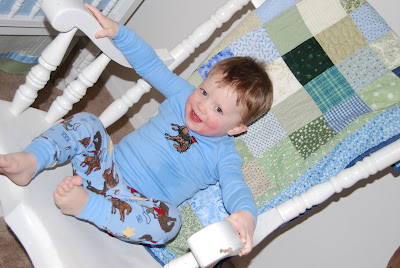 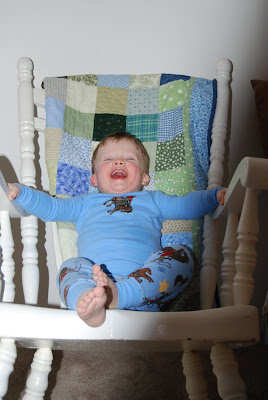 Yay another snow day! I'll begin at the beginning. Thursdays I don't get to see Devin much because he works at night, and although I don't EVER EVER arise with Devin at his typical and I might add crazy 4:30 am wake up time, today I managed to pull myself out of bed so I could make him some breakfast and lunch and spend at least a little time with him. I was delirious at that time of the morning..and I looked crazy because I went to bed with wet hair..and this frizz ball gets one hundred times crazier when slept on wet so just imagine. I think Devin saw me stumbling around looking like a crazy woman and just guided me back to bed. "Thanks so much Amie, but I think you need your sleep." So I was sad to not spend time with him but was asleep before I hit the pillow. I woke upat 8:00 to see Devin coming in the bedroom door with the biggest smile on his face: "Snow day!" and he crawled back in bed to snuggle and go back to sleep by me. In perfect timing, just as Devin pulled the covers we here a little voice from the other room. "HELLO! come In! GED UP! HELLOOOO!" Then Cache heard Devin's voice and said " DAAADDYYY I poop!" Then he started singing twinkle twinkle little star.. We laughed so hard. For some reason the past week Cache waits until Devin is around and always announces proudly "I poop!" If I ask him if he needs a new diaper.. he always denies it.. I think this is seriously funny and awesome.. So anyway Tangent but we had a snow day! No structure whatsoever..several movies and sweat pants all day.. all 3 of us. No structue is fun for one day, but tomorrow I'm ready to get somethin done and get rid of the "blah" feeling.
Posted by Amie Orton at 5:06 PM 6 comments:

Explanation of this video is located below with the follow up video to this one.. Posted for Grandma!(YOU might have to scroll down to my play list and pause the music to hear these video's)

Devin couldn't be there to watch cache open up his Valentine's day present, so we video taped it for daddy. Cache got Lightning Mcqueen car keys.

Posted by Amie Orton at 9:31 PM No comments:

So Devin and I have had spring feva recently.. just wishing and dreaming about warm weather. Today we were talking about camping and making plans and so we pulled up our camping pictures from last summer and came across this video. This is so typical of Cache. He ALWAYS acts like he knows what he's talking about and will explain things to me with his hands and laugh at all the right places but in reality he is talking complete jibberish. Here is Devin having fun with him and talking jibberish back. This is mostly for all the Grandma's. I'll probably post a few more recent ones before the night is through.

I Read this poem about President Hinckley today and thought it was very sweet. I hope that I can live my life so that my family can be comforted and rejoice in the life that I lived, and know that I'm recieving such a sweet embrace in heaven. 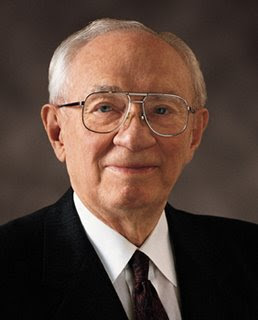 I imagine he's running to Marjorie now,
Yes, running, not waving his cane.
I see him embracing his father and mother
While they keep repeating his name.
I see him now meeting his forebears,
Brother Brigham and Joseph are there.
Sweet reunion of prophets, united by service
That only such noble men share.
I see him embraced by the Savior
While Father says, "Good and well done.
So faithful in stalwart endurance,
I welcomeMy noble, most excellent son."
I then hear the ripples of laughter
As he says the reception's just fine,
But he hopes that he'll get an assignment or two
Since there's no need to waste any time.
I can hear his clear voice in the stillness
At the close of this sweet Sabbath day,
Have faith and move forward.
There's work to be done.
President Hinckley would want it that way.
Anna M. Molgard January 27, 2008 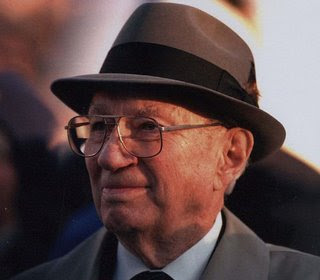 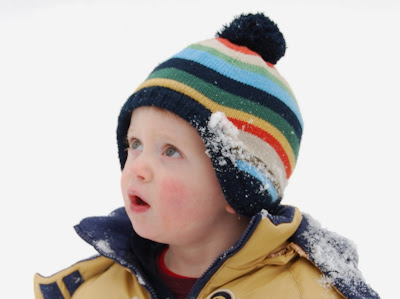 Let me tell you about Thursday. I checked the temperature at about 10:30am to see if it was warm enough to take sicky Cache out for a stroll.. The temperature read 70 Degrees! I was so excited so we hopped on outside. About half way through our walk it began to get colder and fast. Suddenly it started snowing! It kept on snowing all that night and the next day Devin's school was cancelled! Along with most of his clients. YAY! We had a snow day. So you might ask what you do stuck in a small apartment for a whole day? Well this is what we did. 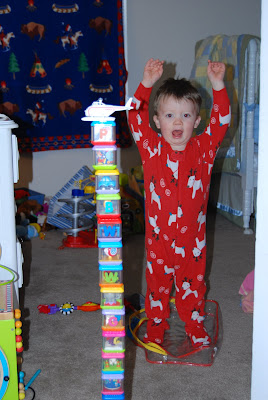 Devin woke up early with Cache. When I woke up to over hear a conversation between my two boys about building temples and then then the mobs came and burnt down the temples, so the Pioneers moved west and built another one! So cute. Devin bought a book on church history and has been reading it the last couple weeks. I walked in to see the above picture, which is what Cache calls a temple. I guess helicoptors land on temples. 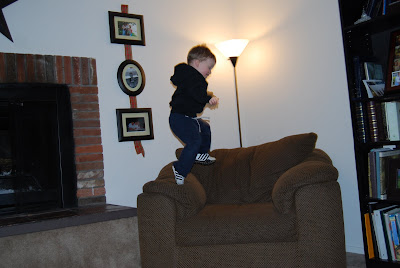 We also spent a large part of the day just wrestling and jumping of the couches(I know bad mom), and doing whatever Cache and Devin are doing in this picture. If there was a picture right after this one it would show Cache running head first into the fire place,, anyway so we decided we should take some of this energy outside in the snow. 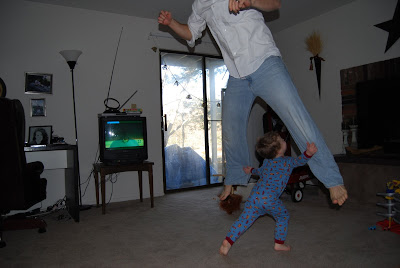 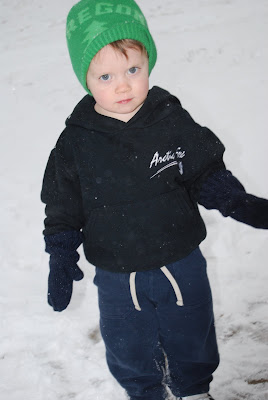 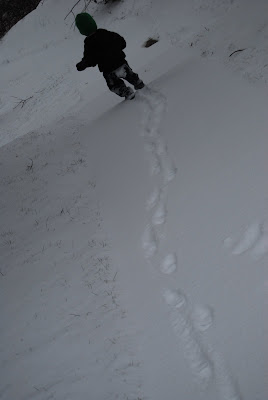 Quite a few tears were shed when we had to come in out of the snow. 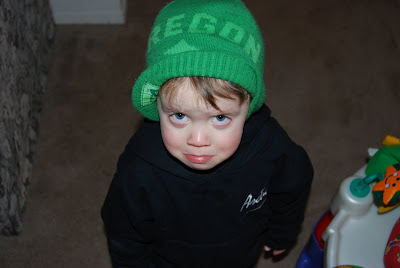 We ended the day with movies and singing primary songs... "Once there was a snowman." 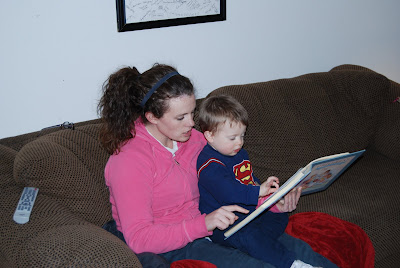 This is just a picture of Cache's breathing treatments we have to do on him.. He might have asthma, but not for sure, either way it is scary and we are grateful for modern medicine. 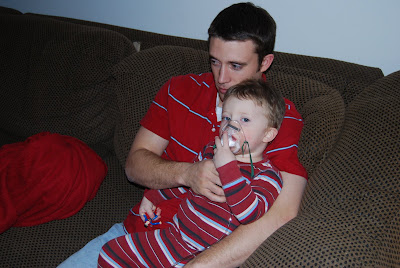 Well that was our snow day! What a fun little pleasure to be able to just hang out with my boys nothing pressing our time and take it easy.