It has been many a year since coming home for Round-Up!
This was officially the first Orton family Round-up. 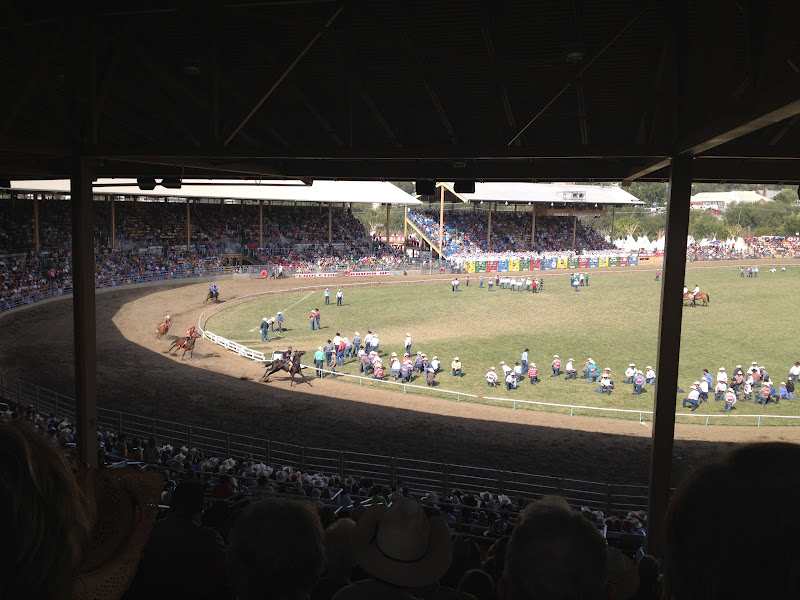 We decided to make it Naomi's birthday trip since it fell on her birthday AND she is our little horse lover.  I looove Round-up.  Since there is no school the week of round-up, and all my family either goes to school or works at a school... it was perfect hanging out conditions. 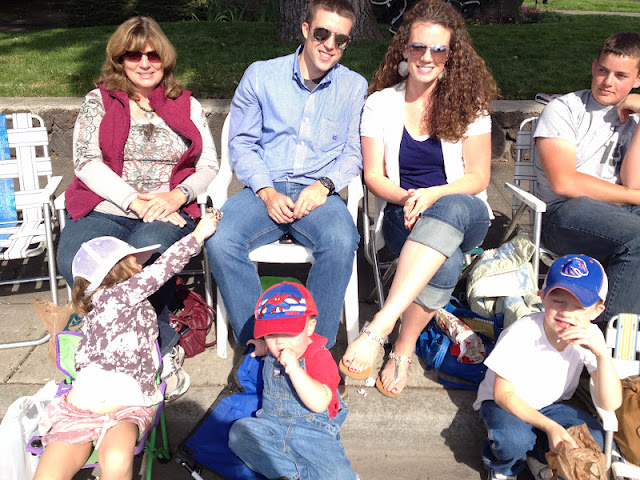 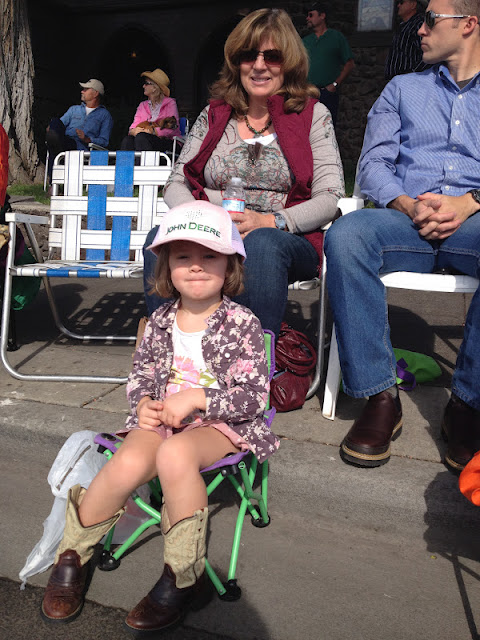 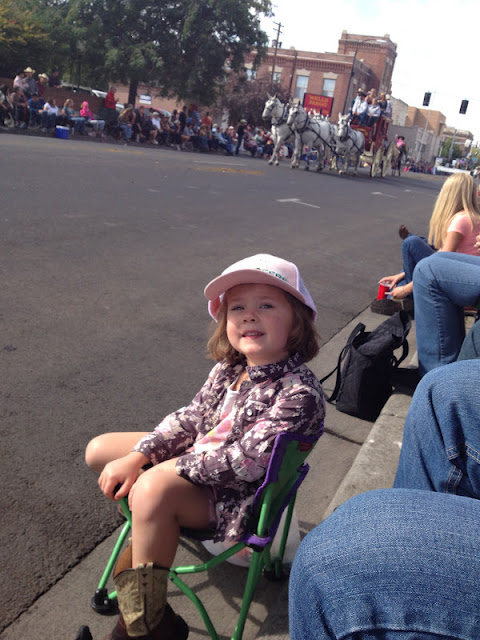 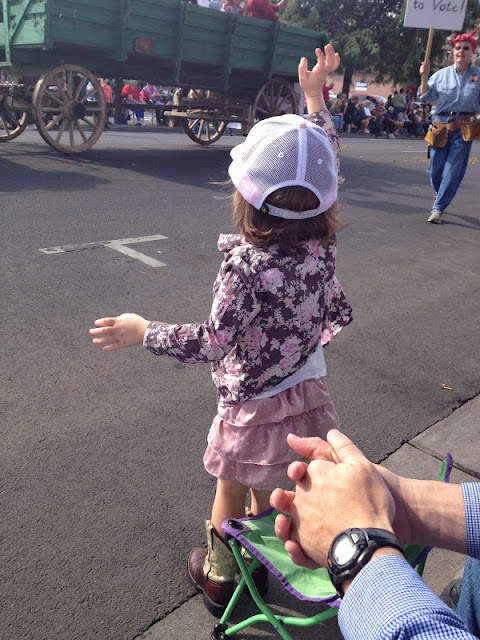 This parade is unique because there are no motors allowed in it. Just horses and wagons and cowboys.
The kids loved it. 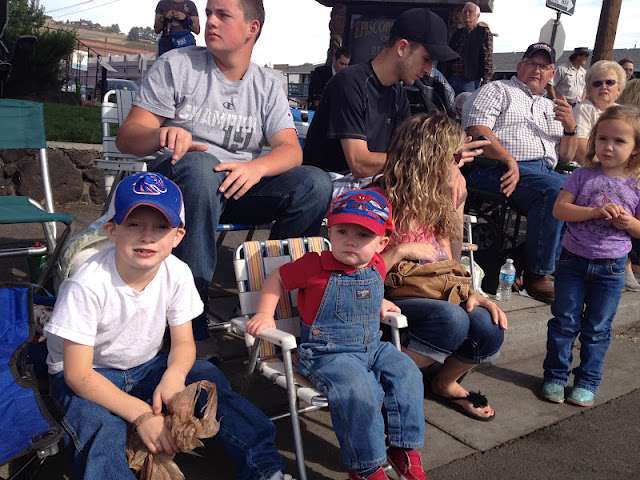 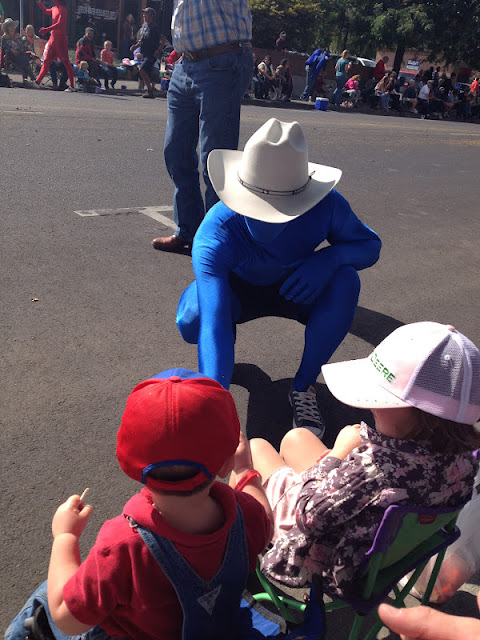 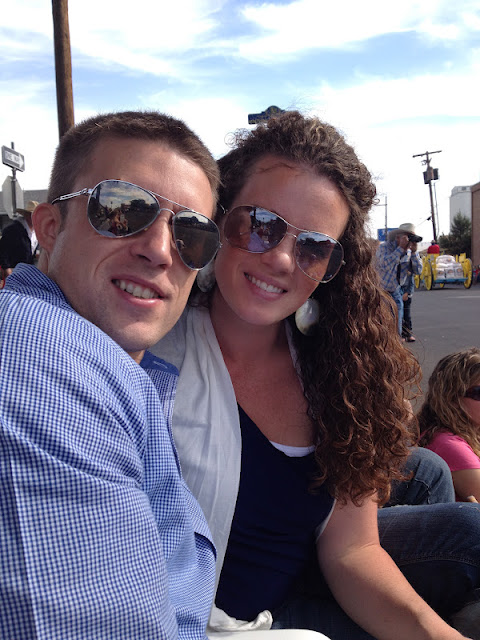 This sweet old man with a cane across the street,  stood up for from his chair (with GREAT struggle) for every single American flag that came by in the parade, removed his cowboy hat and put it on his heart.
It was neat the first time we saw it, impressive the second and downright humbling to us to tears the 20 something time he stood. 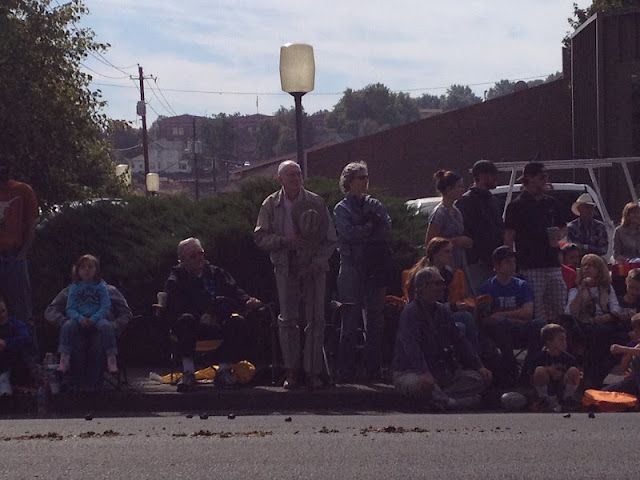 Many(not all!) from Pendleton get just as excited for Round-up as they do for Christmas.
Lots of tradition.
It is like a high school reunion. Lots of people even fly in from all over the country for the week. I saw soooo many people I knew from growing up. I forgot what it is like being from a small town.
Although I do prefer being anonymous at least the grocery store, it is a great thing.
Darla was out chasing loose steers around on her horse in the arena but she is such a sweet friend and came and found me in between events.  Love my darling Darla! 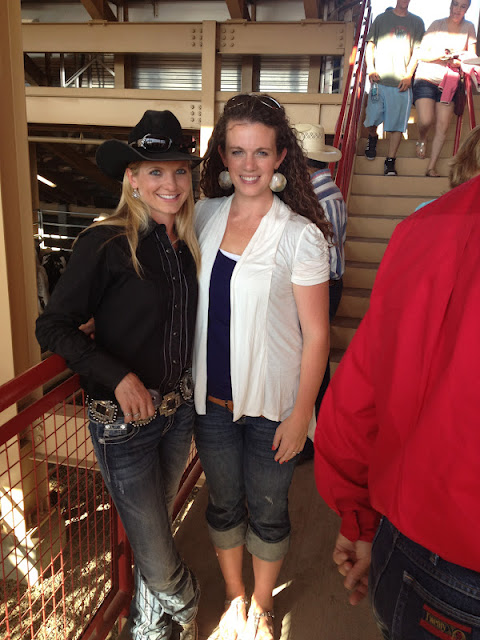 So the rodeo is 5-6 hours long.  It goes by in a snap to me, but Nay needed a walk or two.   She insisted the Brahma bulls were buffalo.   She also stopped dead in her tracks when she saw the Indian princesses.  They were beautiful and Naomi was stunned.  She refused to talk or have her picture with them but followed them around staring.  Also, a man was standing on a step that Naomi felt she would like to stand, so unknown to us she starts kicking and kicking this guys leg with her boot!  Finally the man began roaring with laughter as she kept kicking.  Then he moved and she moved into place.
OH dear. 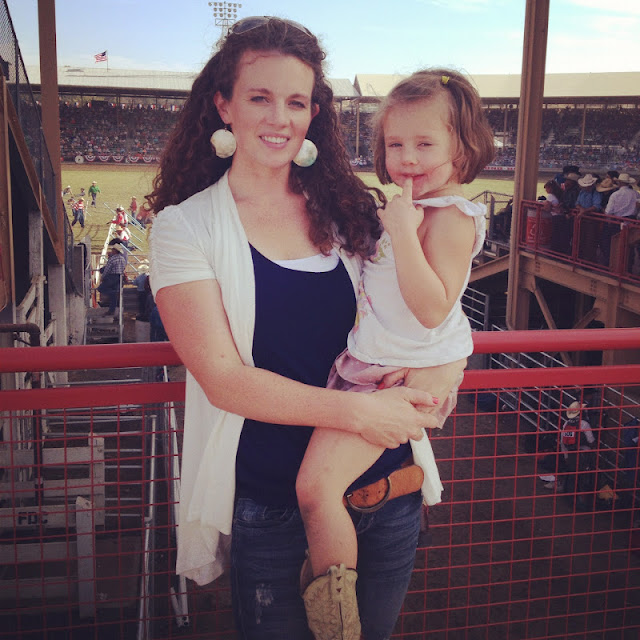 We saw the Tee pees in the Indian village where all the Indians move there families too for the week.
I can't wait to have my own tee pee someday. :) 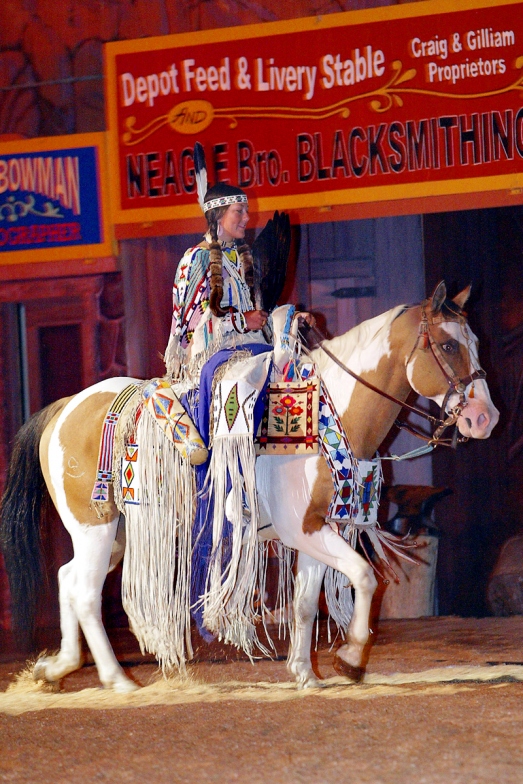 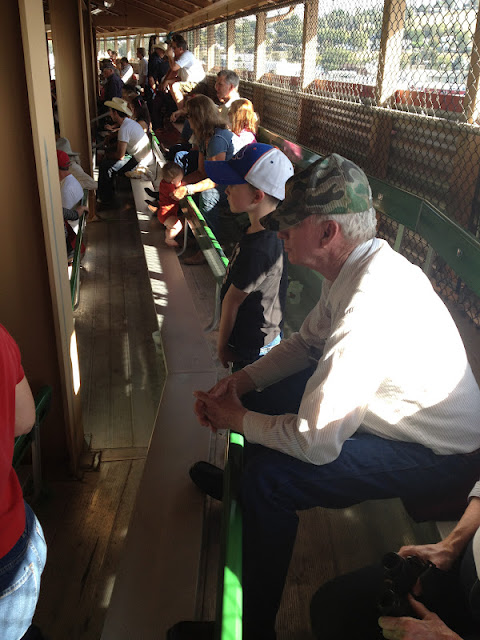 In the evenings, kids went to bed. Devin and I headed back in for the dance and more food and friends. 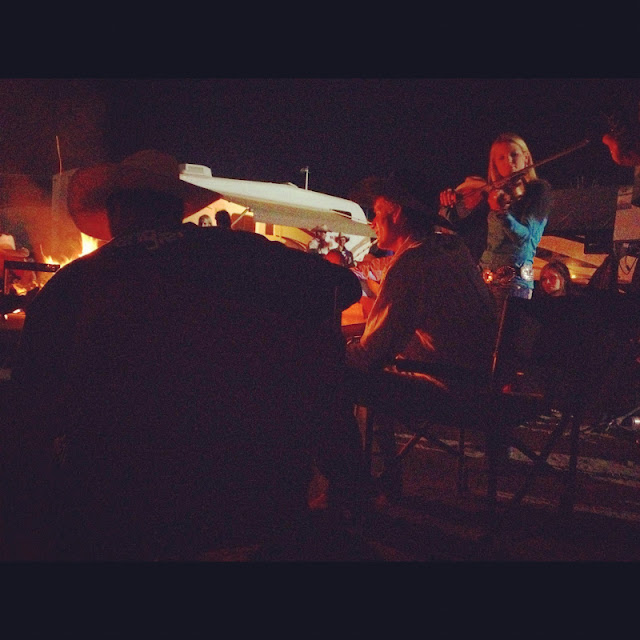 Darla invited us to cowboy camp.  We were loving it so much that we just stayed most the night.
All the cowboys that competed that day just sitting around the campfire taking turns singing their made up songs and telling stories. Darla and her sis and Dad would accompany them on the fiddle or play their own piece. Oh loved it. 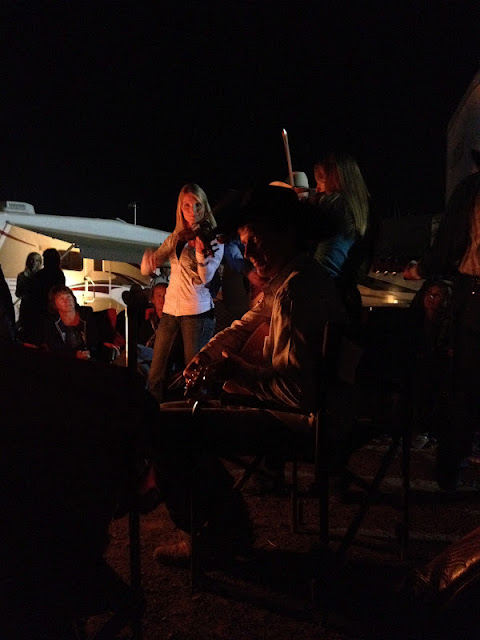 Saturday we took Nay to Main street.
Totally her idea to ride this bull. She begged.
Here I caught her smile that lasted like 2 seconds, then she flipped! 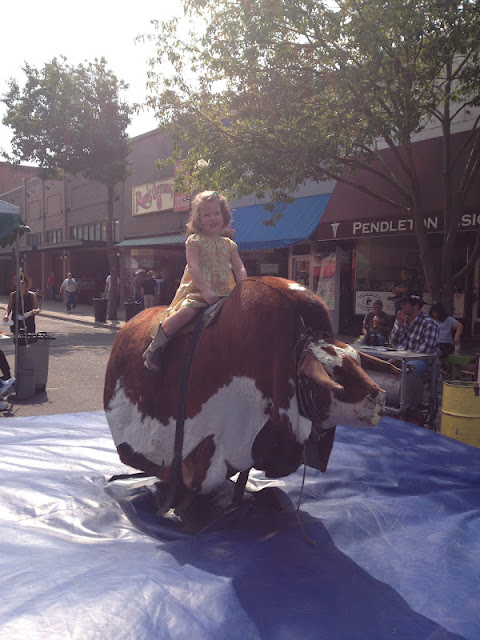 We walked over to the carnival and she wanted to go on all the big rides.
We let her go on a few and she smiled and whooped and hollered.
Here she is on the giant slide she climbed by herself to the top carrying her own little carpet.
She  plopped her little carpet up on the slide, and climbed on, but the slide was so slippery and her carpet took off before she was settled.  Her two little boots went flying up to her head as she flew down the slide and then her dress went over her head and there it stayed the whole way down.
We laughed and laughed but were so worried that she would be upset. She got to the bottom and just layed there with her dress still over her head.  Finally she sat up with the BIGGEST smile.
We love our girl and that is for sure. 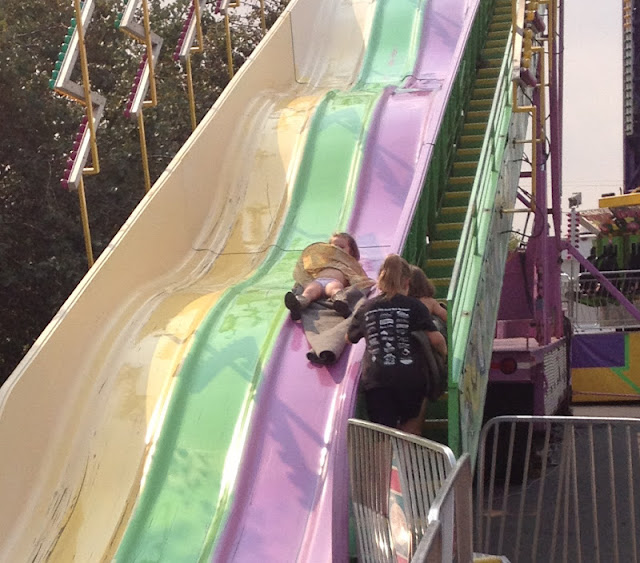 We had her party that night. I'll post that later.
The biggest success of the whole weekend is that Devin loved Round-up!
The other day I even heard him say: "Man I shoulda been a cowboy."
Ha. Then I sang him the song by Toby Kieth..."I shoulda been a cowboy."
He left the room... :)!  On the way home he stated that Round-up will be a yearly tradition now.
Fine by me.
Let er' Buck! 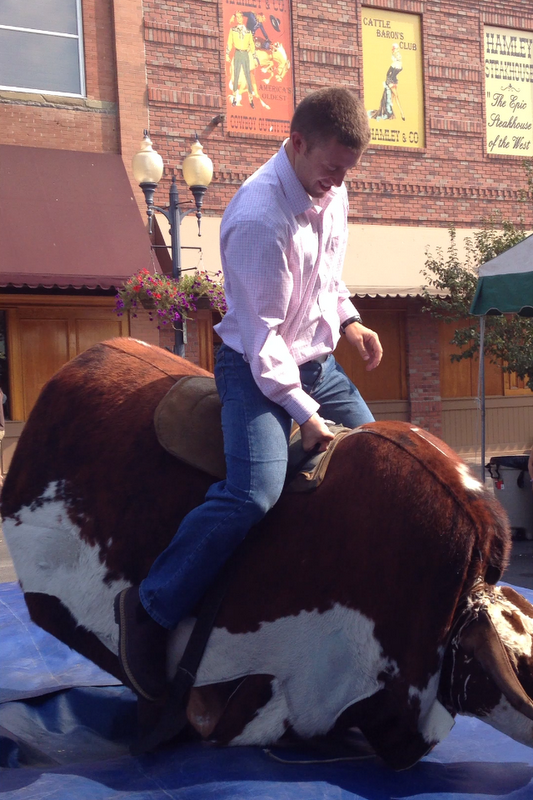 Sounds like I chose the wrong year to go home for Round-Up. I was there last year. I am glad Devin had fun and hopefully we will be there at the same time. Naomi is great!!!

Can we be your out of town guests next year? My kids would LOVE Round Up! So cool that you live closer to your home town and that you have such rich and wholesome traditions. I don't know if I'm made to have been a cowboys wife, but the thought was always so romantic. Chow ever greg and I dressed up one time for a Ho Down my cousins had for their wedding. We looked so authentic that some people thought they had actually hired us to come to the party. Maybe Greg's more of a cowboy than I knew.