Happy Birthday Devin! We had a quiet birthday this year with the traditional cheesecake and gift of a bottle of BBQ sauce. Devin also got some other gifts, but the BBQ sauce is tradition starting back when we were SUPER tight on groceries our first year of marriage and every penny counted, so we discussed every corner we could cut and one thing that was deemed unnecessary was the two bottles of BBQ sauce we bought every month. Saving us a total of about $4 a month. Resulting in $48/ year which seemed like a lot at the time. But i knew how much Devin loved BBQ sauce so I got him a bottle for his Birthday that year and it's been tradition ever since.
Devin's birthday cheesecake recipe:
-1/3 cup powdered sugar,
- 8oz package of cream cheese,
- 1 small tub of cool whip. Beat these three ingredients together, pour into a graham cracker crust(pre made at the store for $1) and open a can of any fruit topping or pie filling and pour it on top. Refrigerate for a couple of hours. (it is soo good!) 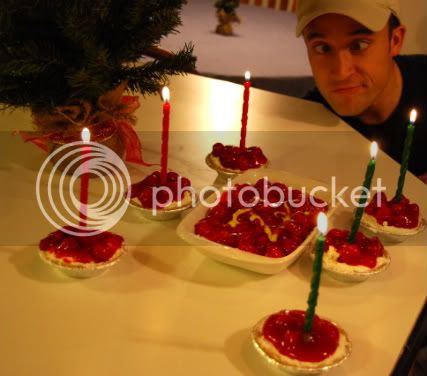 Since it's his birthday I wanted to write some of my favorite FACT s about Devin:
He Loves his little boy. If he could Devin would take Cache everywhere with him. I often have to convince Devin to leave him home from activities such as church meetings, he even offered to take him to school with him one day... I try not to feel bad when Cache gets hurt and just cries for his dad. He lets me comfort him, but it is known that he would prefer dad right now. Cache spells it out perfectly when he tells me every day: "Daddy is my friend, he's my best friend."
NEVER a critic, and I do mean NEVER. I can't recall an instance that Devin has ever criticized me. Devin loves to come home to a clean house, and the reason I know this is because when he comes home and it's clean he'll say "Wow the house looks great!" and if it isn't clean, he still comes home with a big smile on his face a hug and then will clean it himself. He does the same thing with Dinner. I appreciate this so much Devin, it makes me want to clean the house and make dinner.
He always breaks his back pack!And by this I mean he LOVES books and learning so much he can't go without books, so he shoves his back pack so full that the zippers always break and so do the shoulder straps. We also have occurred probably over $100 in over due late fees at the various libraries because Devin is always checking out more books than he can keep track of. He just get over excited.I've banned him on almost every vacation from bringing books along, but he will sneak on in his pocket. This last trip he snuck his book into Cache's back pack of toys...and looked so red and guilty when I discovered it...my heart melted and I realized again how much books mean to Devin.
He is a dreamer. He is always planning the future and new ways he can make money, help people, create a solar house, a big health resort, anything, he will dream it up and then start researching it and really believes that he can make it happen.
He loves to play. When at a family function, I seek out other adults to have a conversation with, pretty soon you'll hear a group of children roaring with laughter and Devin will be right in the middle of them, doing magic tricks, playing soccer or making up some kind of game. I still haven't figured out if he does this because he loves children or just loves to play and they are the only ones that will play with him! He has a respect for children that they seem to respond too and even the neighbor and friends children just follow him around. Also if I ever take him grocery shopping with me, sometimes he isn't much help because unless I give him an assignment, he is racing the cart up and down the isle for Cache's amusement. He just can't pass up a time to have fun or a good joke. click here to read some jokes dedicated to Devin by my sister.

He sees in black and white. In Devin's mind things are never complicated. The house is messy so I'll clean it, Amie is sad so I'll love her, President Thomas S. Monson is a prophet of the lord, so if he says it, I'll do it. A lie is a lie. Going to church means going to ALL the meetings. He doesn't do this in a self righteous, "im so good" way,, it's just the way it is.. so thats the way he does it and he doesn't look down on anyone else for not doing it this way (like me).

A big heart. He really loves the people in his life. If someone near to us, even an aquaintence is really struggling with something, I can see it affect Devin. He Loves the Lord and I've never seen him more remorse then when I've witnessed Devin realize that he has dissapointed the Lord by either something he's done or something he should've done and didn't. He also loves me more than I knew existed, even in a marriage. After I've been just horrible and stupid, mean and cranky and ugly, i've asked him how can you still love me like that? He's response is always. "Because Amie, your mine."

He's got FIRE in his pants! He is busy, busy, busy, always moving, reading, doing SOMETHING towards his goals. He likes to wake up early and if there is any free time he tries to fill it with something, a new job, a new book, a new recipe. This past year he has taught himself how to make Sushi, onion rings, salmon potato cakes, and a killer philly cheese steak sandwhich.

A true friend. If you like Devin, well Devin likes you, and actually even sometimes if you don't like him, he still likes you. I'm not sure Devin's friends realize how much he loves and cares about them. He is loyal and thinks everything about everyone is "just so funny."
There are many more things that I love about Devin, maybe next year I'll right about those. We feel so lucky to have you in our lives. Happy Birthday Devin!

Happy birthday Devin, you are an awesome father to your sweet chillins, a great husband to Amie and we couldn't ask for a better nephew...well I guess we didn't have any say in it, but Amie picked you and we love you. Hope you had a fabulous day.

I loved reading that, seriously, you are one of my all time favorite couples...:)

Happy Birthday Devin! We are so blessed to have you in our family.
We Love you Devin.
Love Mom & Dad Spratling

Devin...YOU JERK. I didn't even know it was your birthday? Well now i know...and knowing is half the battle! I love you buddy. You are one of my all time favorite people, and don't tell Kasia...but i am your "Secret Admirer" :)
We sure miss you guys. But take joy in seeing how well life is going for you all. I hope you had a wonderful "birday"
All the Best
Jared, kasia, Wrigley