I just need to record some bad behavior. We'll laugh one day right?  Our home teacher was over last night.(Brian Hanks)  And he is super great always doing a kid version of the lesson before a more adult discussion with us.  My point is the following is not his fault.  Our kids are the WORST when home teachers are over. Worse than they ever ever ever act with us. It's incredible and it's embarrassing and shoot. I'll just tell you that during the visit, Gage tore down part of the curtains. YUP. Sure did. Cache kicked Naomi off the couch. Like foot to face, Naomi went flying heels over head. Yes.   Sent to his room.  Right before the end, Cache sulked back out to join us.  We thought all was calm.  Nope. Naomi told to take her water bottle in the kitchen because Gage wanted it and she didn't want to share, which she did but first took the lid off and dumped it on Cache's head and the couch???!!! I was speechless. We were 1 foot away from her. I had no words. I've never seen them act that extreme.

We have been getting phone calls from Cache's teacher reporting "squirrely behavior." Meaning he just is silly at the wrong times. He is silly, ALL the time.  Sweet, but silly. When I volunteer in Cache's class the kids get BIG smiles on their faces and then proceed to tell me all the things Cache does that make the teacher mad.  Stick silly pictures of Gorillas making funny faces on the board when the teacher isn't looking.  Also the teacher has to put a mark on the board evertime she hears Cache talk in a funny voice. And if he gets 5 marks he doesn't get a sticker...OH boy. (I have to report that since the teacher and I got on the same page, it didn't take long for Cache to curb his silliness and save it for recess.)

And last but not least... The kids TEE PEED our bedroom. I don't know how, when or where I was. Or more importantly, who taught them what that was?  But Yes they did. 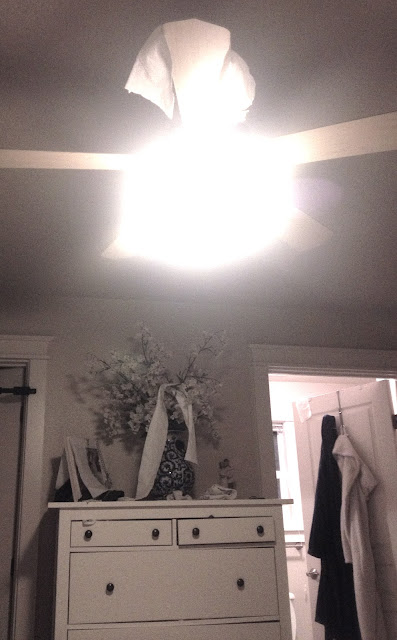 Devin and I discovered this as we went to bed late one night. After getting over the confusion, and bewilderment, we had to sit down on our bed and just laugh at each individual piece we spotted around the room.  We couldn't stop.  They got it everywhere, on the ceiling fan, on top of the door jams,(look at the top of the bathroom door in the picture) tied on bows on our nightstands. Wow.

All this time I have been wanting my children to be better friends.   It is finally happening.
But... maybe I didn't realize what I was asking for?
Posted by Amie Orton at 10:06 AM

Oh, how I have missed your blog! I love that life has finally slowed to a point where I can chuckle at your life! I love it! We have a little one coming in August... find out later this week what it is! Sorry we didn't see you at Christmas, we will make sure to come visit in May when we are up! love you! Krista