We have determined that Naomi came with a rule imprinted on her brain.
That is: "If it can be possibly broken, I MUST break it."

I'm trying to avoid saying, "She is CRAZY!" I don't want that on her recorded history, but man I say that a lot during they day.

Just in the hour. I sent her out to get buckled up while I grabbed my purse.
Gage followed her out to the car naturally.  I took only a moment and when I got out there I was surprised not to see Naomi in the driver's seat pushing every button possible and moving the seats. (She never listens and actually buckles up but I keep trying.)   Gage was standing at the wheel pretending to drive. I opened the door and he plunked himself down, made his eyes really big and round looking at me  and said:
"Uh OH. Mi Mi"  Translation: "Uh oh Naomi."
Then he handed me something black that I hadn't noticed him cradling under his arm.
It was the rear view mirror.
Naomi was curled in a ball in her car seat.
!!!!!!! 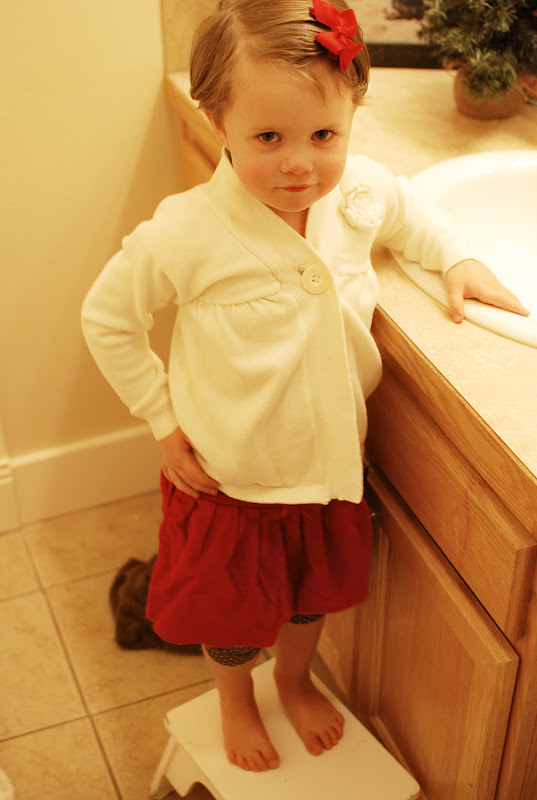 Maybe this isn't totally crazy.  But you have to know that in the last 24 hours she has:
1. Ripped every sponge curly we own in 2 if not 10 pieces.
2. Emptied yet another bottle of toothpaste completely, in 15 little blue mountains all over the bathroom floor and toilet and sink.
3. Tried to chew a hole in my shirt. When I was wearing it.
4. Taken every crayon at the restaurant and broke them each in two as fast as she could.
Got in trouble and said sorry then when Cache's bucket of crayons got within reach, hurried and snapped each one of those in two as fast as she could.  She can't help herself!
5.  Unrolled a whole roll of toilet paper into the bathtub.
6. Made other bathroom messes that are too gross to mention.
7. Ripped the sole of her dress shoes, WITH HER TEETH.

Just in the last little while she has wrecked and by that I don't mean she just ruined a little bit but totally obliterated:  The highchair, my yoga mat, potterybarn kids chair!, at least 4 other new pairs of shoes, the paint on the rocking chair,  toothbrushes, I even caught her trying to rip the carpet up.  I have to stop.
If I were to try to record her ruining in the last year it would make me cry. And you wouldn't believe me. IF this girl is ever quiet, RUN. Sprint to find her.


On the other hand, she is hilarious and I love her completely to pieces. She never does things out of spite or to be mischevious. She just does them matter of factly.  Most often in just her undies or bare bummed and singing while she works at it too.   But she really is so sweet.  When she prays it is 10 mintues long and all thank you's, never asking for anything unless we remind her to "bless the food Nay or bless us to sleep good."  She tells story after story after story and laughs.  She giggles and plans ahead what fruit we will buy next time we go to the store.
"Nee-rember Mommy, we MUSH buy Cherries for me tomorrow!"
Then she giggles through the fruit pointed at every fruit that she thinks are: "So cute!" And "So yummy!"
I already  get glimpses of the lovely young lady she will become. Maybe those quick glimpses I get are mercies from Heavenly father for HER so I don't kill her sometimes.  I do love that she is crazy even.   But my goodness we can't have nice things!

* As I'm typing this I had to stop and chase her down because she somehow got hold of a can of spray paint and was chasing Cache and spraying him with it.  I'm beyond being upset. I just have to remove the danger and walk away to calm myself.

I only meant to write two sentences.  Can you imagine living with me?

Oh my goodness I had no idea she was so destructive. olivia is like that and she's been doing it since she was 1 now 6. cutting dog leashes and swing ropes just in the last little while. I am sorry if you find out how to fix it let me know!!!!!!!

Oh my goodness I had no idea she was so destructive. olivia is like that and she's been doing it since she was 1 now 6. cutting dog leashes and swing ropes just in the last little while. I am sorry if you find out how to fix it let me know!!!!!!!

I love her. And I love that you are her mother. It fits because you are patient and you see her goodness, even when it's hard.
PS: she should (or shouldn't) meet Lisa's daughter Shae. They would be a DANGEROUS duo to say the least.
Love you and miss you TONS!

I'm speechless. Nope, you can't have nice things. Cardboard boxes for furniture for your family until she's all grown. If it makes you feel any better, my children wrote with permanent ink on my leather couch. The following day, Avery peed all over the leather loveseat. Neither are coming out. But this seems like child's play compared to your experiences =) Good thing she's soooo cute!