I want a HOLE sandwhich

When making lunch, Cache always requests that he gets a "whole sandwich."
That means he doesn't want me to cut his sandwich.  Nay started requesting a whole sandwich also.  So, I started giving her an uncut sandwich.  But she would still throw a fit and cry.  Most of her tantrums don't make sense and there is no solving them.  So we don't spend much time trying to figure them out.
"Just come back when you're happy."
OR
"You get what you get and you don't throw a fit." (From her brother )  And we move on.
Well the other day, She again requested a whole sandwich.  Or so I thought.  I gave her a WHOLE sandwich.  Same scenario began playing out...
" I SAID I  want a WWWWWHOLE sammich!" wah wah wah.
In the middle of Cache's mantra too her, "Nay you get what you get..."
Naomi stuck her  thumb up through the middle of her sandwich, gasped, smiled and started laughing!  Cache and I sat totally confused at her insanity, until she proclaimed through her tears and laughing, holding her sandwich and thumb up in the air..
"THERE!  Now I have a HOLE in my Sammich!" 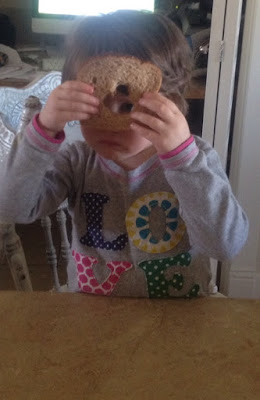 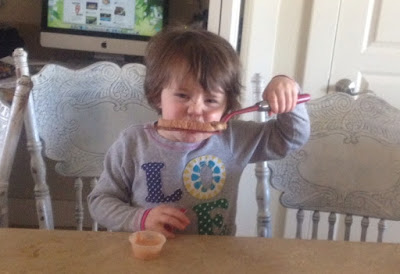