Come March this little family starts pushing the winter boundaries.  If we act like spring, maybe it will become spring?  Resulting in MANY long drives to different parks that we play at for 5 minutes.  Sometimes we don't even get out of the car.  But we just keep trying. 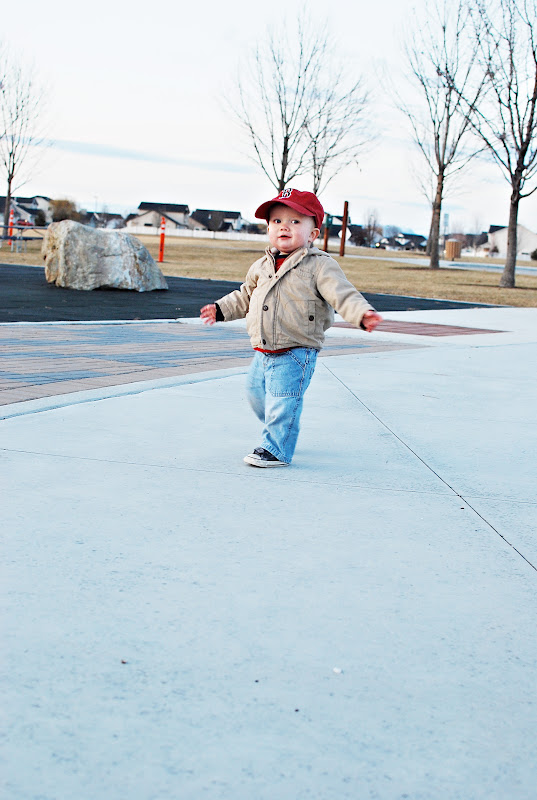 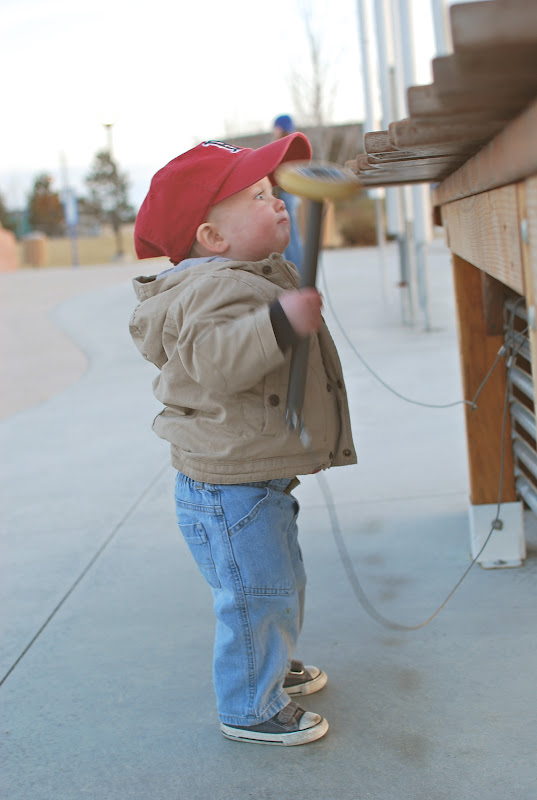 Nay runnin her cold little leggies back to the car. 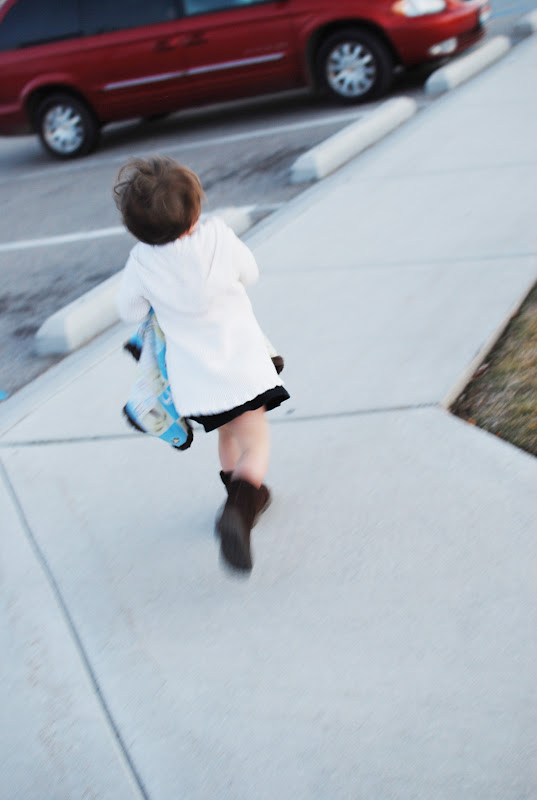 Weekends with cousins make the winter go by lots faster.
I think its our turn to host a cousin night... 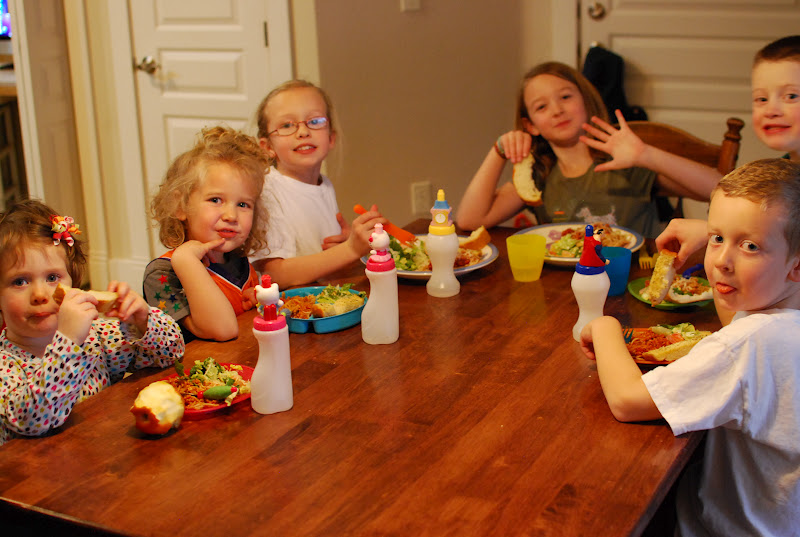 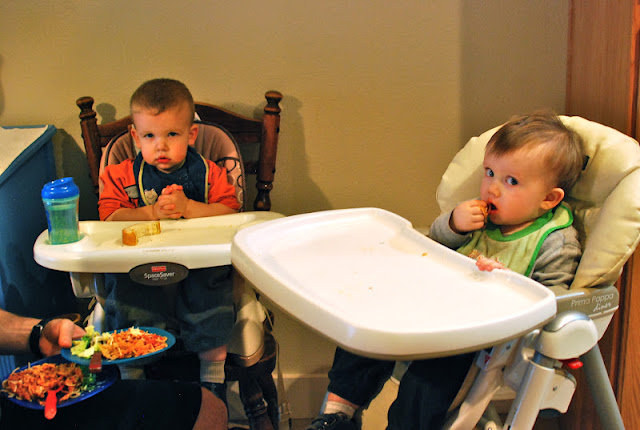 I have to work HARD to enjoy Jan-March.
I have to remind myself that even though nothing is growing outdoors, we are still
learning and growing in A-doors.
Cache :
-Obsessed with finding the perfect opportunity to throw a pie in his Dad's face.
- Snuck outside before breakfast and hid a snowball under the table till JUST the right moment to peg his
mom in the head.
-Caught Beiber Fever.  Side effects of this fever have been:
>  Doing endless hours of breaking dancing lessons off of YouTube.
>  Changing his favorite color from Bronco colors to Purple(Justin Beiber's favorite color.)
Devin is dyying.
Just finished: "The Lion the Witch and the Wardrobe." We are gonna watch the movie this weekend and start the next book in the Chronicles of Narnia series. 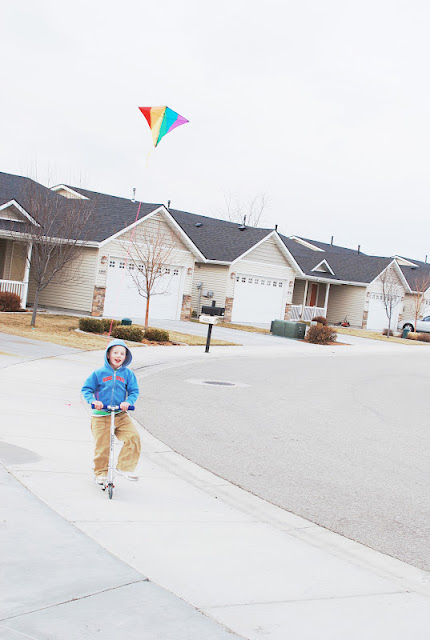 I really love this Cache of ours.  We've grown closer as Devin work keeps him away from home some nights.  The two littlest go to bed pretty early which gives Cache and I a good hour to spend together.  I've had my hands more particularly full these days, Cache without asking just assumes the role of oldest child.  The kid knows how to work and it makes me so proud to see him unload a whole car load of groceries  without me asking for help.  He'll see me coming and tell me, "I got it Mom." I worry a lot about raising Cache in town.  What experiences is he missing out on? What qualities is he not developing by being in nature with animals to care for and a farm to feel a part of and require his work?  But I get glimpses of the little man he is becoming and it puts my heart at rest. 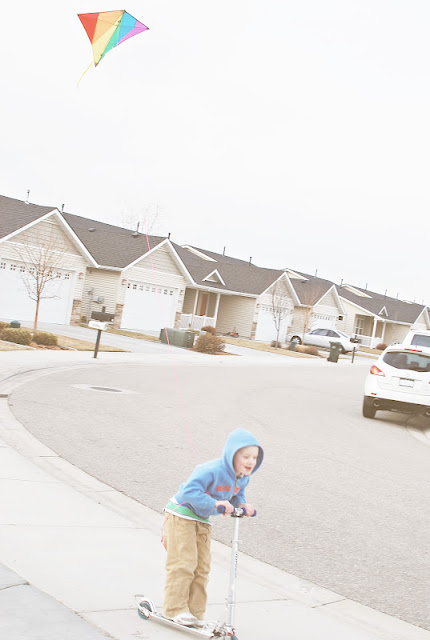 We were hunting for his library book the other day, and he kept running in his room and shutting his door.  Frustrated because I thought he wasn't helping me find it, I kept opening the door, hollering something at him and he would come running out and look around, then run back into his room and shut his door.  I finally stormed in there to find Cache kneeling at his bedside,
praying to find his book and he didn't want us to see him.
That image will forever bring tears to my eyes.


And that brings me to our little Miss. 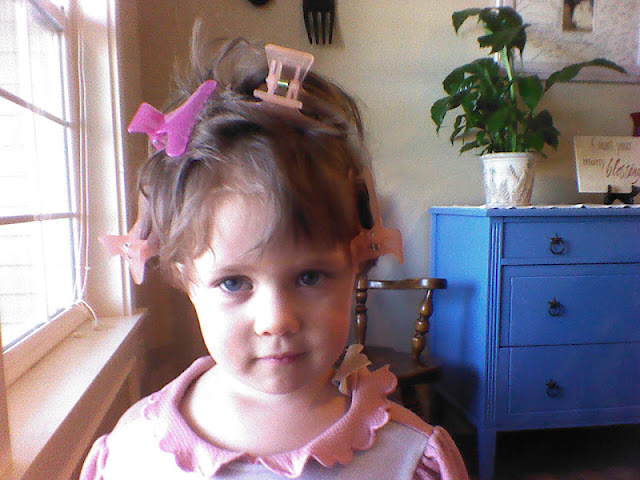 High heal scootering in the snow? 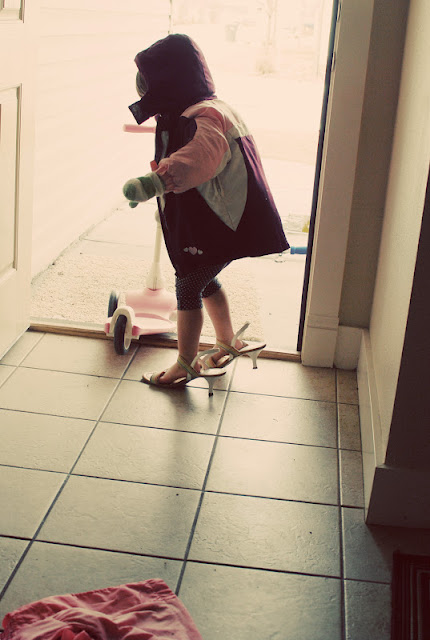 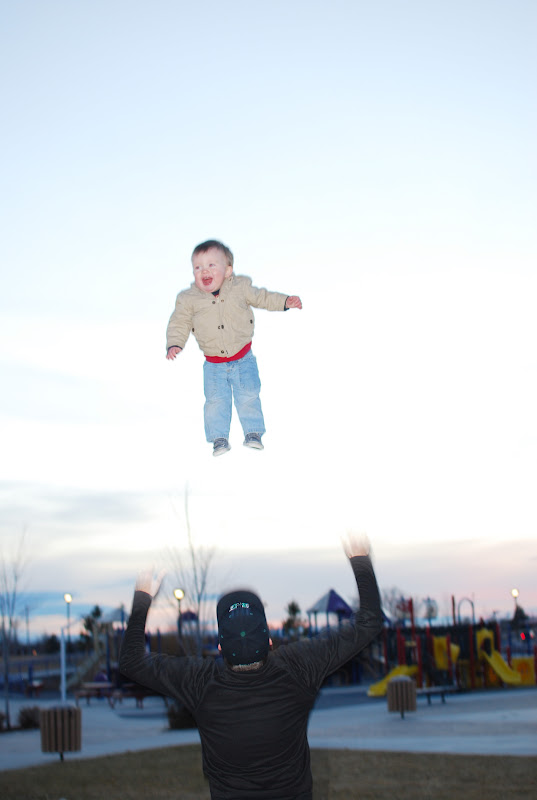 -Would live in his highchair and tries.
-Blows kisses when people leave. "MuuWAH."
-Out eats Naomi always and even Cache sometimes.
-Eating Oatmeal with his fists.
-Loves to be pulled around the house on a blanket..
Basically this baby gets whatever he wants and we all cater to him.
Amie:
Devin signed me up for 5:30 am boot camp. L. O. V. E  it.
Babysitting like crazy
Saving for and planning upcoming trip to Tahiti.
Actively scheming to move to Hawaii. (And in the same breath, trying to learn to love it hear in Idaho...)

Devin:
Going 50 different directions at once. As usual.
Lots of dreams appearing to come to fruition...
Sometimes stays up all night long to catch up on paperwork. (Or reading a science book WHILE listening to lectures on the body.)
His amazon wish list has reached 450 books.
Working up to dunking once again.  :)
After a the dreaded first year of business, he has now begun to grasp things (at least a little) And has now decided he LOVES what he does, and is helping out so many people. So happy for him.

After writing that, I guess winter isn't so bad after all!
The end.

I love your family. I was looking at some college pictures the other day and it made me really miss you. We had some fun times. I am hoping one day to talk Joe into moving to Idaho. Maybe we can be neighbors. That would be pretty sweet.

I hope the good Lord blesses me with one like Cache. He's a stud like his dad. I know what you mean about wondering about what their missing out on by growing up in the city. I think about that often. Hopefully eventually, I can move my family back to some sort of rural/agricultural setting where my kids can at least work on the farm in the summers. My girls need it bad. So do I.