We're back from all our travels(St. Louis and the Oregon Coast) and I refuse to go anywhere in a car more than 5 minutes long for the next 3 months.
I'm on orders to take a nap every day...
Not too hard.
I'm pooped.
So if anyone wants to find me.  I'm here in my home. In my "comfy cozies"(according to Cache)
Cleaning, cleaning... I'm one of those nesters for sure. Instead of 9 months though, this babe is getting ONE. And so the life trend of the 3rd child begins.
I'm wishing that I could order in all groceries.
Maybe the Schwann man?
Pictures to come of Devin's graduation. I'm so proud of him.
But before I forget to record:
Cache's daily funnies (funny to me at least)
We just finished a quiet bowl of tomato soup. Quiet because Naomi is napping, and lets face it, she is the source of most chaos in this house.
So we aren't saying much.  Until...
Cache: "Mom do you know what it's called when the Whale shakes around a lot like dis?" (shaking his hand up and down.)
Me: "What whale?"
Cache:" Dus a whale dat Shakes up and down like dis."
Me: "hmmm I have no idea."
Cache: "Oh I know what it's called.  It's just called indigestion."
:) caught me off guard.
Before lunch we went to my now weekly doc appt. for this pregnancy of mine.In the car Cache always insists on me finding the "Chinese station."
I've had no idea what he was talking about until today I paused on the Mexican station.
Cache: "Yesss. I love when you play the Chinese station!"
I corrected him, telling him that it was the Mexican station. And he accepted it.
We finished listening to that song and then when the next song came on he yells again:
"Now THIS is a good Chinese song."
Me: "You mean Mexican song."
Cache: "Noooo mom this is definitely a Chinese song."
Then looking out the window he  kinda sighs: "I love Chinese songs."
I. love. Cache.
I'm excited to have another boy.
Well just one picture because posts are no fun with out pics and because it's the only
picture that doesn't need editing. 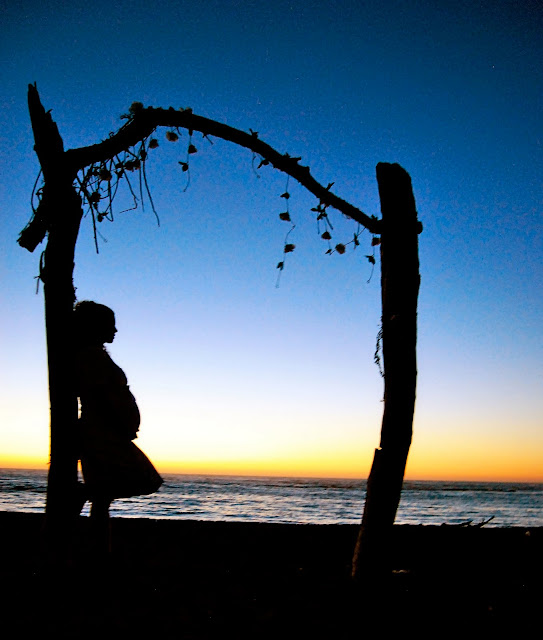 I would now love a sound machines that has waves.
Then I could go to sleep thinking of this place every night.
That would be wonderful.
Posted by Amie Orton at 2:29 PM

Love the picture! Good luck with everything! Almost there!

email me with where you guys are at and if I have time while I'm over that way Wednesday, we'll drop by and say hi...if that's okay. (:

It really is a good picture : )

I also love the photo, Where is it taken? So fun that you guys are having another little Cache. Love you guys.

You WISH you had my sound machine... yeah that one you mocked me for in college... it's all coming back! I often think of you as it is dark and I don't have in my "eyes" and I can't see and i think Amie would love to watch me and giggle right now and of course you would have also added something to the scene to make it a bit more complicated for me! Ha ha still makes me smile a quirky smile... I love your pic... and can you believe that next time I go to visit my family in Boise I will get to see you??? Crazy wild and fun, probably not for some time though because, well just because! Oh and when you get a chance you need to go to Gallo Giro in Kuna, you will love it.

love the picture! you're almost there, i can't wait!

Wow that picture was worth waiting for... very surreal and beautiful.

Cute one of you guys at graduation. You are a very beautiful pregnant girl. I love all your hair and the contrast of your white dress. I wish we could compare bellies!

I don't know why but seeing you both stand so tall and straight reminds me of halloween in your what were they farmer type costumes? So cute!