We've been doing the every other year christmas switch since we were married three year ago. This year it was an Orton year. Here is a small glimpse of our time in La Grande. 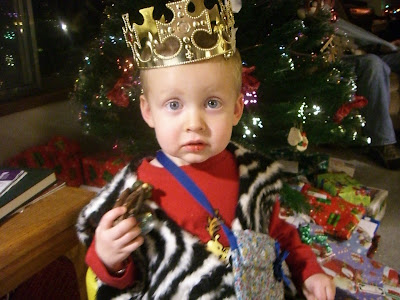 Kyle arguably the wisest and the oldest of the the three wise men he came bearing a gift of the a snow globe. And like the other two wise guys refused to wear this crown (except for this blitz second for the picture) Our wise guys this year preferred cowboy hats. 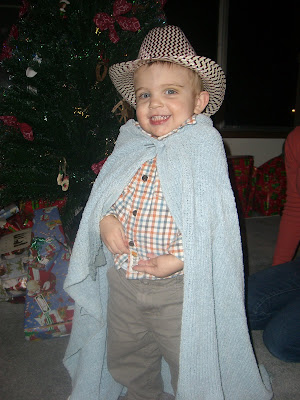 Noah happiest of the the wise men sported his favorite blue blankie as his cape.. and came bearing gifts of blue plastic mermaid clam shell... 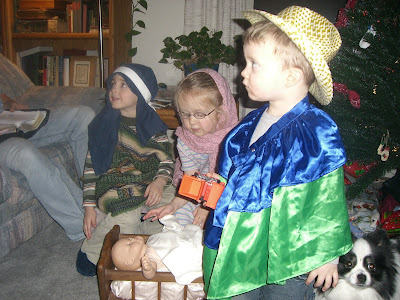 Cache the most stubborn of the wise guys would not look at the camera.. angry because he couldn't stand on the couch like his cousin the Angel...he came bearing gifts of an orange Bob the builder dump truck. 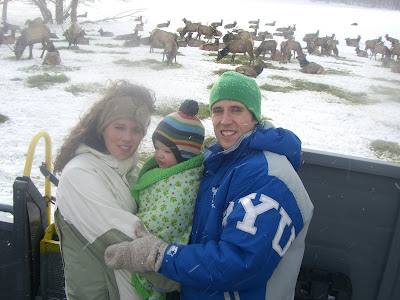 Christmas Eve day we went way way up to NOrth Powder where these wild rocky mountain elk come out of the woods to feed. This family offers sleigh rides out to see them. It was the coldest i've been in a very long time but so cool to see them so close. And the most beautiful snow covered bridge that we crossed on our sleigh. Cache being a little obsessed with Christmas as he is would not be convinced that these were not Reindeer but elk...We kept saying "No Cache they are elk" I thought he finally caught on when he said "oh no weindeer!" but the rest of the sliegh ride he was yelling "Elves! Elves!" 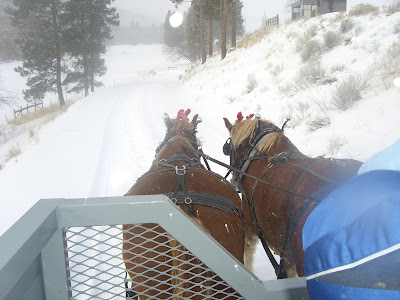 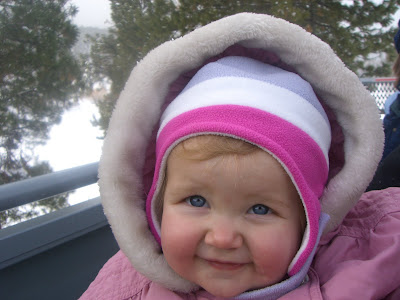 This is Krista...our niece,, she smiled and laughed the whole time all through the bitter cold! I was almost crying! But she was all smiles. 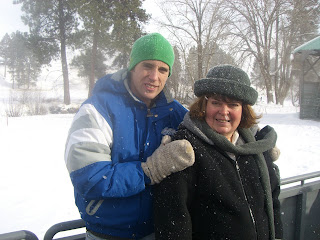 Devin Keeping his mom warm. What a good boy..Devin wants me to mention that he is wearing his dad's coat.. haha.. he is funny.. for some reason he doesn't think its as cool as him..

I love your posts, Amie, you just don't post enough. I love reading them and I really miss your personality and you! Looks like you had so much fun in Oregon!

I didn't know you guys went on a sleigh ride. So fun! And so Christmasy. What's with our little Cache and Claire being so stubborn somtimes? Must be a Spratling thing. Totally just kidding! I know Claire gets most of it from me. Miss you guys!