My parents headed south to Arizona and Devin's parents are on a mission...
So we were Christmas Orphans this year.
We still had a sweet little Christmas here. Calm and Cozy. 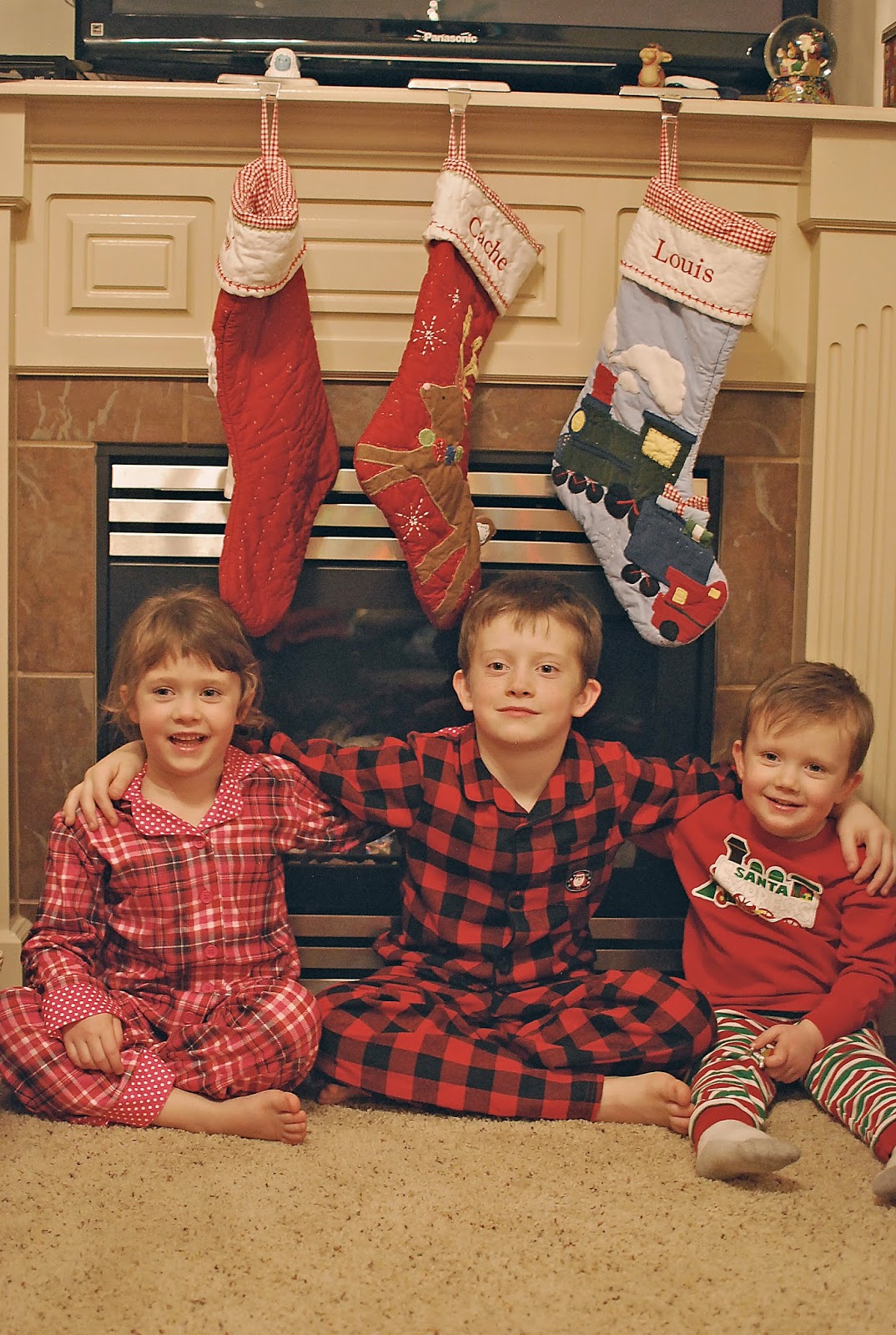 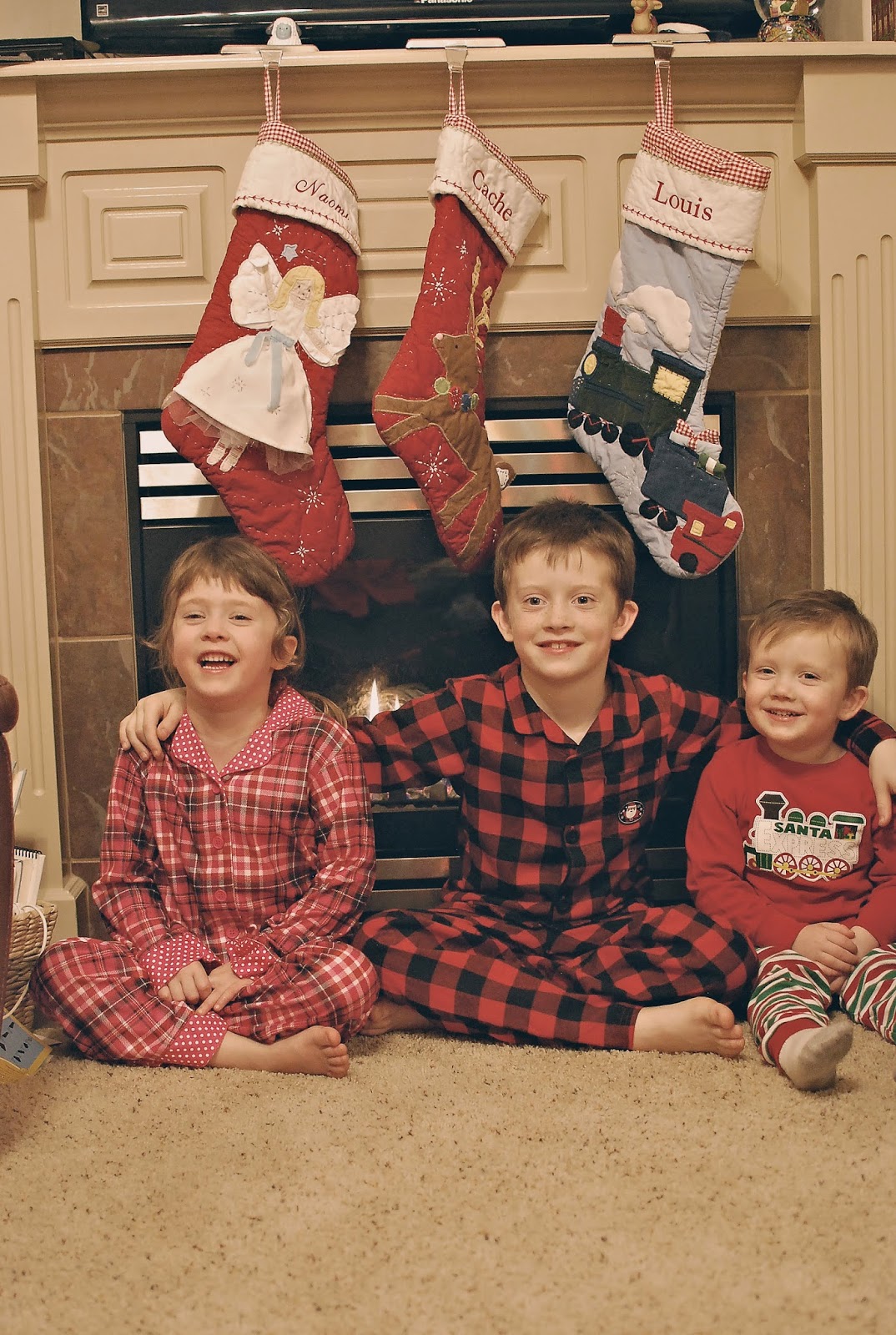 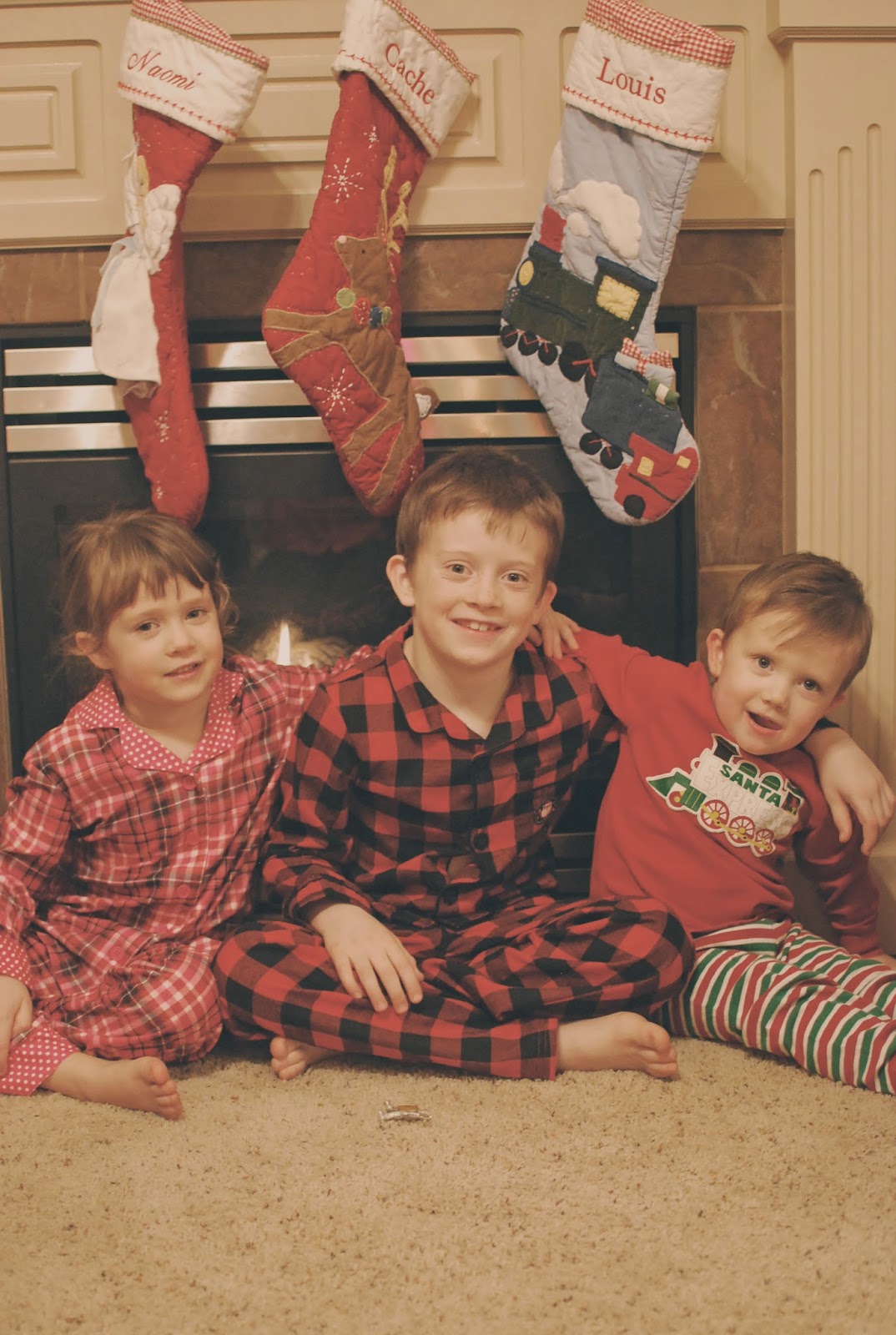 Devin's Family always did a take it easy type of Christmas Eve and a big dinner on Christmas day.
My family did the opposite.  So we combined our traditions and took it easy both days. 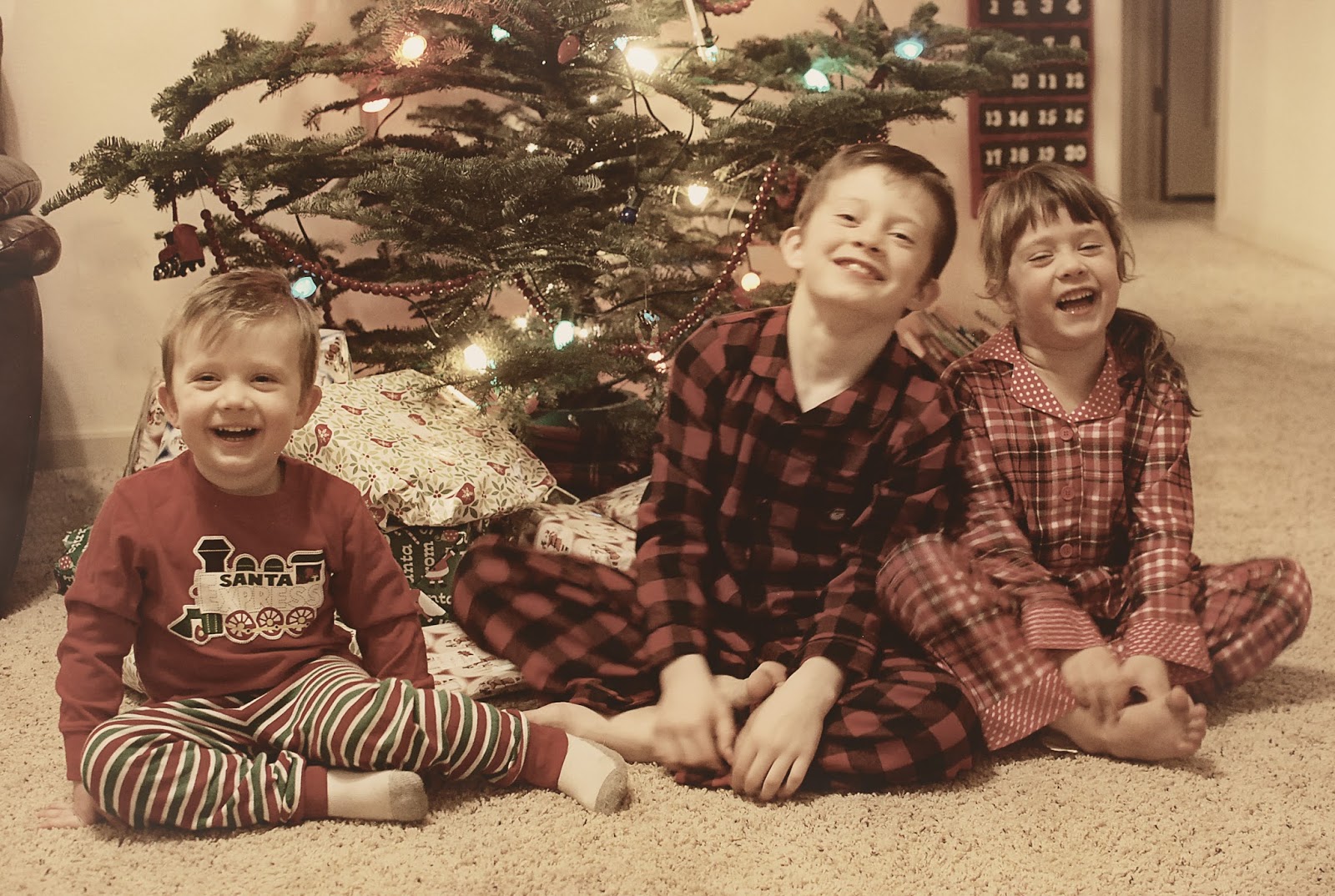 Devin did cook a turkey Christmas Eve and we just formed our meals around that for the next week. It was nice. Devin did spend most of Christmas day making a soup out of the turkey bones.  It was delish! And he was pretty proud of it. :) And according to his studies kept us healthy this season. 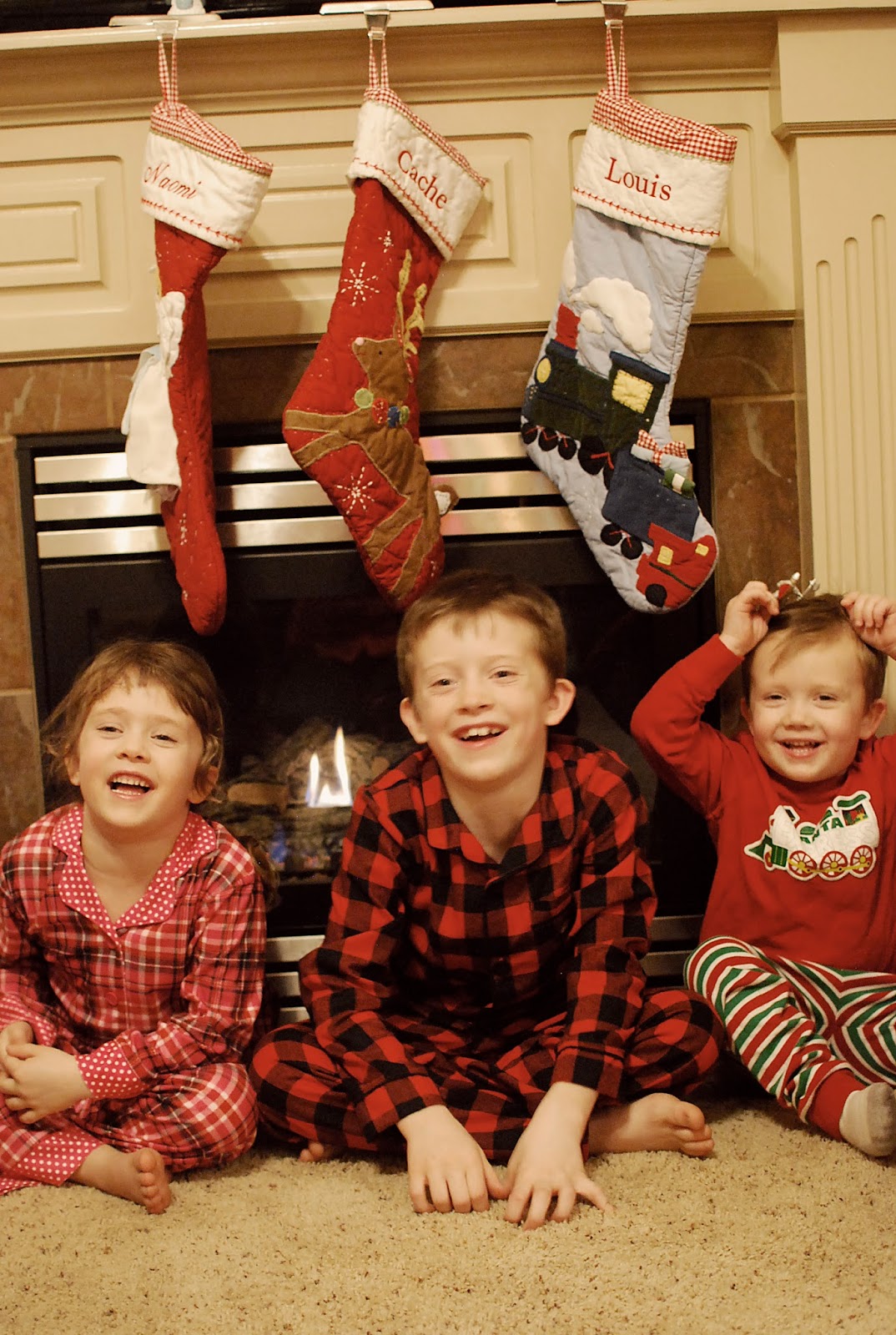 We had Christmas Eve with Dylan and Sara(Devin's bro) and their 3 boys.
It was.. energetic.  I have a video of the Nativity-turned-dance party, but here is the only picture I took.
Naomi being the only girl in the Nativity was Mary and wanted no one else but her Daddy to be Joseph. :) 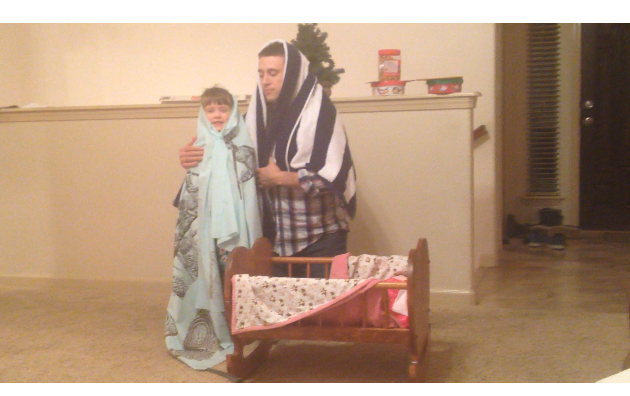 Buffet dinner of cheese balls, turkey, egg nog, popcorn and stuff like that.. and we played some fun board games. It was a nice night. We tracked Santa on the Internet, Devin helped Naomi put out her reindeer food she made of oats and sprinkles, then went to bed.
Santa Came! 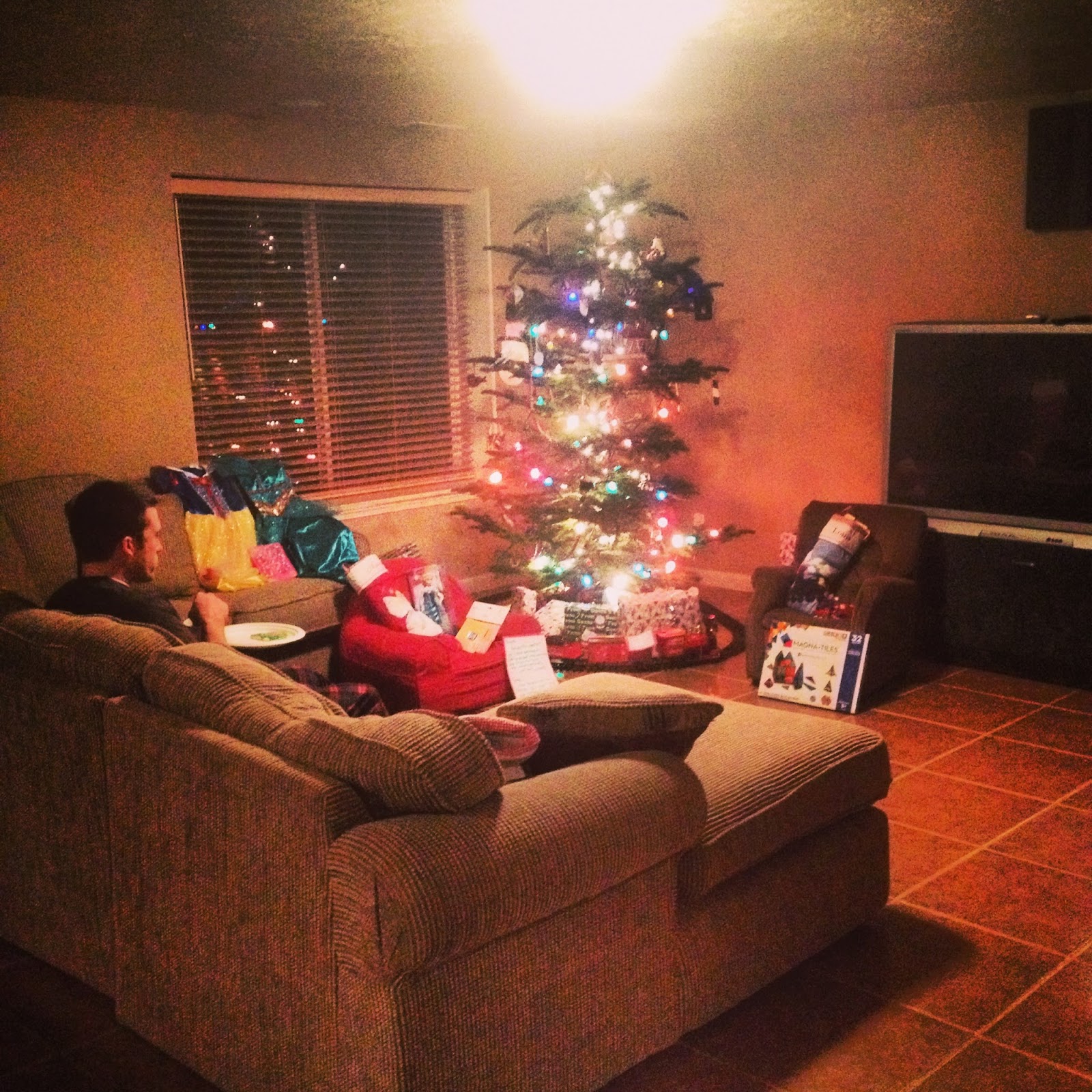 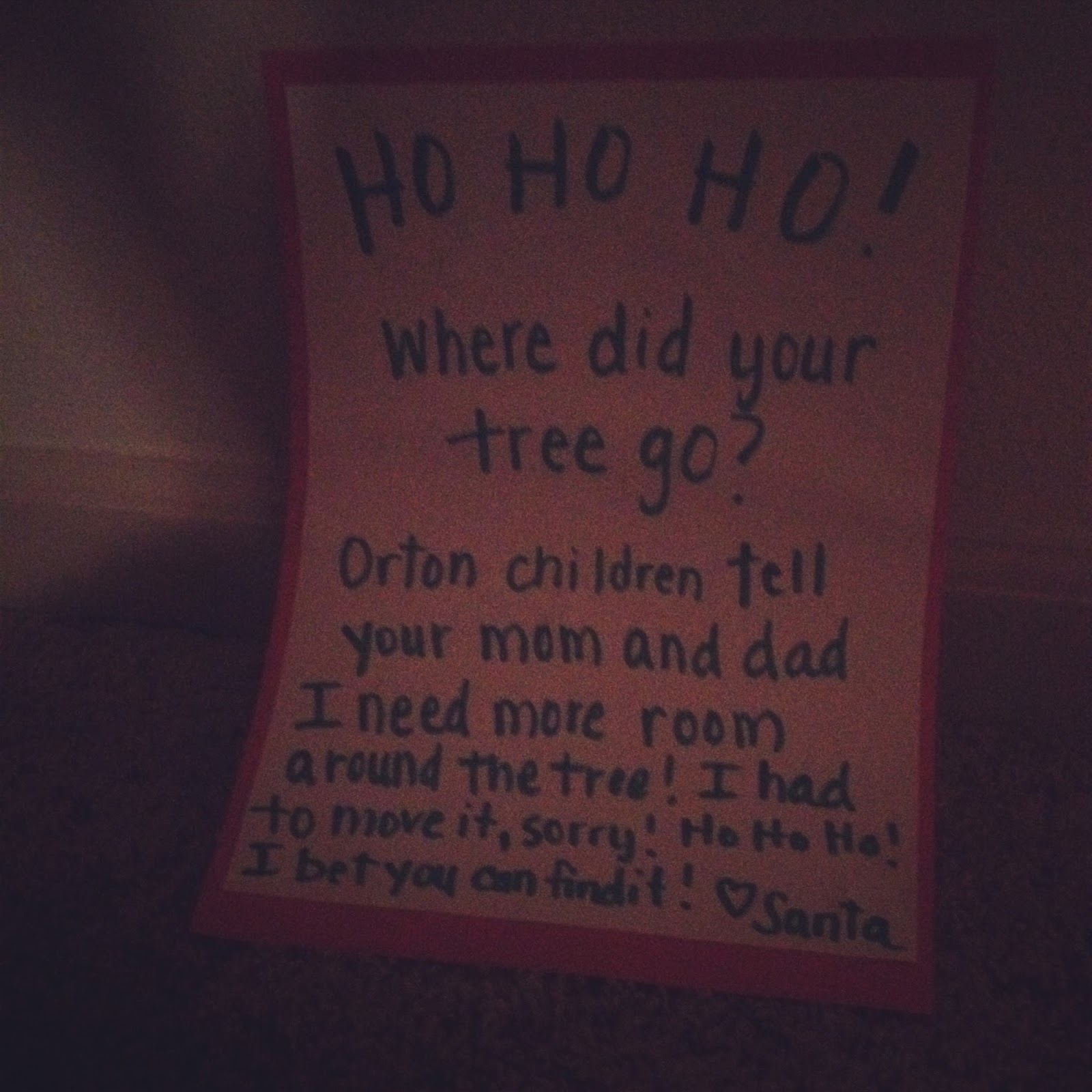 Mrs. Clause convinced Santa to move our tree to the basement in the wee hours of the night.
The usually sharp Mrs. Clause had one too many cookies, and missed that the tree is 10ft  and the basement ceilings are 8ft.. resulting in spilled water and some hedge trimming  at 1:30 am! Good thing Santa is a saint :) haha.
Funny funny memories. For them I mean. 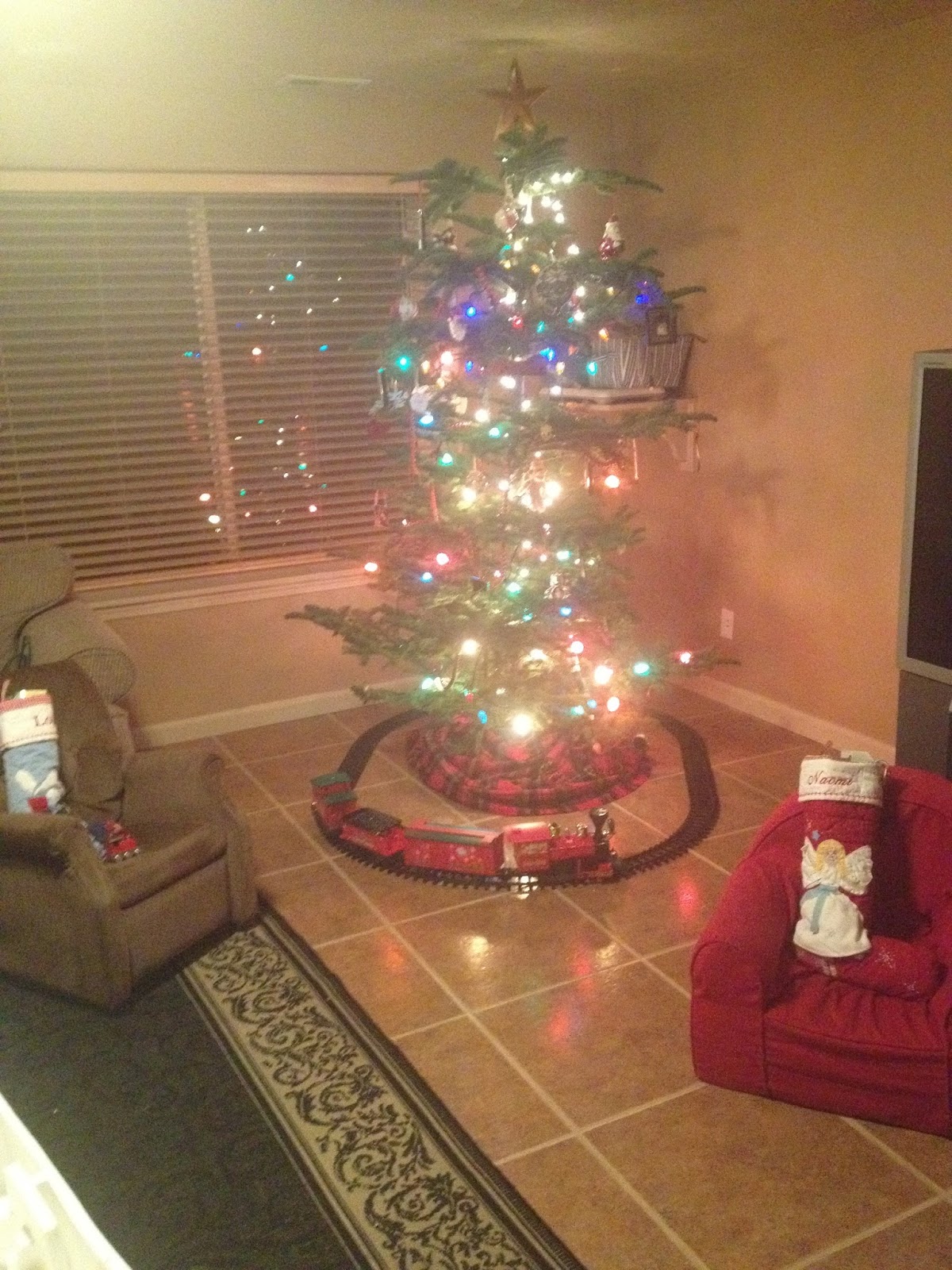 Cache only asked for an Ipod touch.  He got a go-cart instead.
Some of his other spoils were: a rainbow loom and Percy Jackson books. 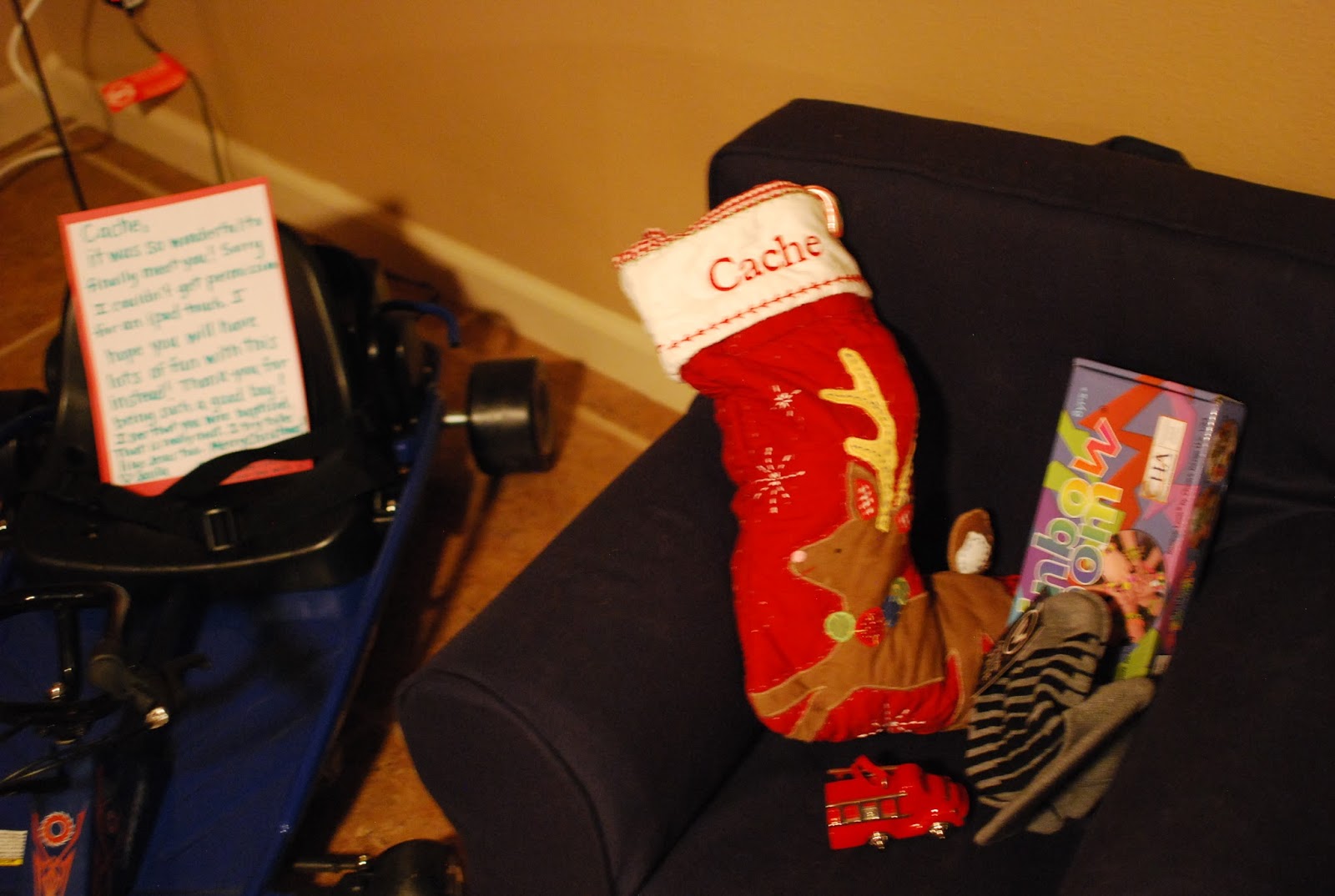 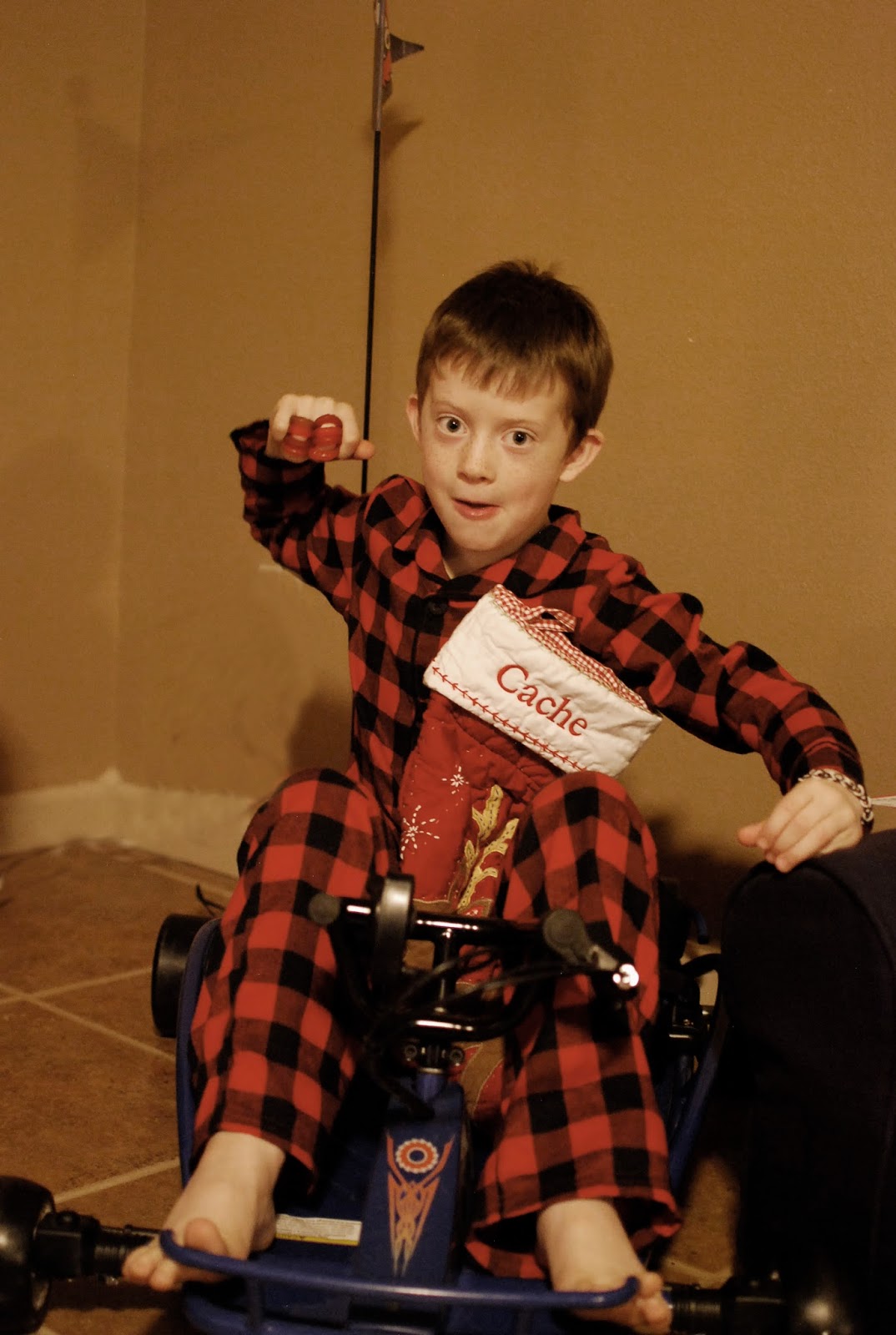 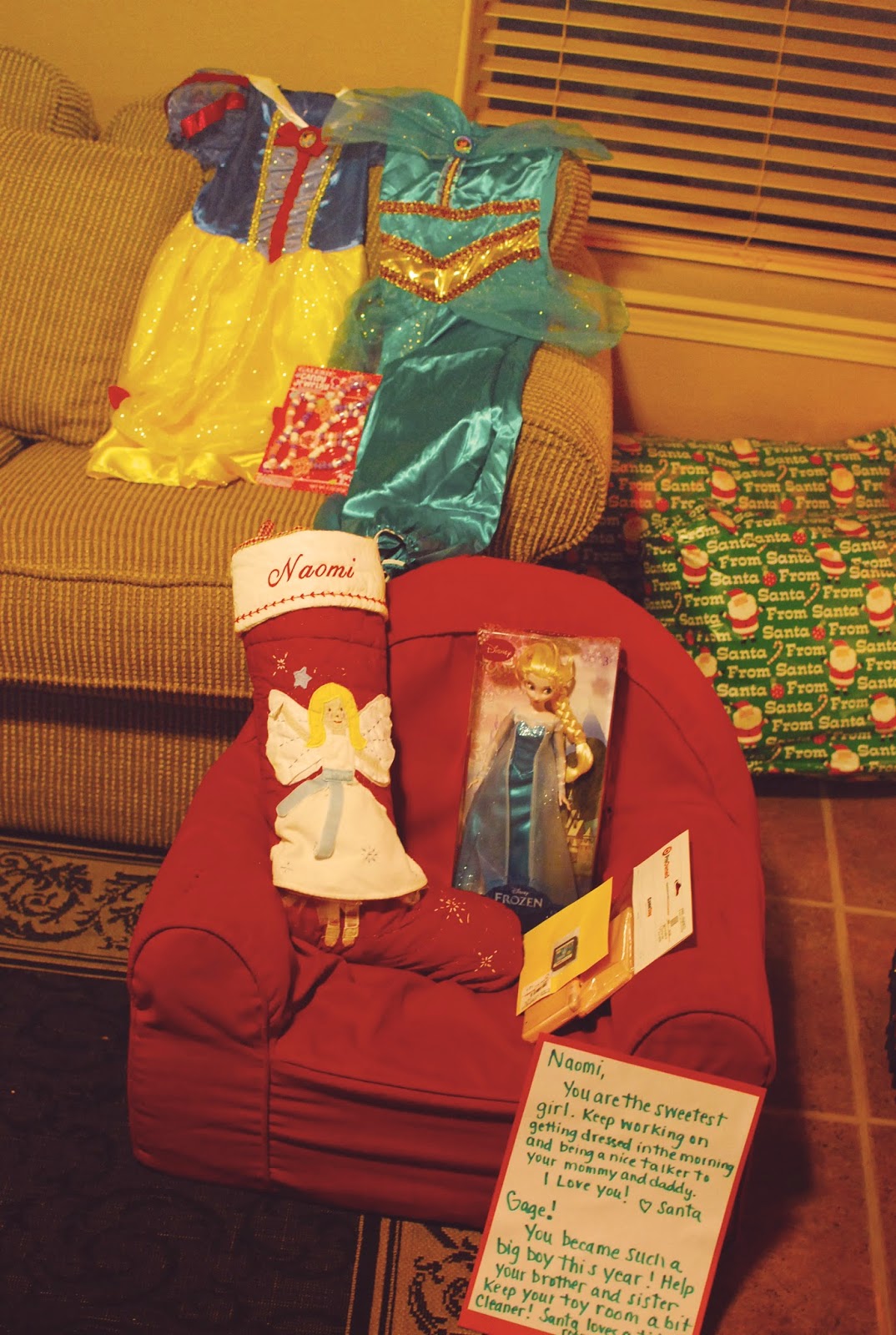 This girl got what she wanted. An Elsa doll. 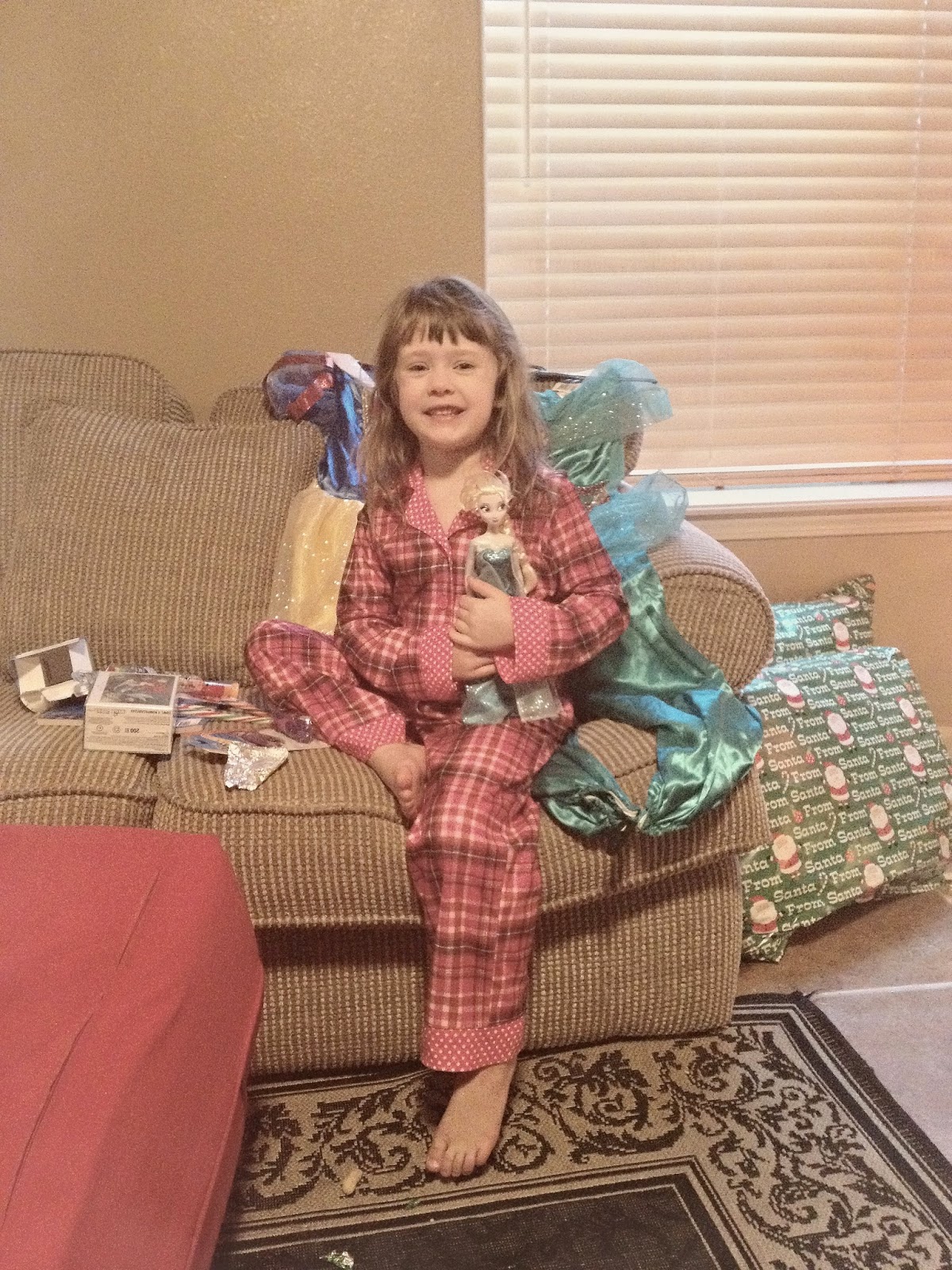 Non intentionally, Gage had a very train-y Christmas. He just loves them! 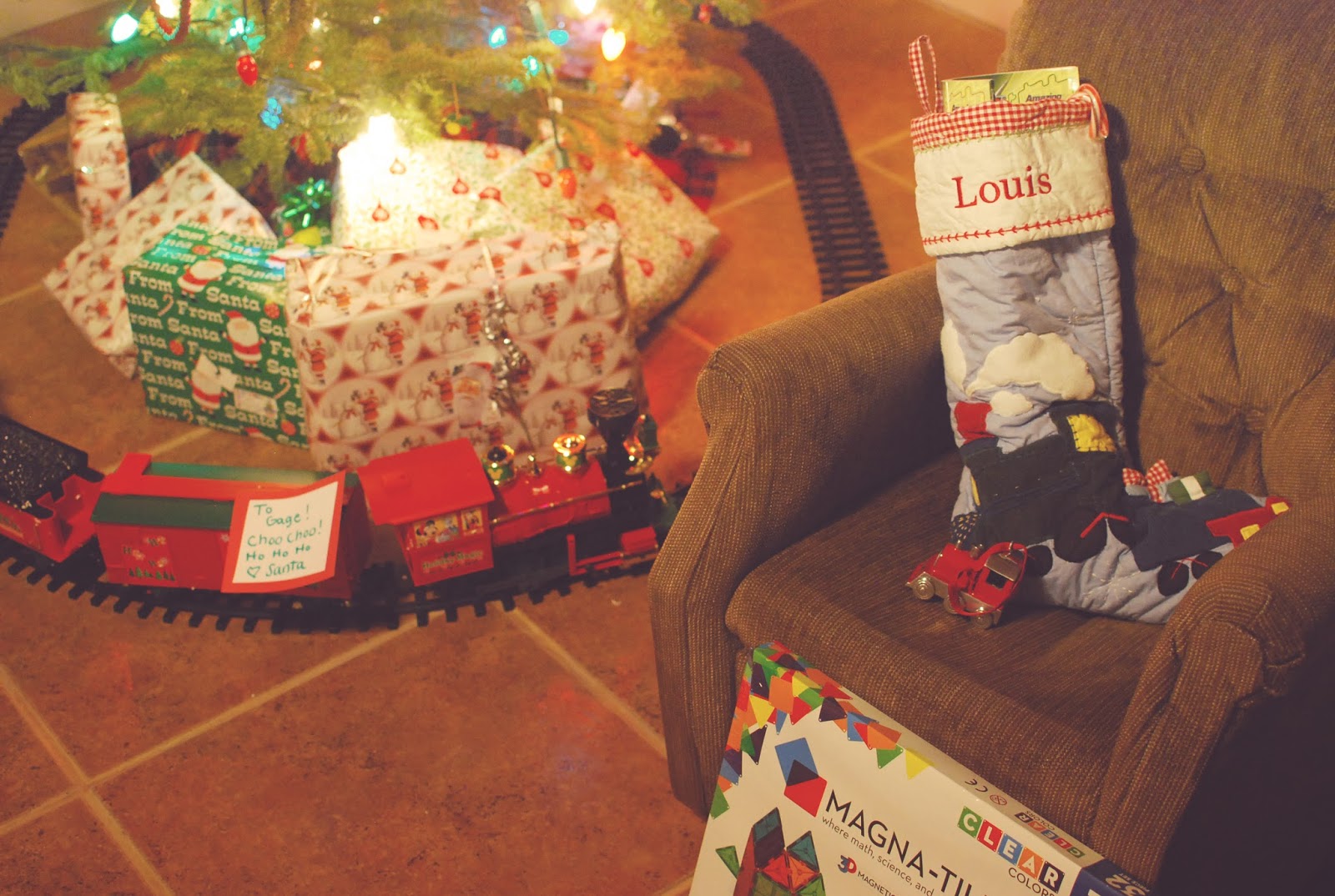 In case you are wondering about Gage's stocking... I ordered it before he was born. He was our "St. Louis baby" and we thought that's what his name would be. :) We still call him our little Louie at home. So for now we'll keep it. 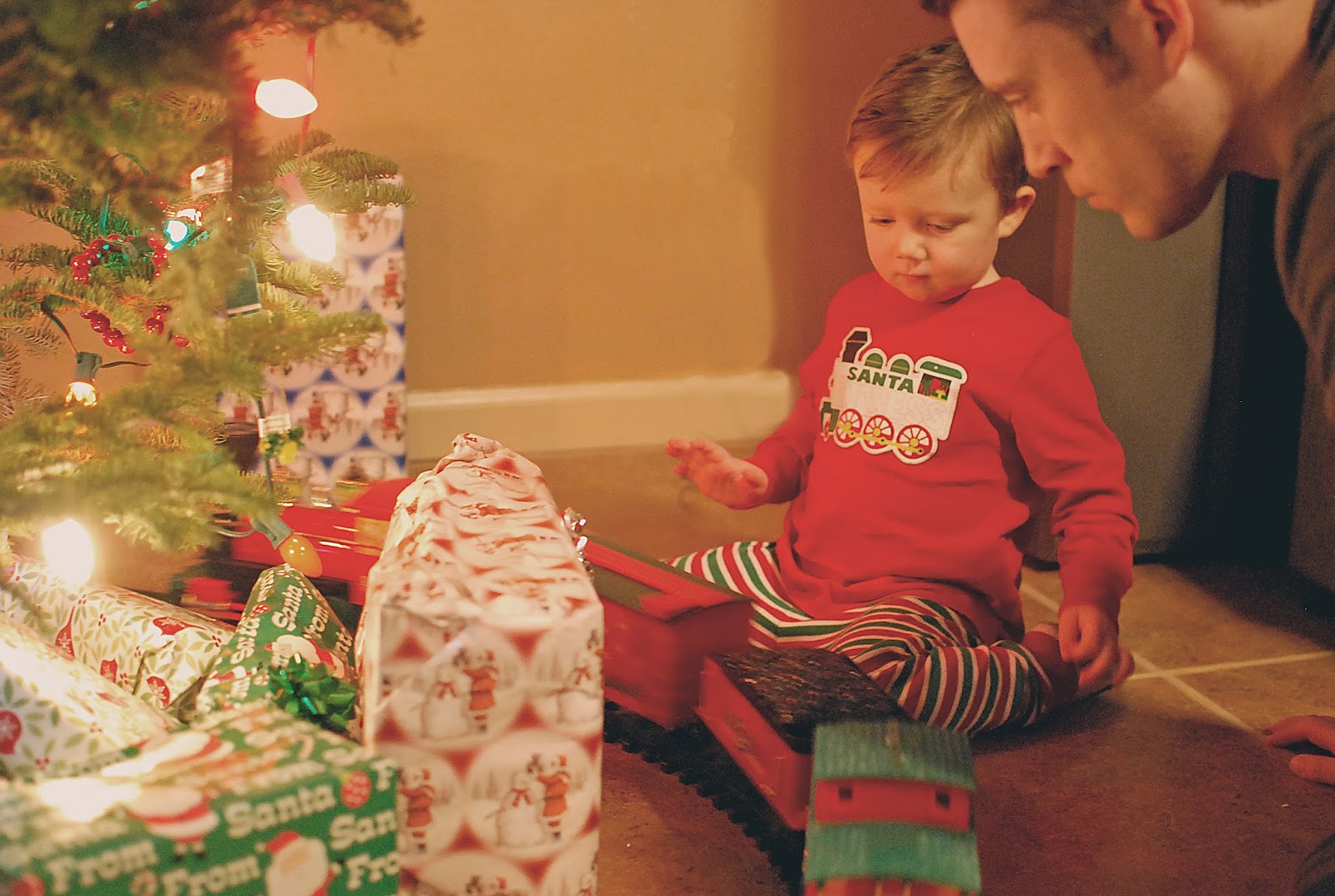 Santa hit the button right on the nose with this train. Gage was the last one to wake up around 8:30 and he came down, spotted the train, and began yelling "A choo choo train!" Then he got down to business playing with it yelling "CHOOCH!" As it went round and round. He was so intense about his train you couldn't even talk to him or touch him he just was zoomed in on that thing.
It was pure magic in my book. :) 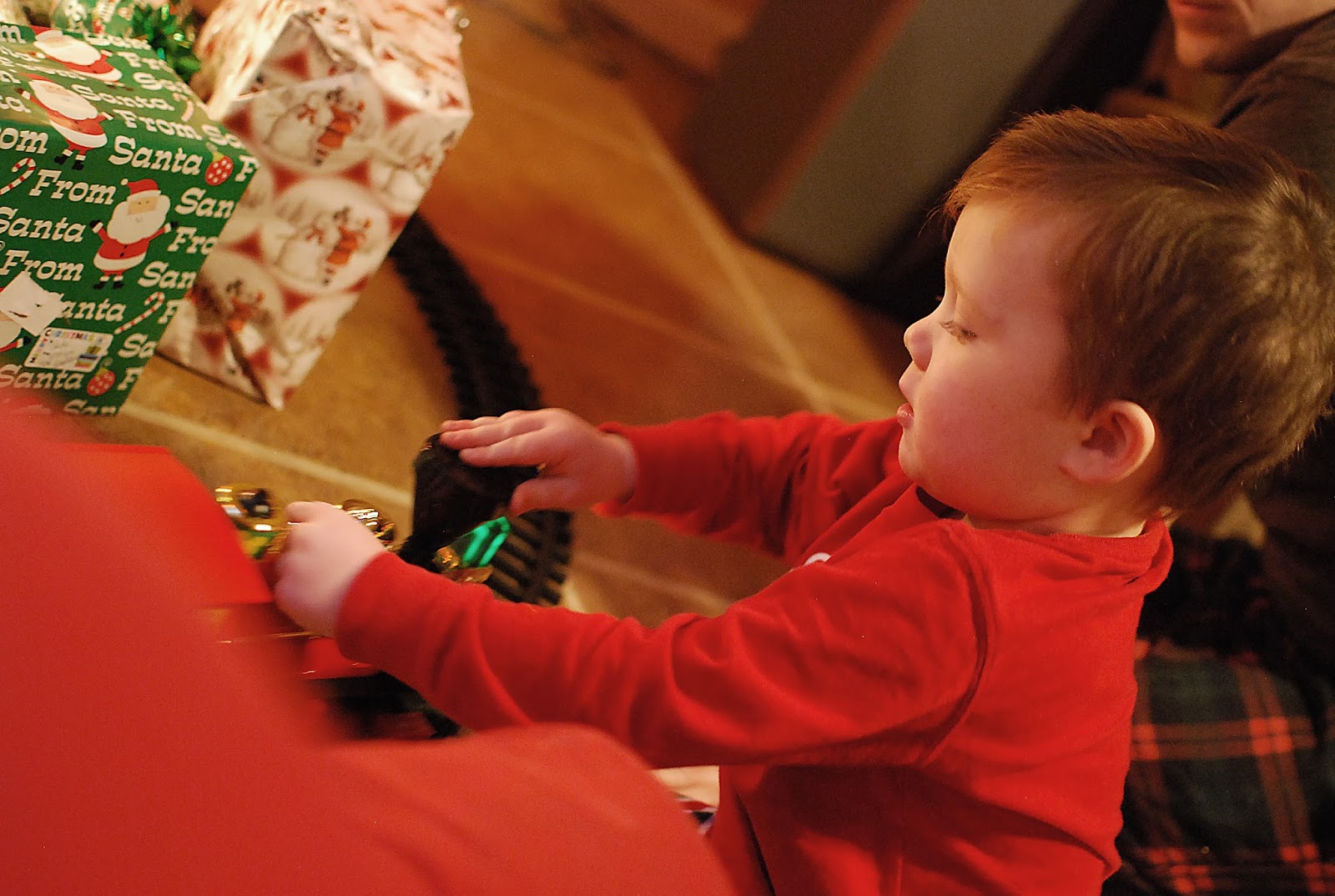 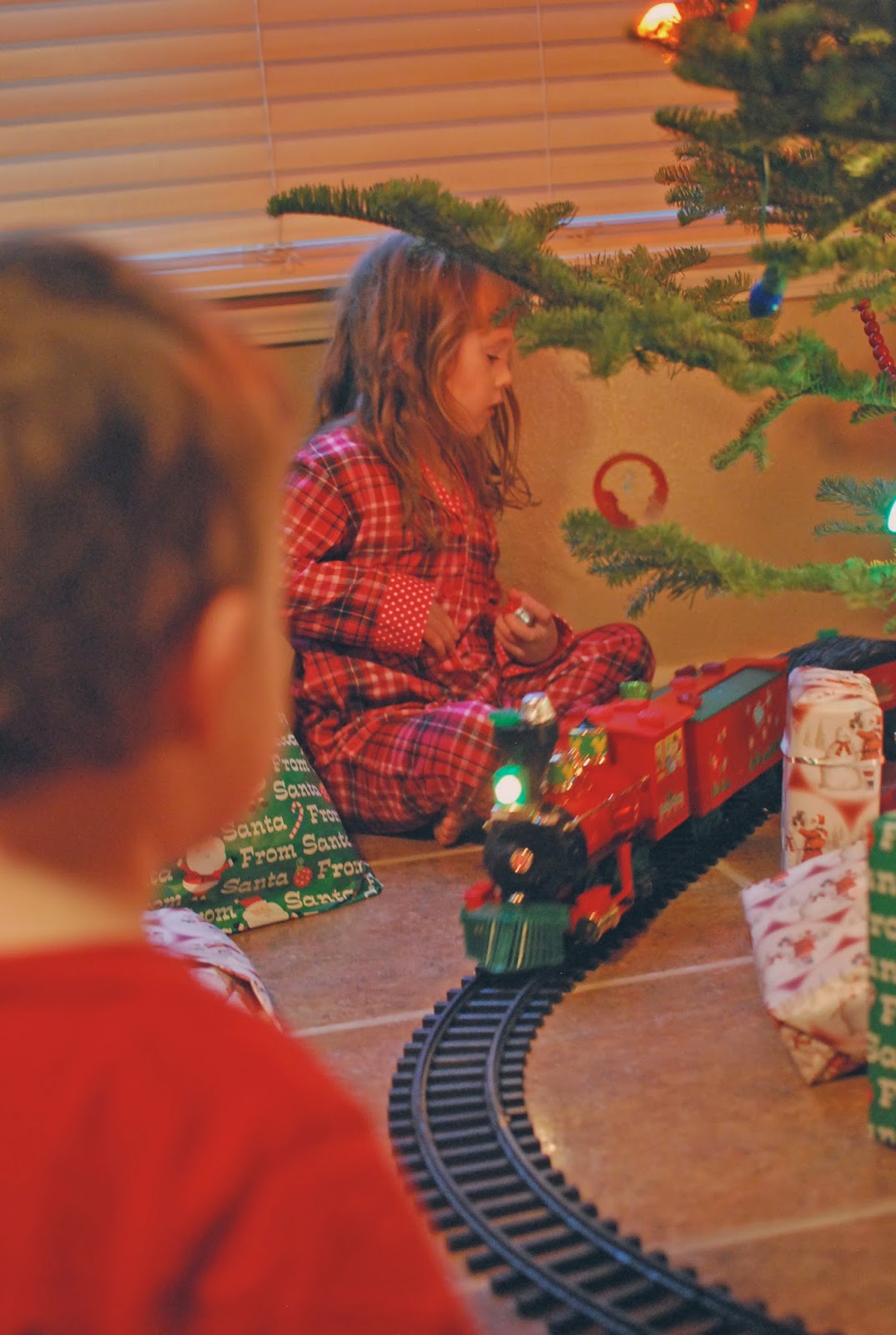 Then he figured out the train would still run OFF the track. And that made all our lives a little easier since we weren't having to re-track it every 3 seconds. 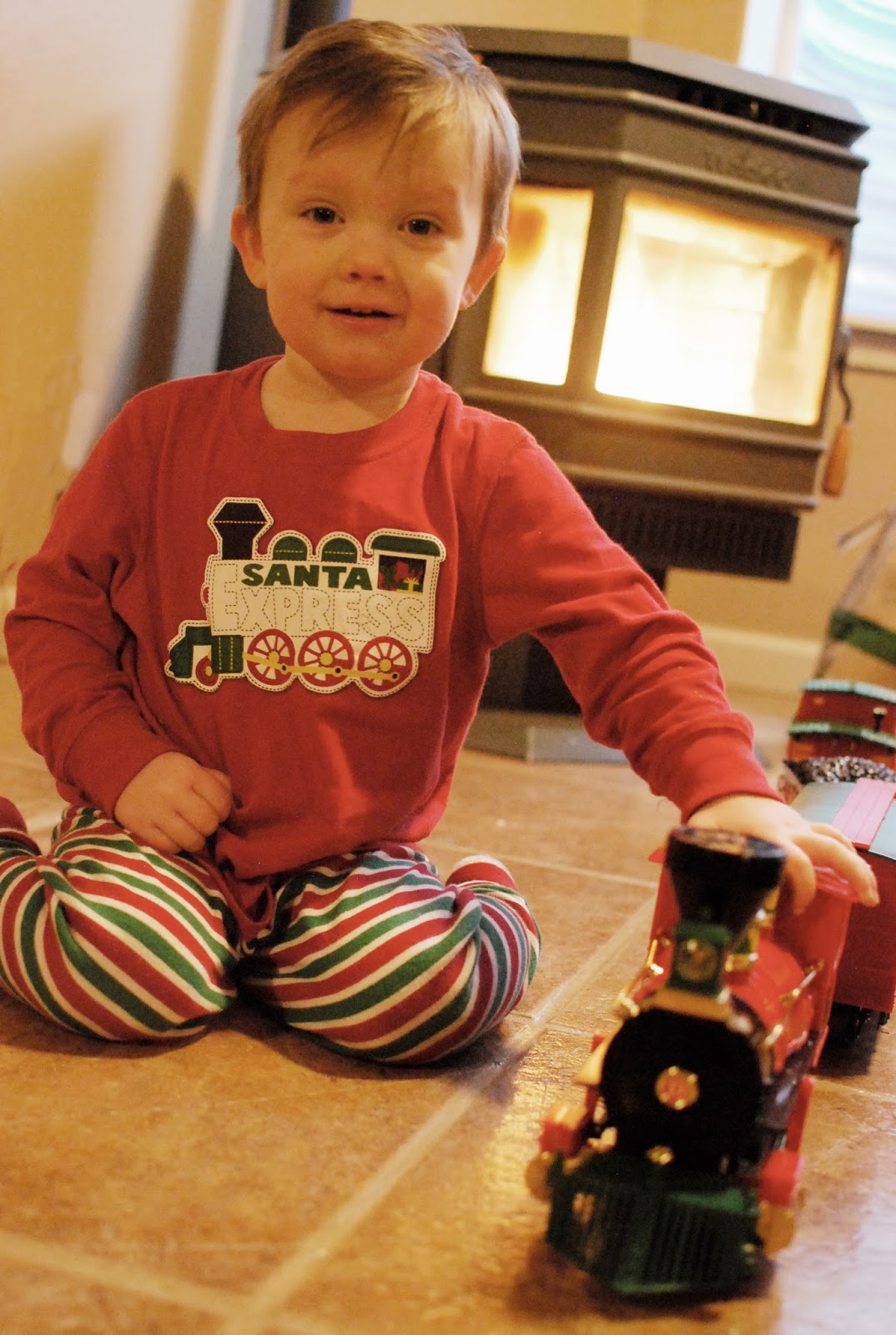 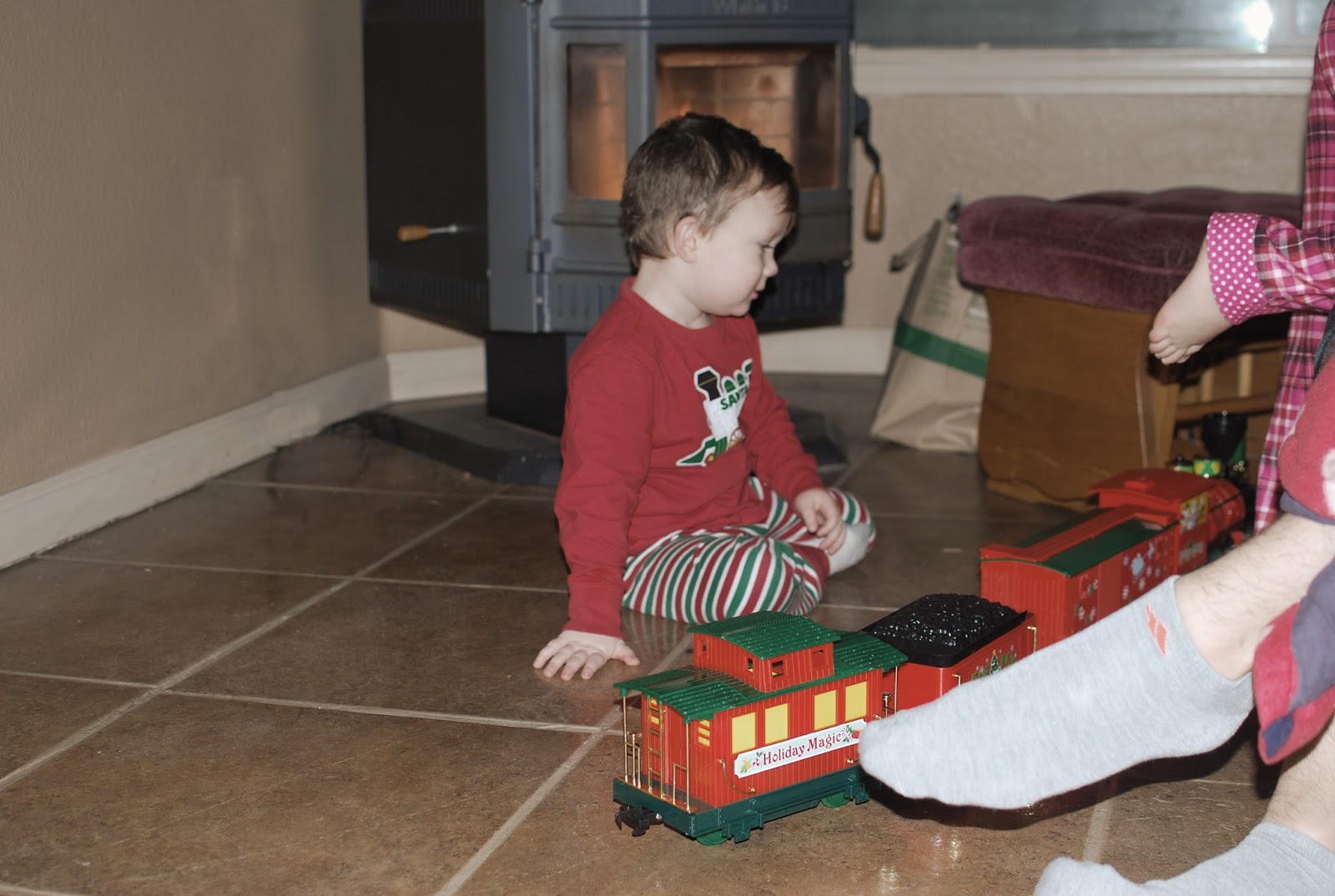 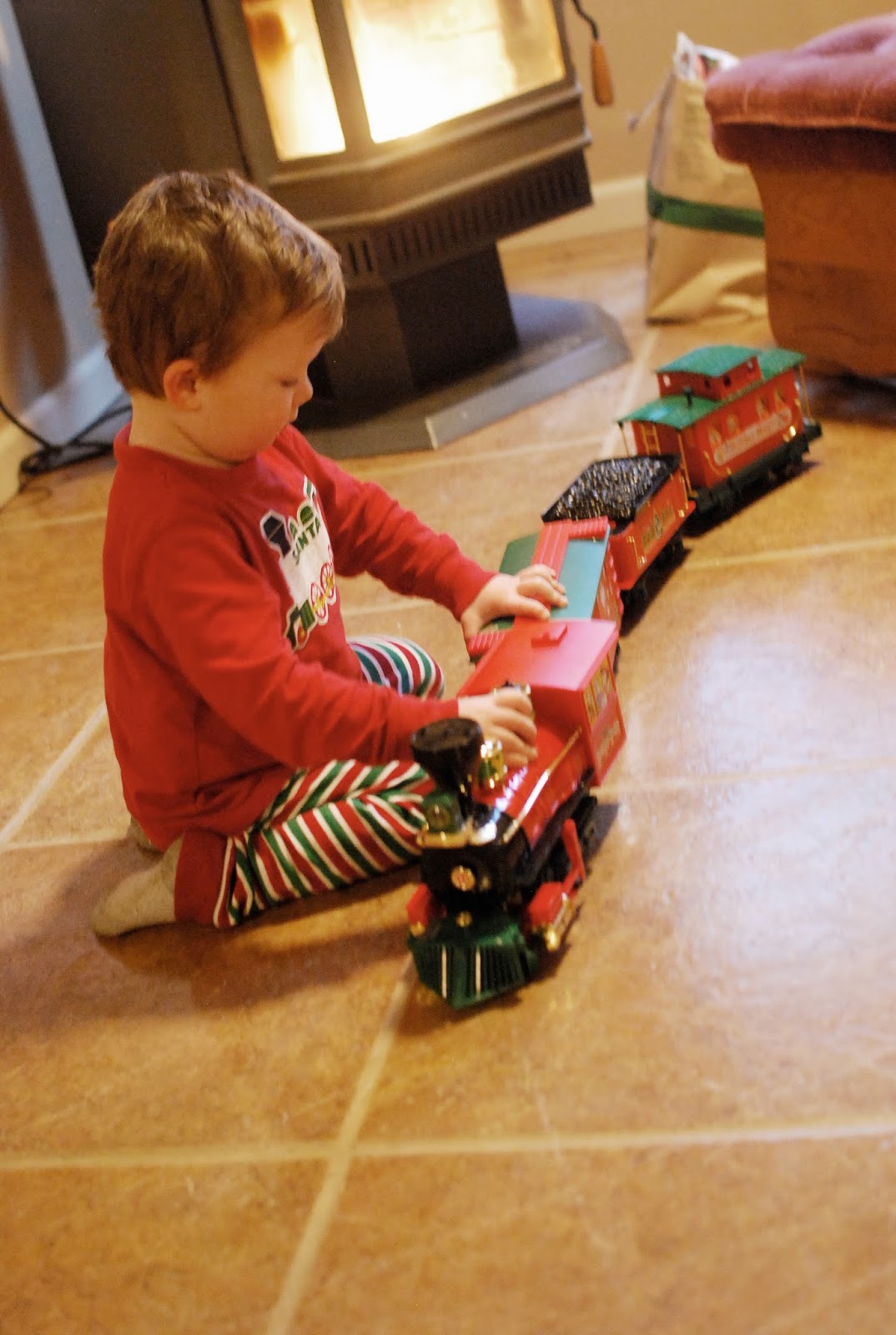 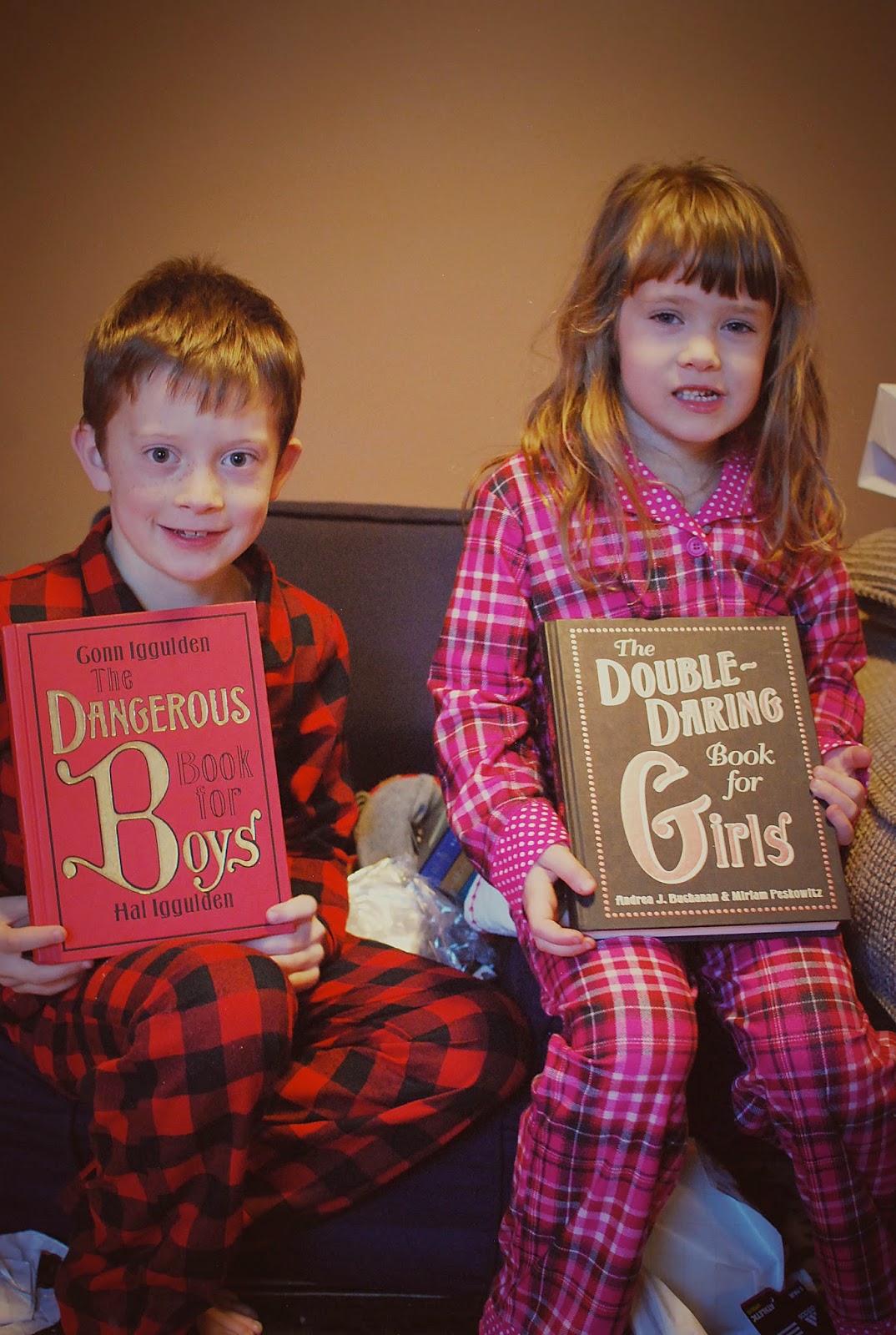 OH wait, Santa brought me something too! Surprised me to tears. OH I love it.
No I'm not trying to show I'm pregnant like all my siblings thought when they saw this picture. I'm just trying to balance on the couch and look good... it's a hard job. 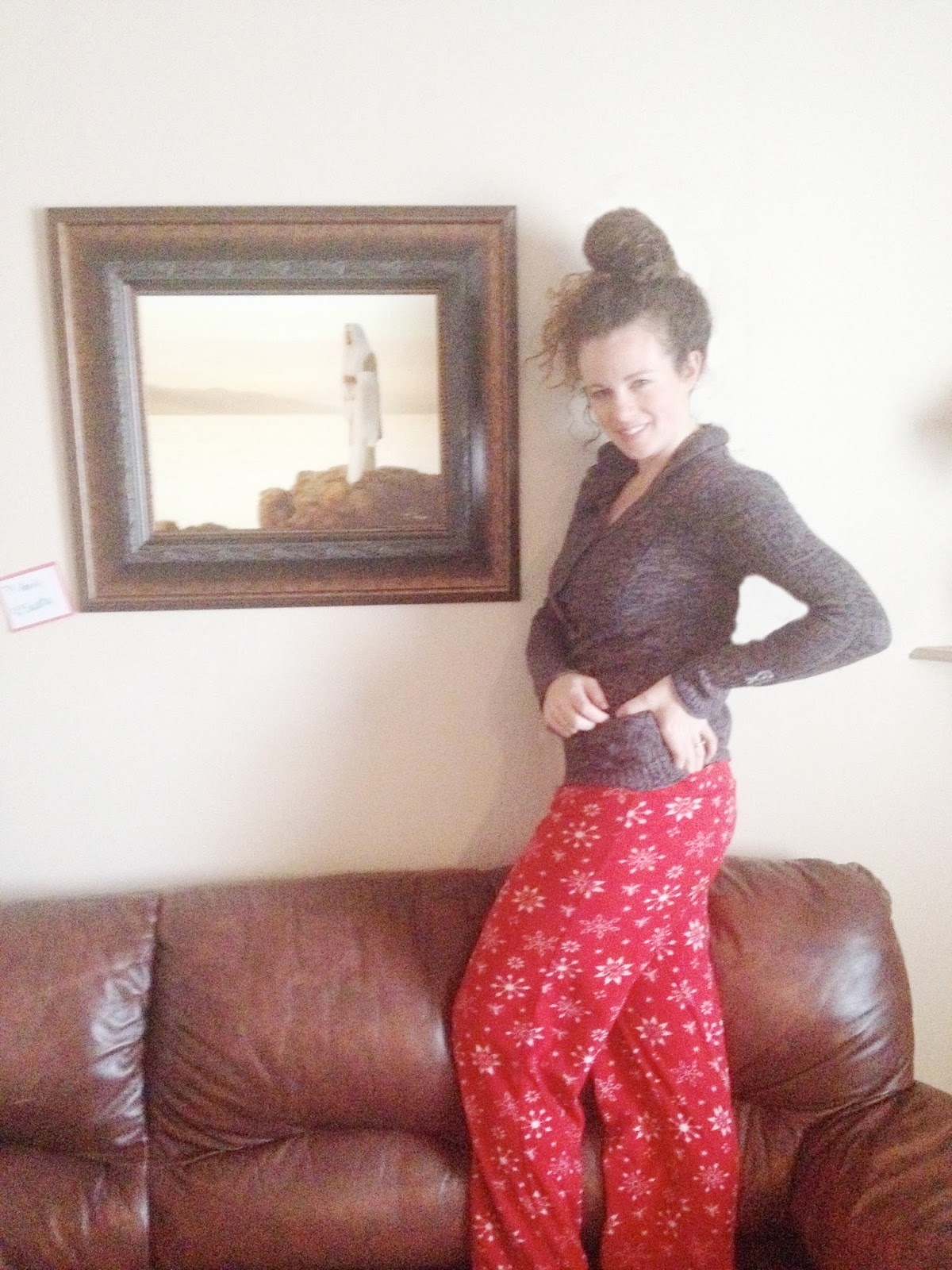 Devin was not forgotten.   The kids got him a Costco Pecan pie! They really picked it out themselves and wrapped it and hid it in the garage. 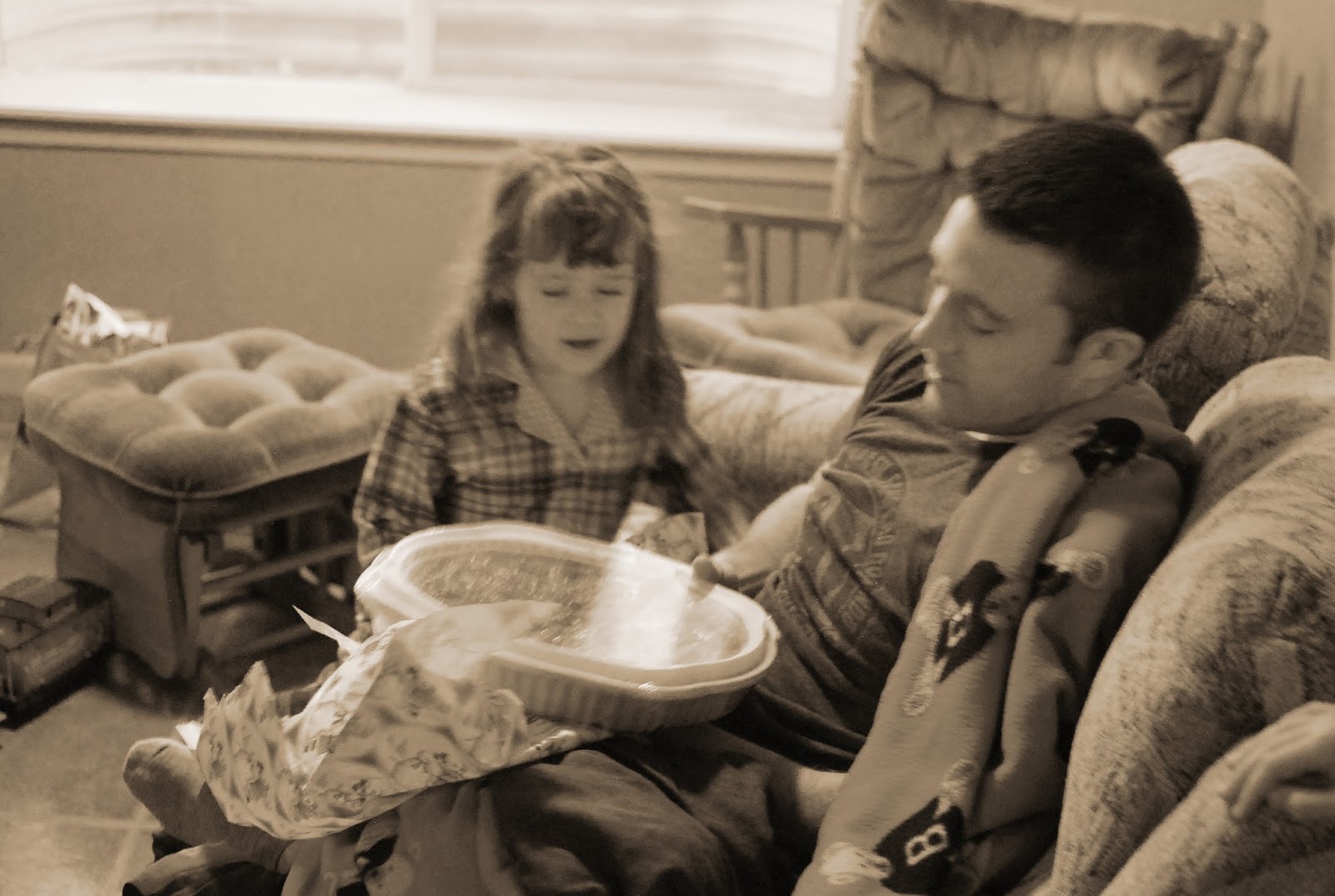 He also got some Nike dressier clothes he can wear in the office and to sporting events.
The rest of the day: 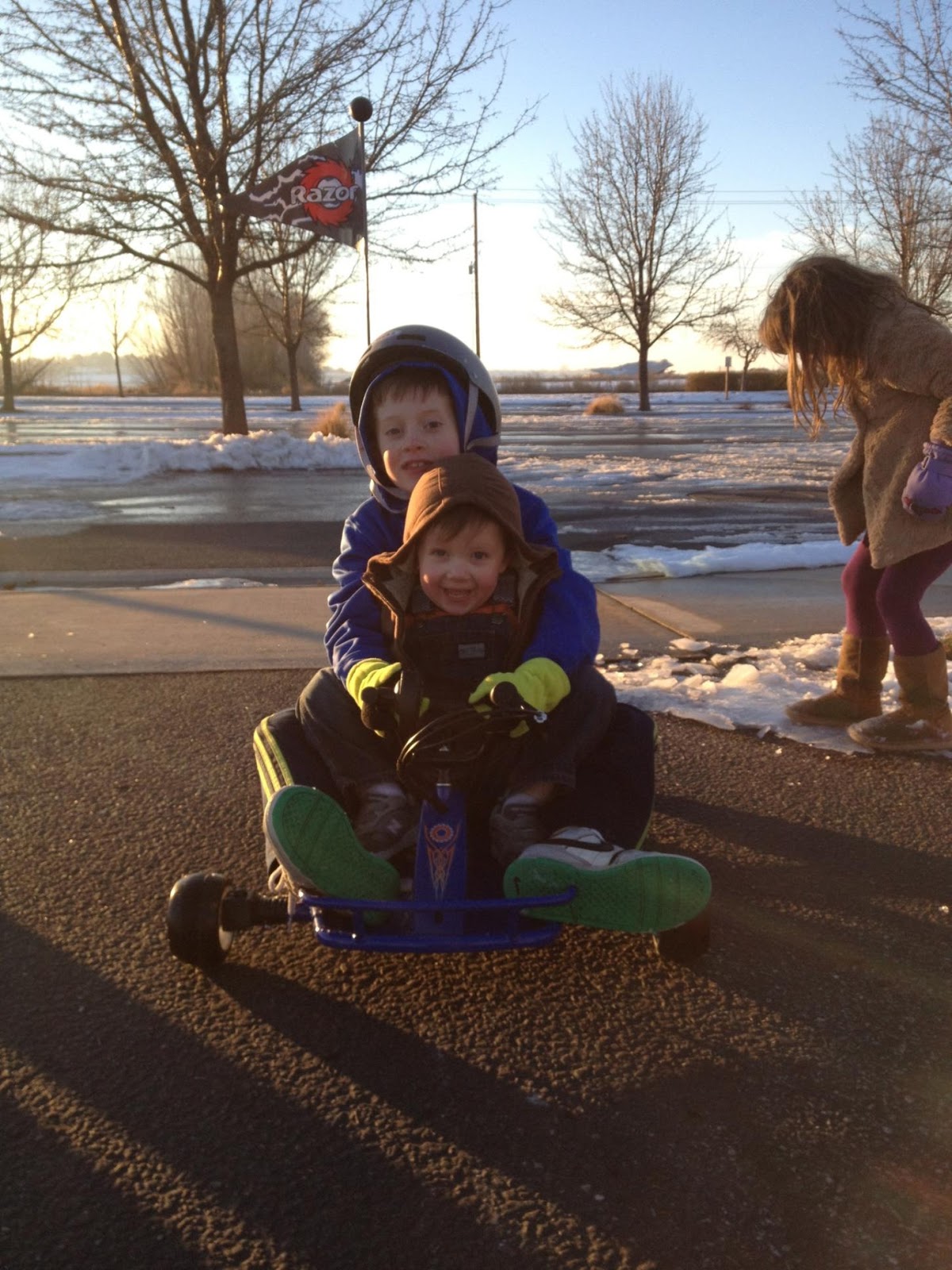 I will never forget Naomi zooming off in the go-cart in her little fur coat, Cache's helmet 3 years too big, and her pink gloves.  As we were instructing her on where the gas and break were she just TOOK OFF. And then she just kept going.   I was so scared and surprised I couldn't stop laughing and running, and yelling: "Devin get her! Get her!" Even though neither of us could ever catch her.  Legally she is too young to be driving this thing. It is really fast. And she figured out how to spin cookies and flip herself around and would giggle and giggle. No fear at all. My kids are crazy! 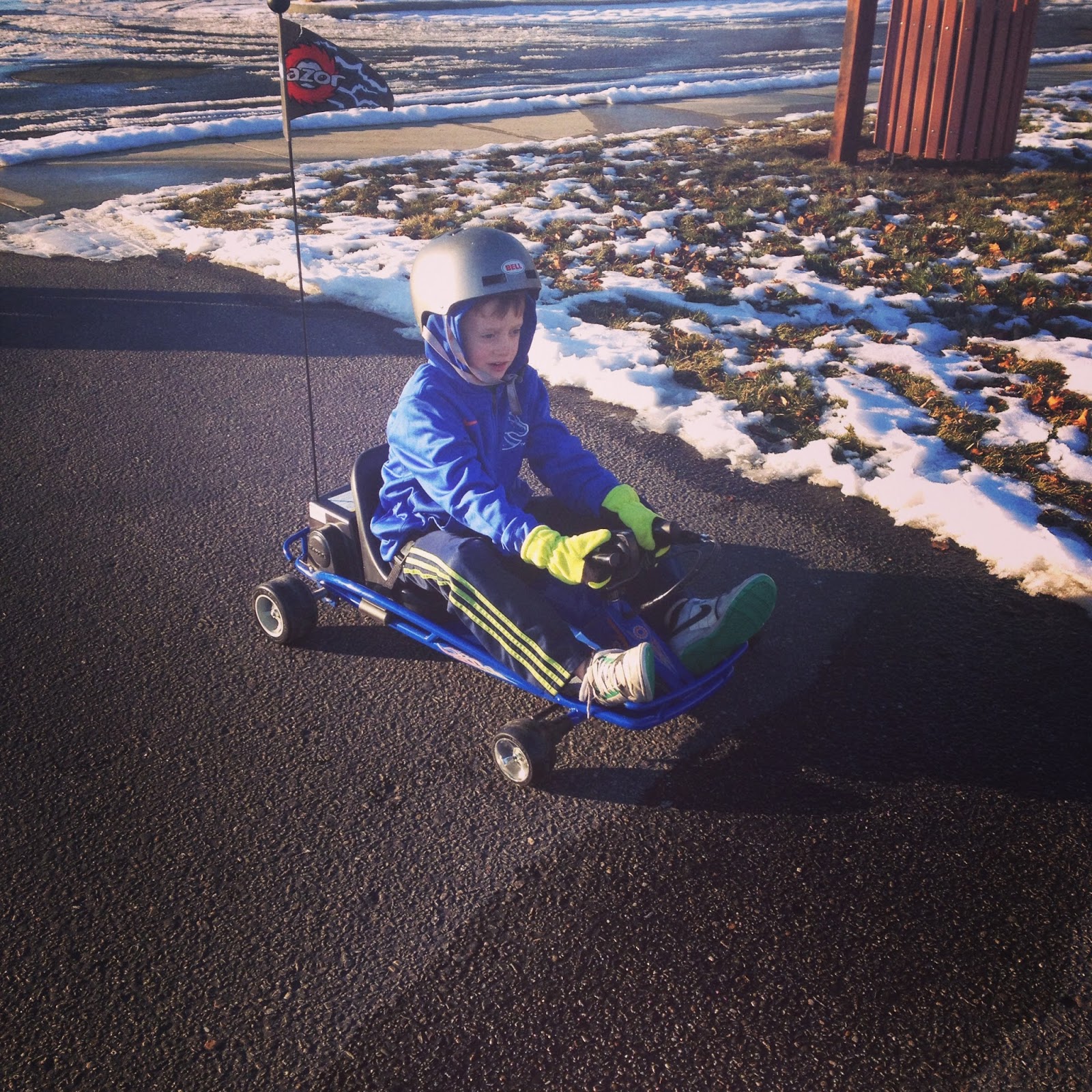 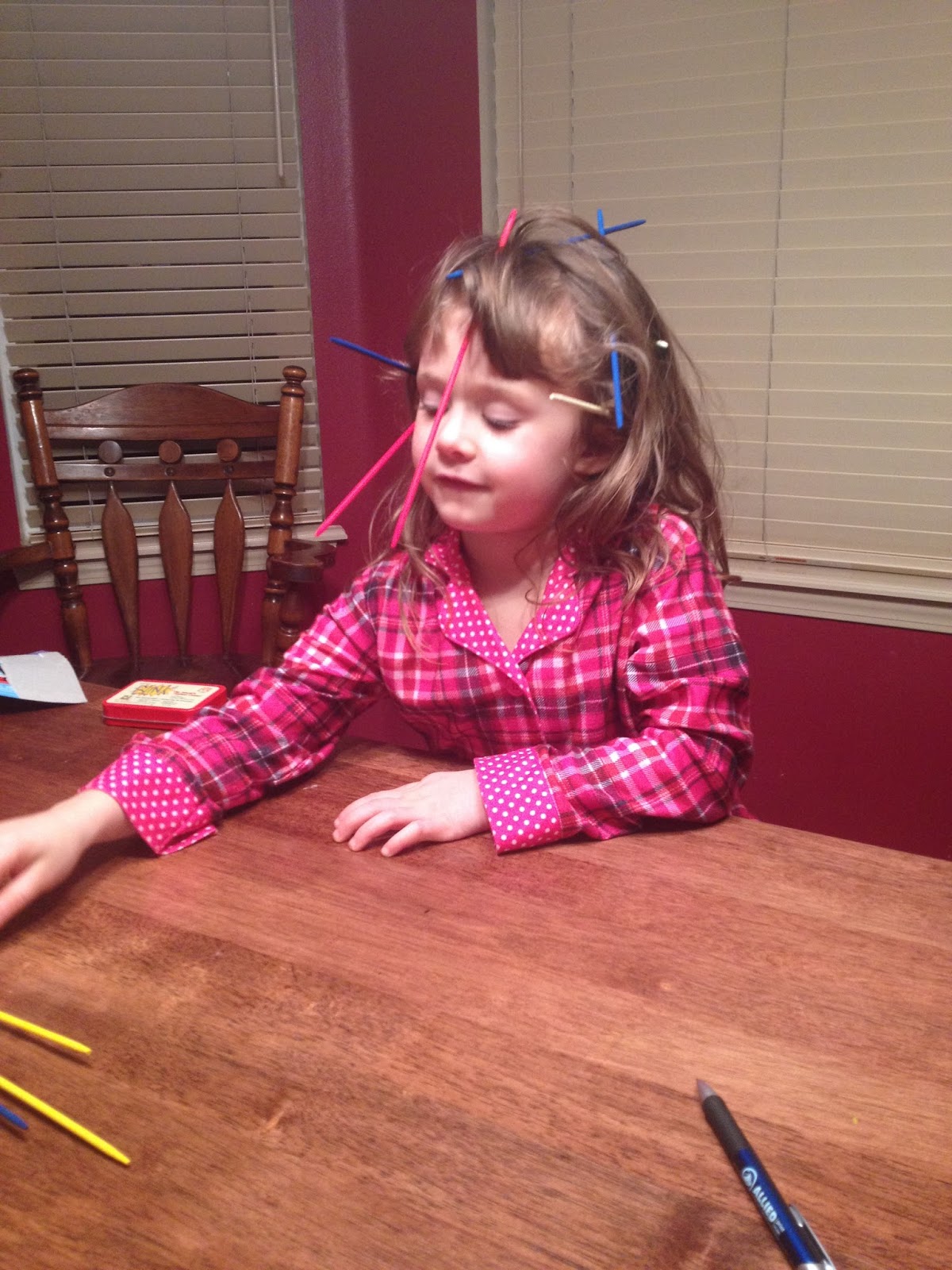 My parents showed up so we could shauffer them to the airport.
It was fun to have them even if it was for just a tiny bit.
Gage colored himself to sleep. 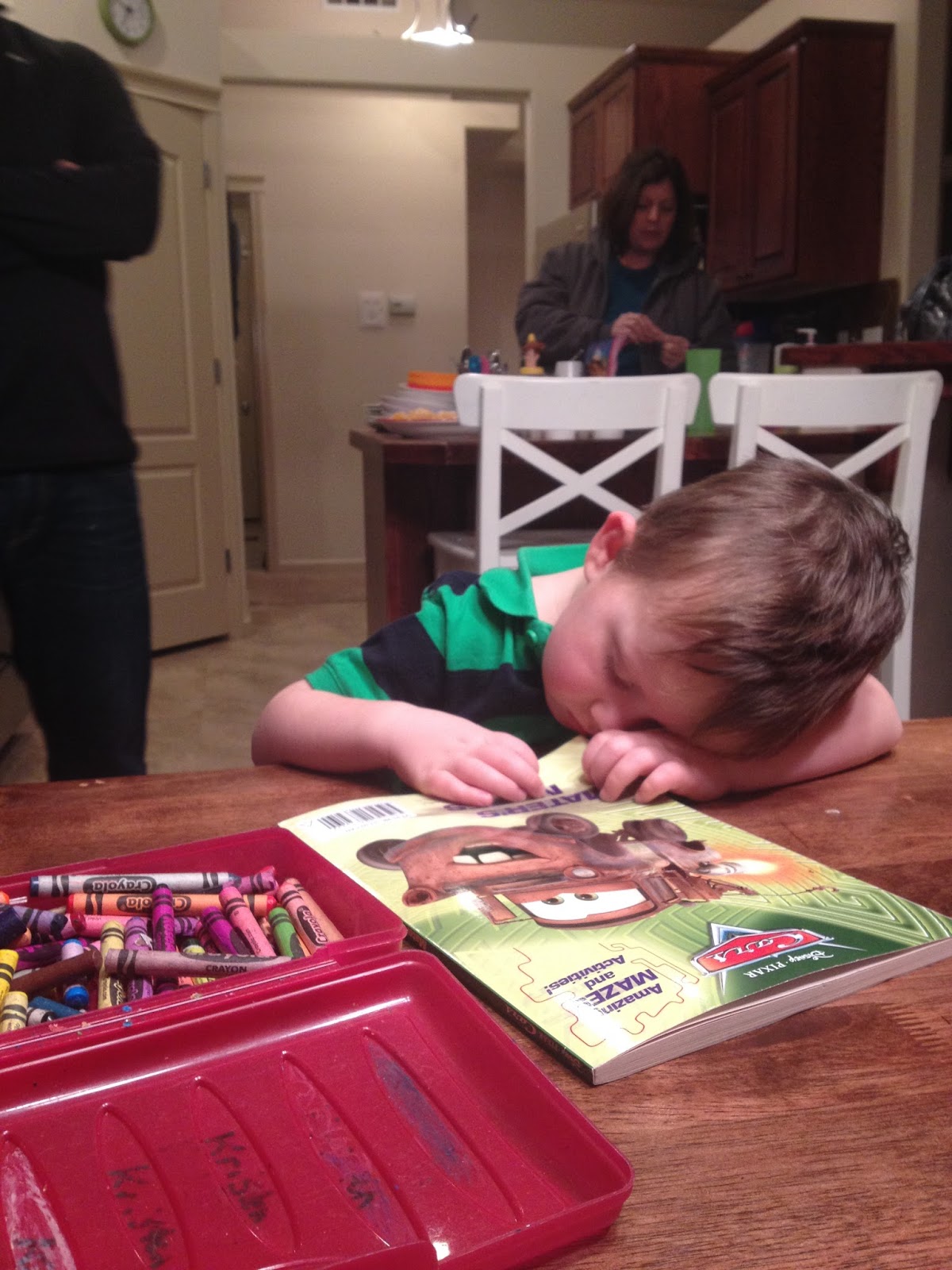