Naomi doesn't have many burdens in her charmed little 1 year old life.
I've often stare at her in envy at how utterly carefree her life is. She doesn't even know fear, as evident when she will just throw herself out of our arms like she can fly or dive head first down the biggest slide at the park laughing the whole way, or try to walk off the end of a bed. Yes in Naomi's life the world is made of fluffy clouds, where fear doesn't exist, needs are met instantly, and everything is edible or at least tastible. Yes life is practically perfect in everyway, BURDEN free, EXCEPT for one culprit: (que bad guy music)
DUN
DUN
DUN
The PUMMELER: 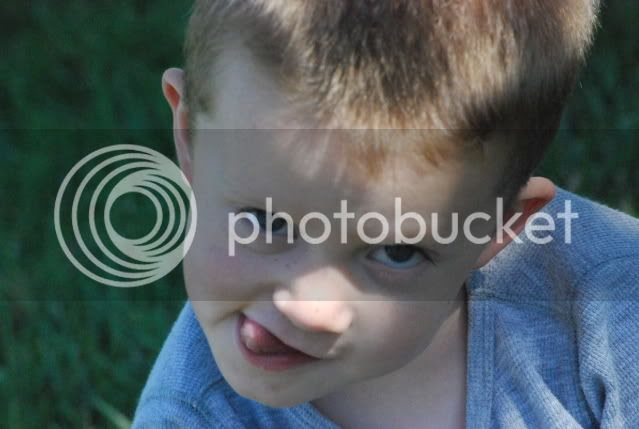 But I guess Nay was listening better than I thought during General Confernce when we were counciled to not just bear our burdens here in this life but to smile and Bear Our Burdens Well.
I actually took this video before conference, so not totally a true story, but this really use to be a scene of screaming and crying then, time outs for Cache... He just can't help it! I truly believe it. Sometimes he will just even sit himself in time out, shakin his head, like "I'm hopeless." He just HAS to tackle her. It's innate in him or something. So I'm so glad she learned to love it! It really was her only choice.


AND sssssppeaking of someone who Bears her burdens well. Did any of you see Nie Nie on Oprah today? It was, well simply AWESOME. Here, is a link to some of it. (not a huge oprah fan, but this was cool)
Posted by Amie Orton at 8:28 PM

Yesssssssss! I'm a NieNie fan, not an Oprah fan, but had to tape the show to watch today. I love her blog. Anyway, I spent the entire segment trying not to cry =)

And as always, your kids are adorable!

That video is so cute! I love it when they learn to play together. It is so fun to watch Porter play with the girls.

Thank you so much for inviting me over to watch NieNie with you. I am so amazed my her. And thanks for the good chat!

Naomi is so chubby compared to Savvys. How do you do that? I love this footage! Classic! And Cache is handsome. I so so so so so so so so so wish I could come over and play with them. I guess the girls could come too :)
Nie Nie on Opah was inspiring. And I didn't fight the tears, I cried, mostly when she walked out and you could see how strong and happy she is now.
Miss you guys crazy!

And hey, I was just thinking... you need to put a picture of Devin on here. Doesn't he have like a white coat or something for his clinics? We want to see him all chiropracticed-up. And more pictures of you too Amie!

sheesh Cindy sue, nothing i do is ever good enough for you. :) I do need to post a pic of Devin in his get up don't i? If I ever see him, I will try take one! well consider it done.

Oh my goodness! That is so cute. I love how well they play together.

wow amie, they are so cute! i can't believe how big cache is! and of course naomi who i've never even seen!! you have such a cute happy little family! i miss you! but i can tell you guys are loving it over there :) lets talk soon!

Wow Cache is such a monster! A cute monster though! My little Danny will always look up to him and follow him around just like Trent used to follow Ben around! Ha ha!

That video looks like the scenes going on in our house too! It must be a boy thing to have to tackle or knock down your little sister. Cute kids!

haha, awesome! I love how rollie pollie they get at that age. just rollin' around like a panda bear. so cute. glad to see you guys are doing well. Ditto on the fact that fall is simply the best time of the year. THere is nothing....NOTHING like a nice cool morning and sunny, warm, crisp fall afternoon to strengthen the spirit and enliven the soul... (especially if BYU wins :D) we miss you guys. take care.