Like many people I work best under pressure. The last two weeks, I have been up to a lot of last minute projects I want to get done before I add another person's life to my list of responsibilities for the next 100 years(Is that a nice way of saying have a baby?) First off, I decided to try and potty train. I had Cache throw away his own diapers and took him to pick out new "Undies." We have used a lot of carpet cleaner/ and lysol, oh and laundry detergent in the last 3 days, but he seems pretty happy with himself and I pay him a penny for his piggy bank every time he goes... He made it through 2 nights successfully.. Yes we are going cold turkey. Remember I have a September 17th deadline. We did fruit snacks as an incentive, but Cache would rather have money. He sleeps with that piggy bank. Although this has caused a bit of contention from me towards Devin: "Devin! NO quarters! You gave him a quarter? I NEED my quarters,, give him pennies he doesn't know the difference!" Once Cache has the money, it is HIS,, no one touches his money. I still am bitter about my quarter. In fact I glared at his piggy bank today.

Anyway so potty training and the same day painted Cache's room, Cleaned out our two huge closets to sort and send loads to good will. Tomorrow I'll hopefully paint the baby's room.(pictures of rooms later.)

I made my first quilt of my life. I borrowed my neighbors sewing machine and I still am not sure if I'm a quilter or not.. I just had a hard time with patience and it only took me 2 days. I hear these are easy quilts.. Lets' just say if you ever receive a quilt from Amie she must really really love you, and if you don't, it doesn't mean anything either, because I just may never make another. But I am happy with it, and it was for a special little girl: Amelie, who I babysat for quite awhile. I finished it the day before her 1st birthday party. My attempt at an artistic picture below. 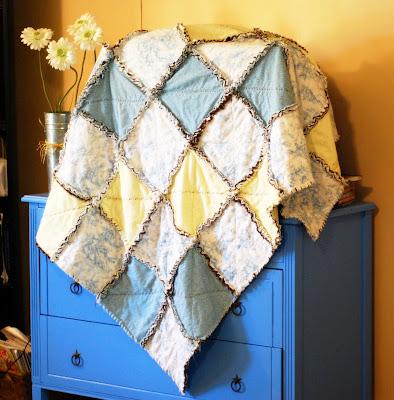 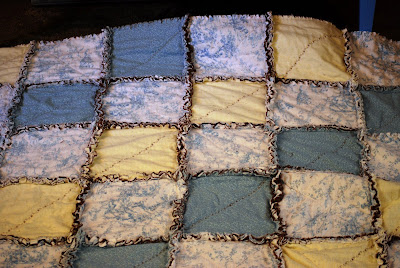 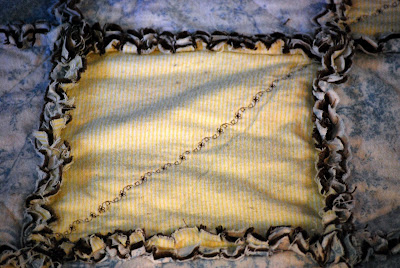 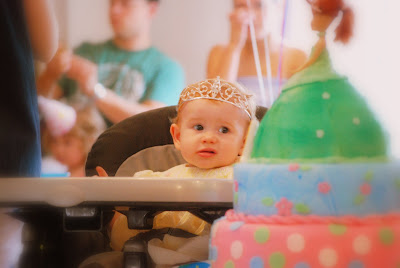 I posted this picture for Sarah...Look at her cake Sarah! All of fondant,, talk about the ultimate barbie birthday cake!

We also threw April a baby shower.. April is a good friend of mine who was actually the relief society president in my ward at BYU, so yes came to the hospital when Cache was born, and even though I was on drugs, she was one of the only visitors I clearly remember because she LOVED the named Cache and I LOVED her for it,, everyone else gave me weird looks.. and it was growing old. Now we are both having our babies together here in Missouri! And actually due at the exact same time... how fun. So now that you know April..here are pictures of her shower, I helped our good friends Ashley and Sandy throw it for April (Ashley is also due any day now). All of our husbands go to Logan,, it was a fun time! We did a chocolate fountain and it was held in the most beautiful house in Chesterfield, Oh I am especially proud of my watermelon carriage even though I copied it from a friend(and added my own touches like the handle and scalloped edges)! Oh April is the one with curly hair like me..Ashley is the blondie, and Sandy is the non pregnant chica.. 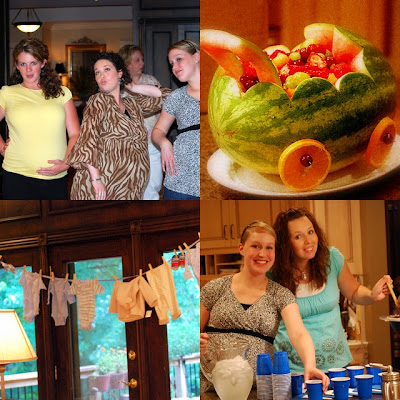 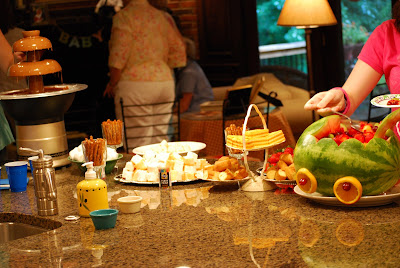 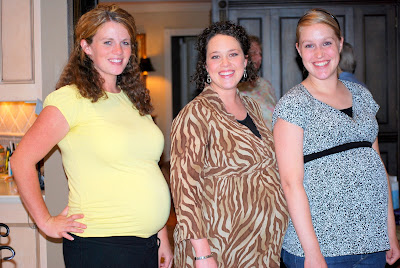 The 3 buns in the oven..GIRL- BOY- GIRL
respectively. Yes this is such a bragging post, but I have to Brag while I have something to brag about and then settle back into "my greatest accomplishment is mopping the floor or taking a shower" comfort zone. Thanks for listening to me!
Posted by Amie Orton at 2:04 PM

You deserve to brag! You've accomplished way more in the last few days than I have in a whole month, I think. And you already have a child! The quilt looks fabulous, by the way.

Wow! I LOVE that quilt. Super good job Amie. And I LOVE the fruit carriage. Great idea! Good luck with the potty training. That is awesome that Cache likes his pennies. Why didn't I think of that? Claire ate so much candy during the 2 training weeks. But now she doesn't need a reward everytime, so it's less and less sugar. Maybe I will try the penny thing too, if I need to. PS: I also LOVE your blue dresser. Did you paint that? What is the color name?

loved hearing about all you have done. I think i need to take a nap on your behalf. Love the cute quilt...is that a cute stitch you have on your machine? it is so cute.

WOW Chickadee.....You have been busy! Those quilts are hard, I am amazed that you got it done in two days! it looks fabulous! And congrats on the potty training. Good job Cache

Oh Amie your soooo incredibly awesome! I just love having you as a friend and I know your an amazing wife and mother. I want to be like you so much. Your blog is a lot of fun to read so thanks for posting and also you did such a great job with the shower thanks for the help.

cute, cute and cute! Good job getting all of those things done, the quilt is super cute. Congrats on Cache getting potty trained. That will be nice to have only one in diapers instead of two! You look great still, only a few more weeks, eek!!! I'm so excited!