I am just going to spend the next month back tracking.  I have a big gaping hole from about Summer to Fall. And heaven forbid I not document every picture I take! ha.  Anyway. During that time we got ready for Tahiti, went to Tahiti, as well as family reunions and then we moved to a new house, new school, new ward, and such. So gotta catch up those pictures. 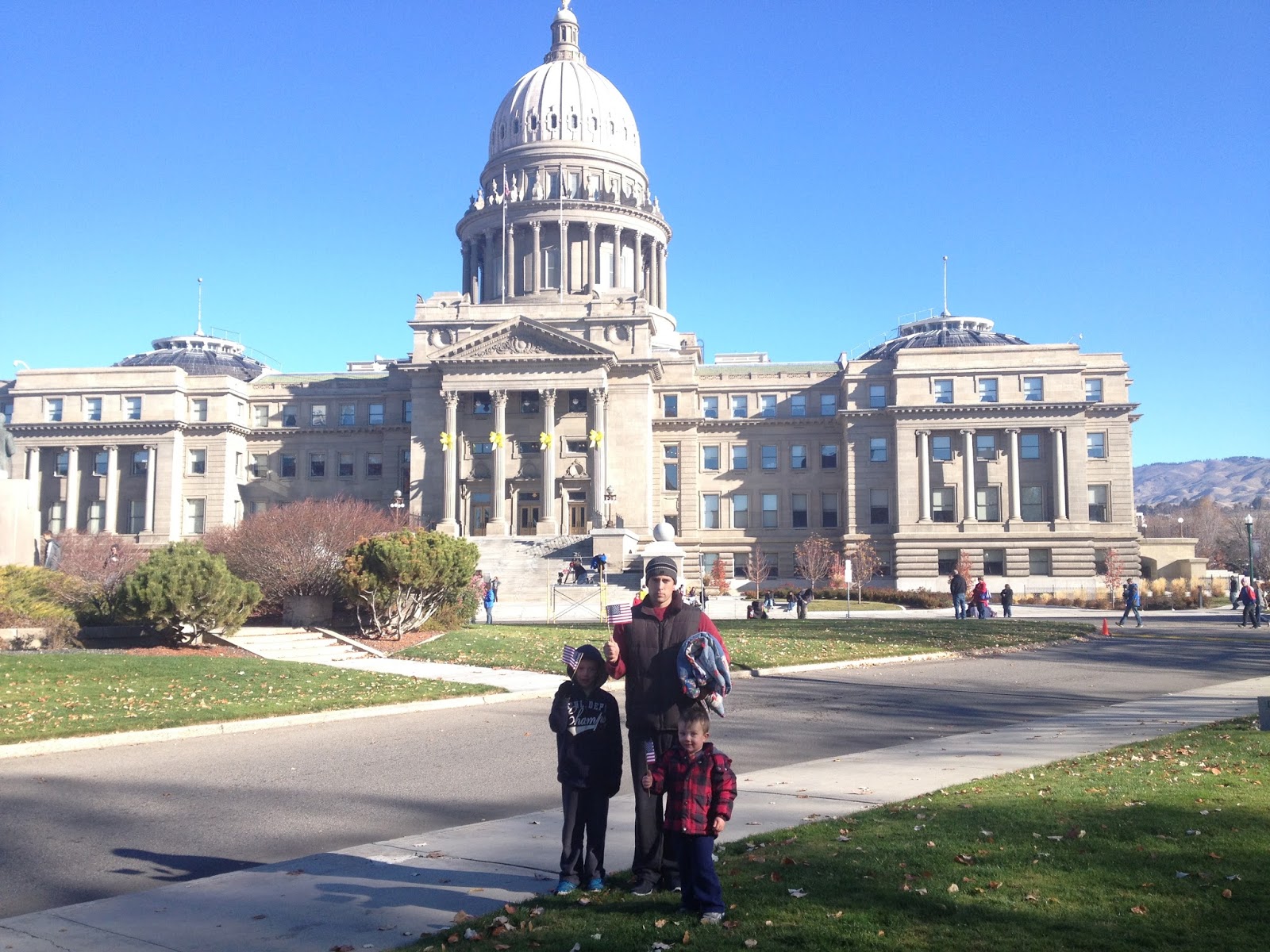 We took the family down town to watch the Veteran's day Parade. Lots of tanks, hummers, even a few planes on wheels,  and of course lots of American flags and Veterans. I was really impressed how all the soldiers, veteran's or anyone in the parade would come and shake the hands of every veteran in the crowd, and say: "Thank you." 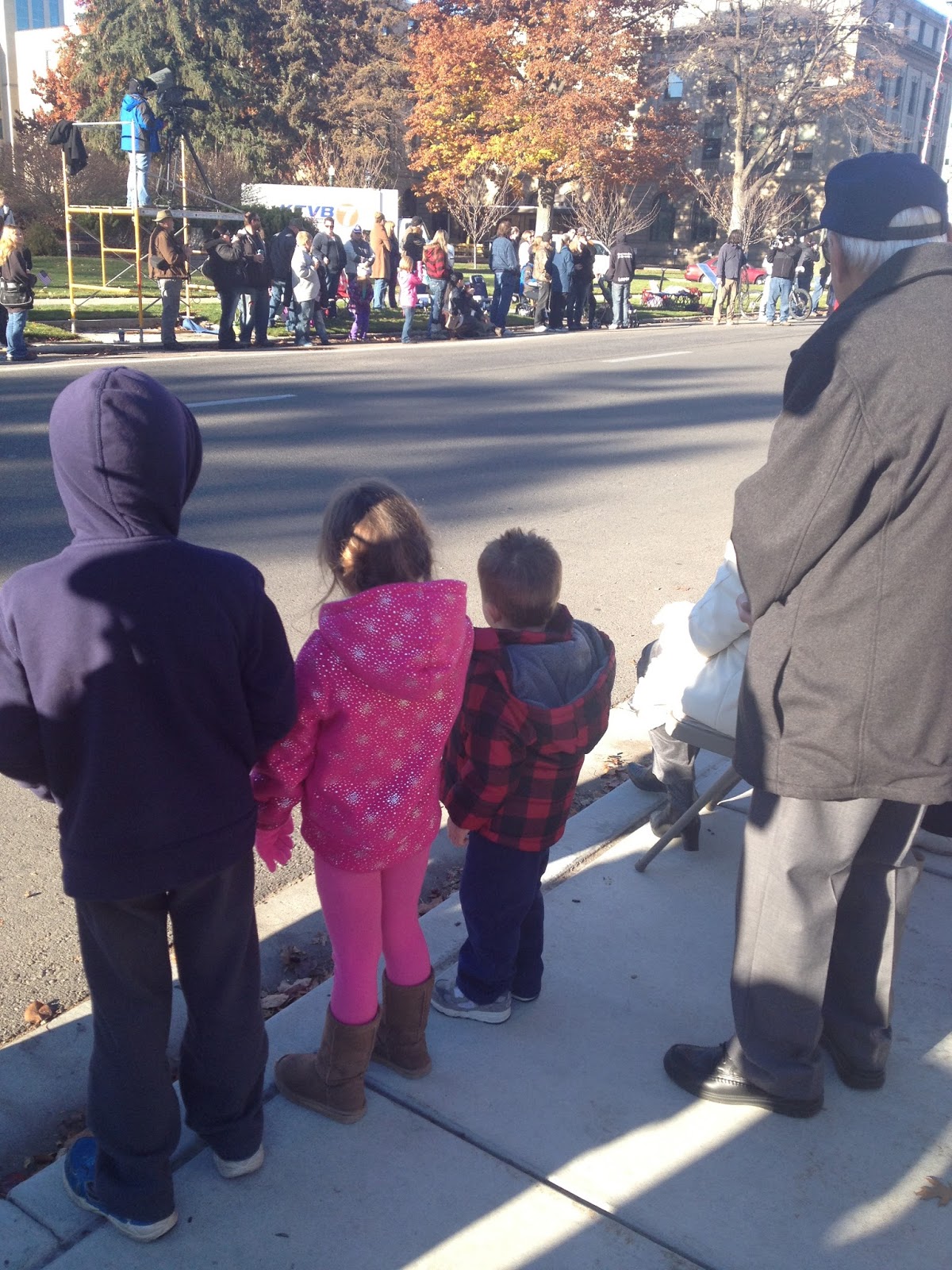 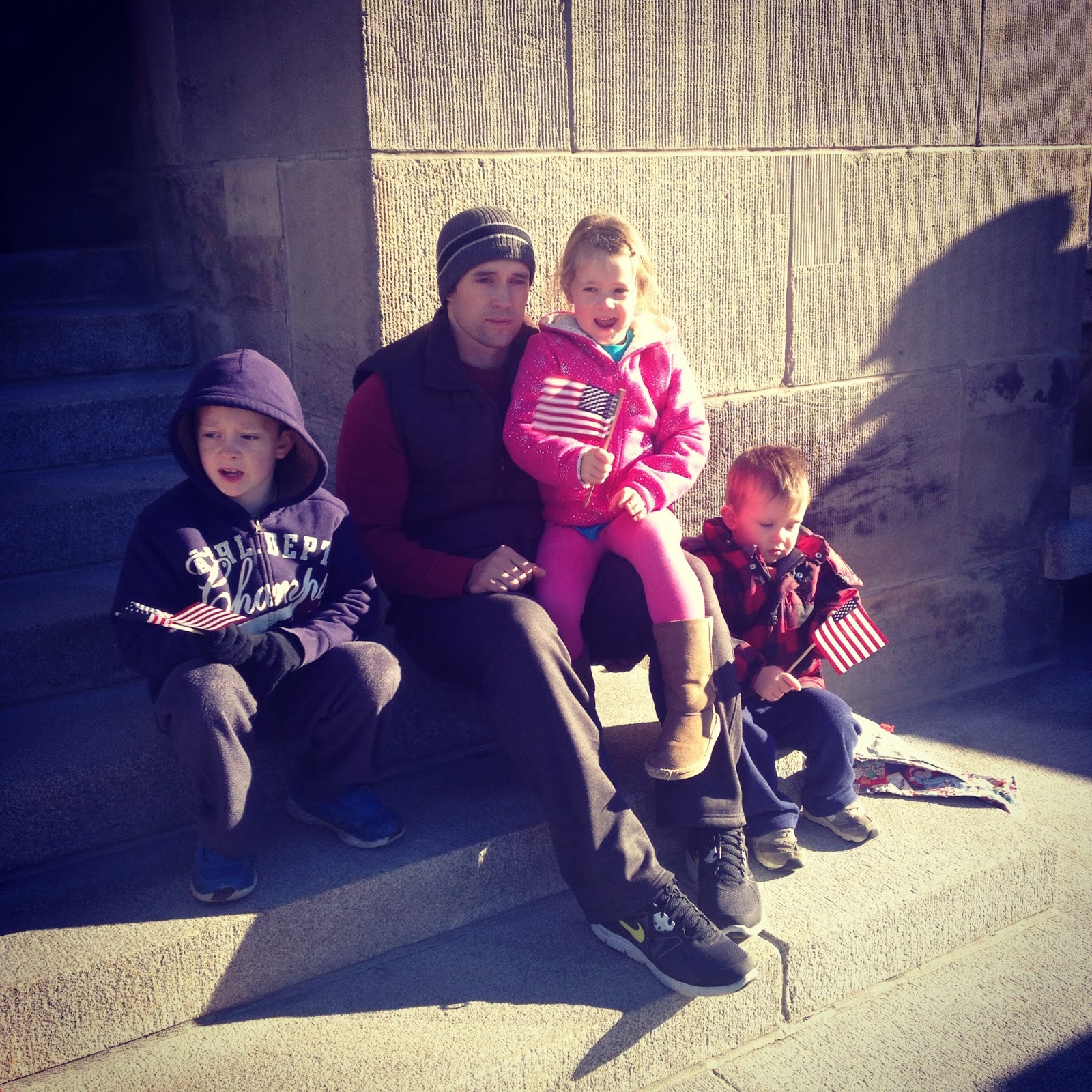 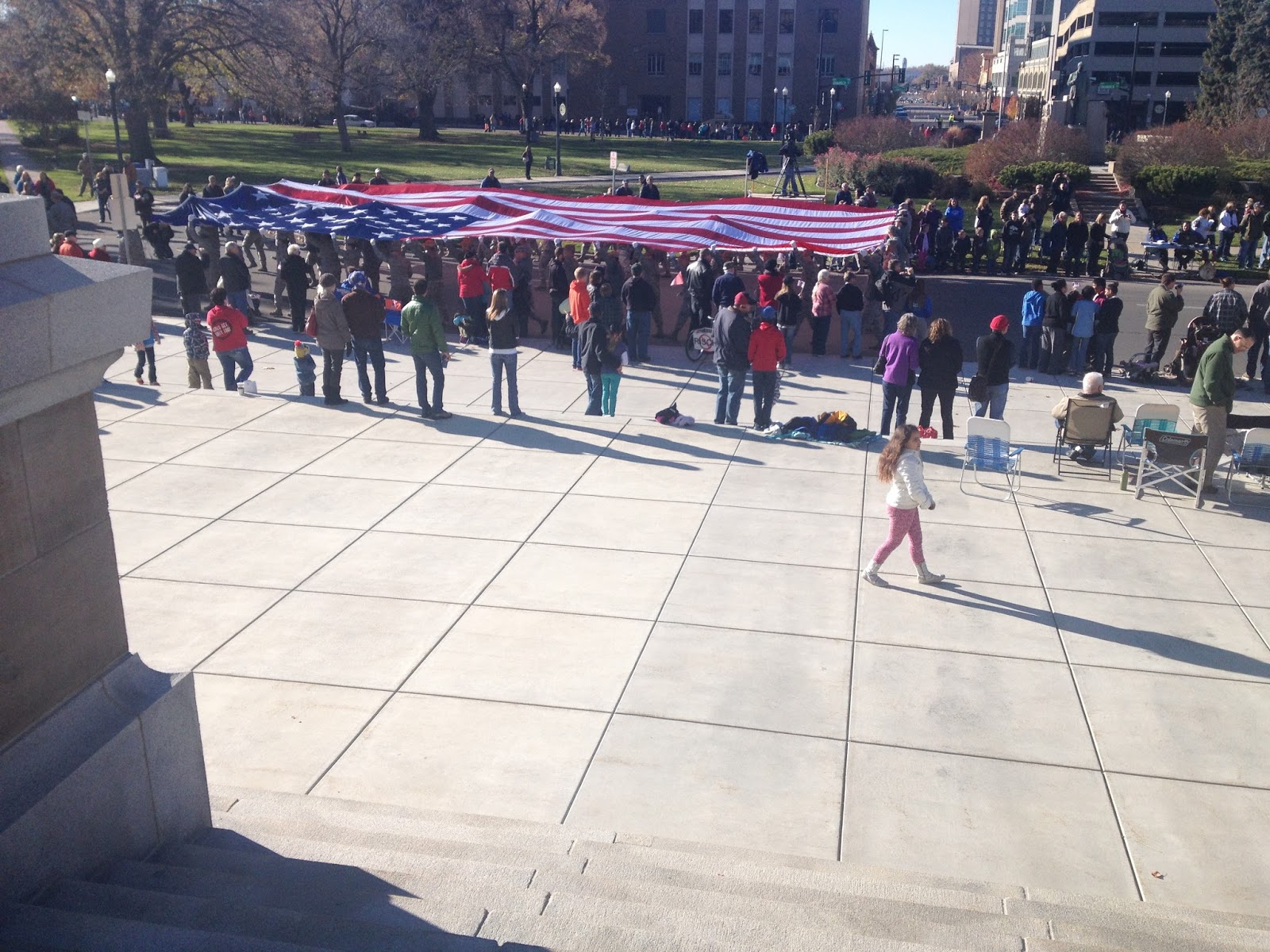 Here is Gage the grandpa magnet. (Below)
They came out of the parade and be-lined it straight for little Gage sitting on the curb to say hi.  Gage  would wave his little flag but no matter what they did or said he would not break this expression: 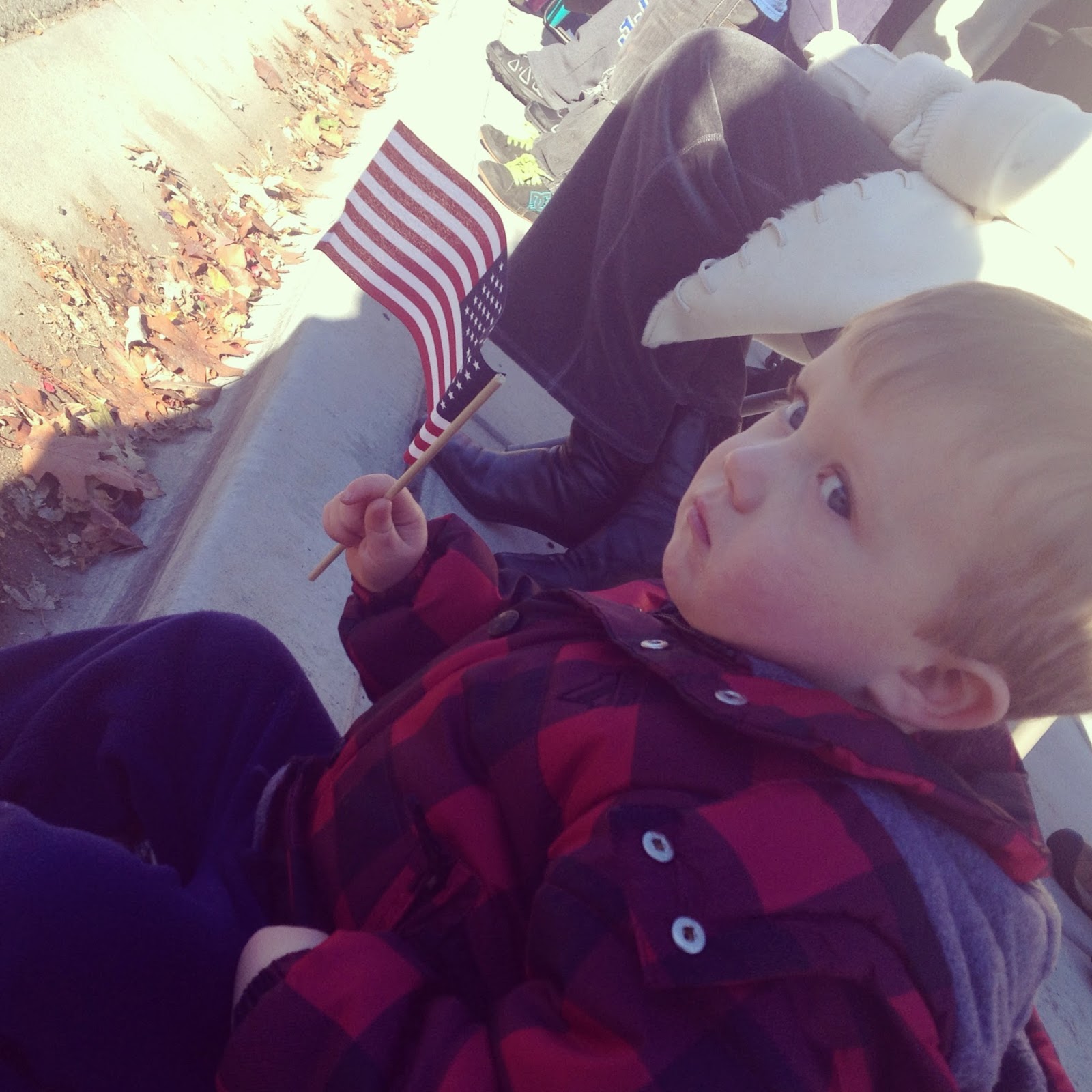 The Veteran sitting next to us, looked exactly like the old man from "UP." Gage watched a lot of the parade just standing next to him holding onto his leg. Super cute, and totally typical of Gage.
It is very common for me to be in any store, the Apple store, the toy store, the clothing store, and turn around and Gage has recruited some Grandpa to help him get a toy down, get on a chair, play catch with him.  I've noticed that they are usually always a wrangler wearing, grandfather aged man, just like his real grandpa's.  Anyway, so the parade just furthered my observation of this funny phenomenon.
Moving on.
After the parade we walked down town to "The Pie Hole." Got us some pizza. Funky place. 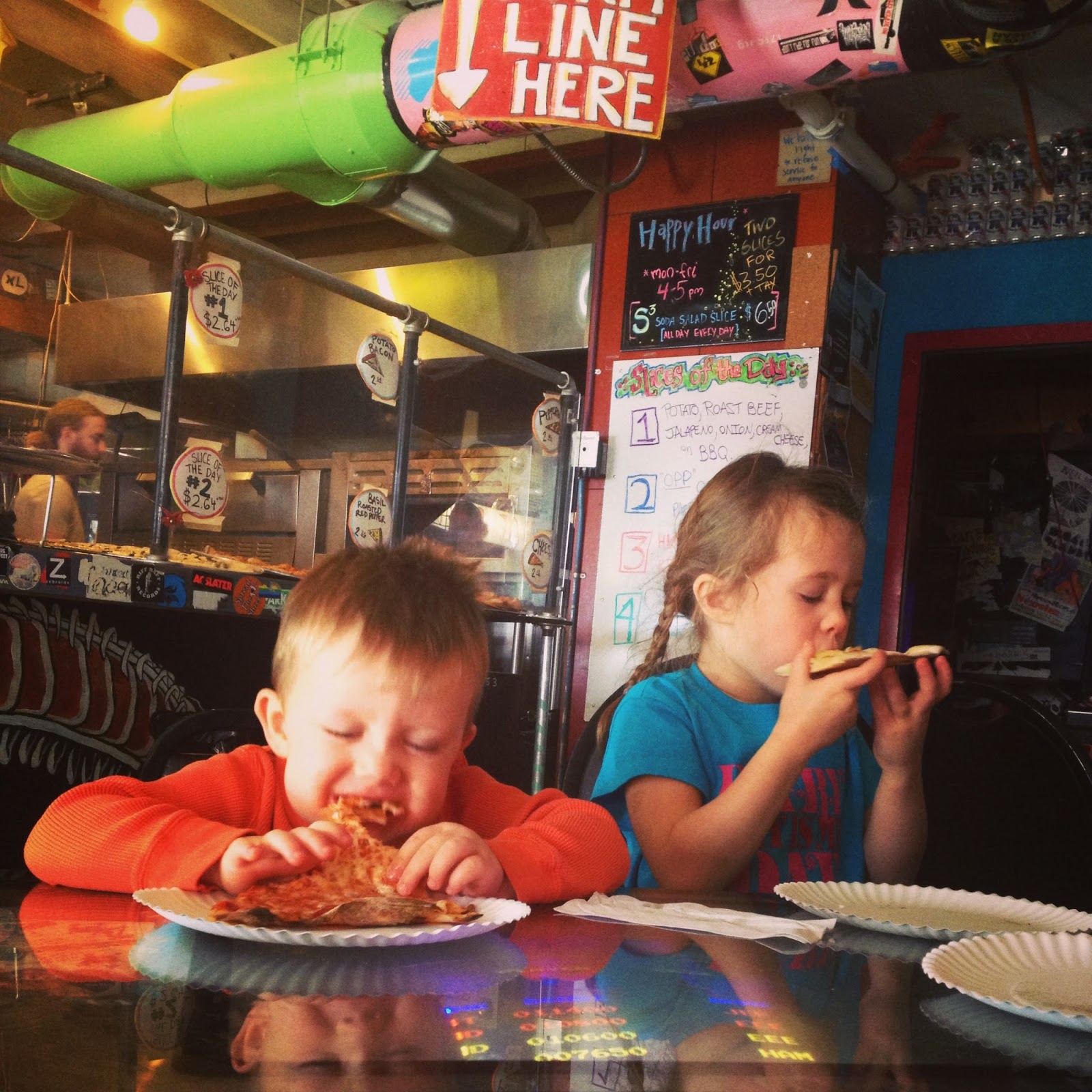 The week before Veteran's day, Cache's class along with all the other 2nd graders in his school put on the most touching Veteran's day program. It was really special and I was so glad Cache was in this school that taught him such amazing patriotic songs about how wonderful our country is. I can't explain it in words what a special night it was. A lot of the audience in tears! And lots of parents, grandparents and on, dressed in either uniform or in veteran's hat. I just loved it. 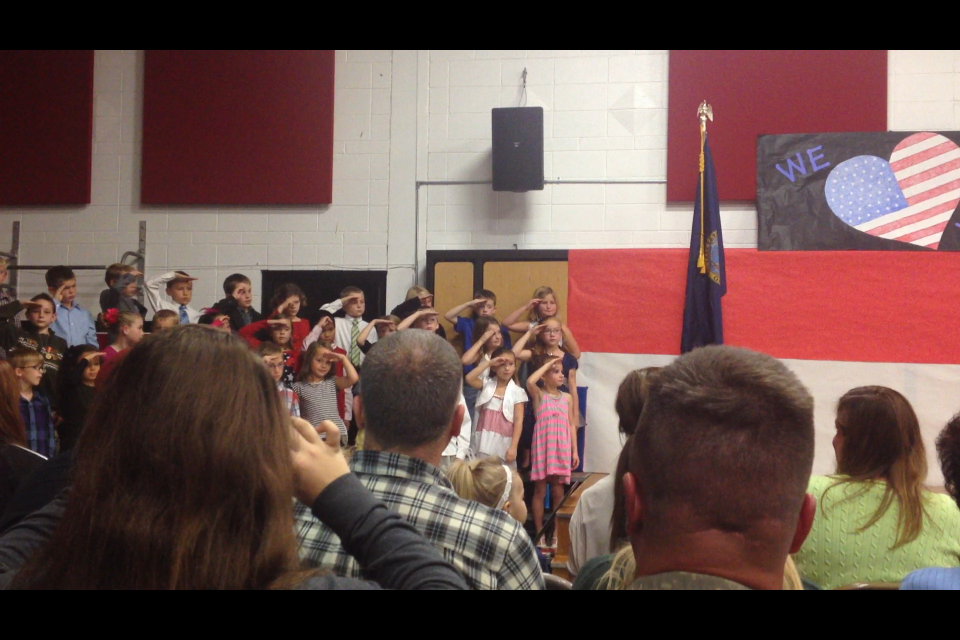 Little Lou,
HI :) I emailed you back at Christmas about hanging out and I didn't hear back. I am so glad you still want to be my friend!!! So, here is my email: the same one I have had since email came out... the kri_66 one you have it right? Email me and then I will give you my digits and we can have a little chat. Trust me we need to talk. We will be discussing: where you moved to and if you want us to move in next door? It might be a year or so but you probably should just call me! Together we are going to be watching dandelions blow in the wind in the great state of Idaho!