It's just one continuous party around here... 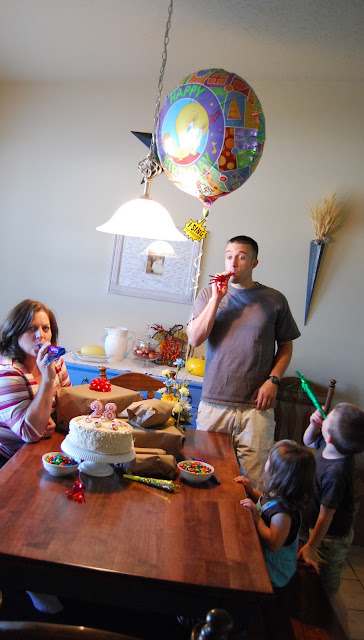 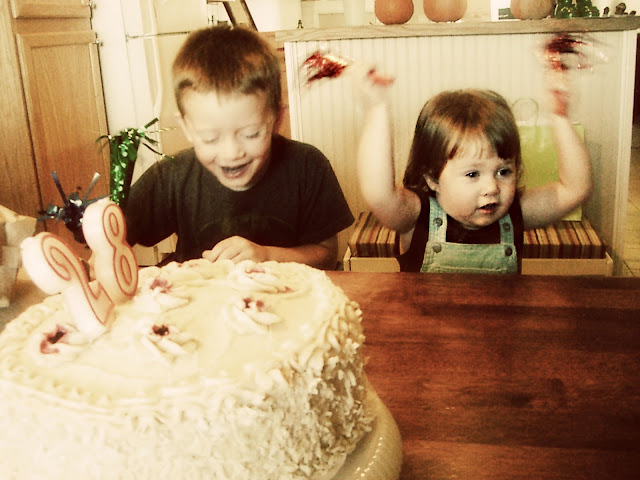 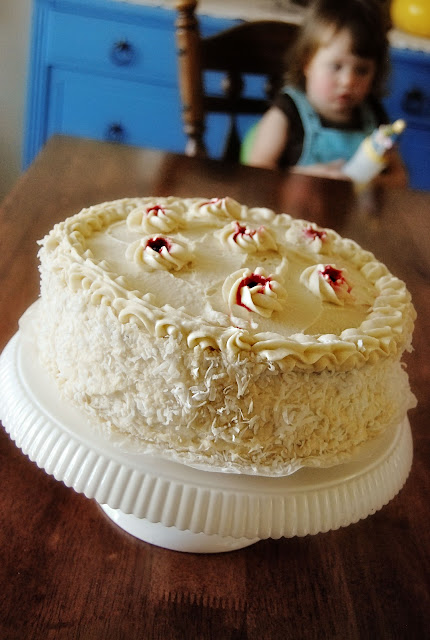 It was a really good day.
Baby Gage and I slept in till 10:30. (If you don't count getting up at 2:30, 5:00 and 8:30)
Gage also turned ONE week old on my birthday.
My mom showed up after lunch with Cache and Nay who had been playing in Oregon for almost a week.
Oh we missed them.
We decided to ORDER in salads from Cafe rio AND cheesecake factory.
That way I could taste salads from both my favorite places.
yummm.
We were so glad that we ordered IN instead of going out.
During dinner the baby demanded feeding, Nay needed changing,
and fell off the bench.
Food was everywhere, (Naomi and me).
It was a circus.
But who wants a boring party?
Devin is a good party thrower.
He is the sweetest man.
and goofiest.
Several hours later after everyone was finally finished eating
I got to open gifts that Devin and I went shopping for the night before.
All alone. (all alone plus baby)  We stayed out till the stores closed, just roaming, trying on
weird clothes texting pictures of them to Ben and Sarah and picking out new red kitchen knives and new red tupperware.
My first real tupperware that didn't use to live as a yogurt container or that someone
left at our house! ha.
Shopping that night reminded me of the first 3 years of our marriage... just me, Devin
and Cache.  We took him everywhere from his earliest days.
Those were some sweet days.
We never were home for bedtime.
it was our first one and we were 22... we didn't know babies had bedtimes.
Cache was always happy as a jay lark.
He never got cranky now matter how late it was.
Now we are always home by 7 or before or we are asking for trouble.
** A girl from Devin's work made my birthday cake. **
I loooved it! I've never even met her.
Isn't it perty?

Now we are getting ready for Haalooweeeen then Cache's b-day and Devin's birthday,
6yr anniversary and Holidays just get more exciting from there...

I might get depressed after New years is over.
Or hopefully by then I'll be all partied out.
Posted by Amie Orton at 1:51 PM

Happy birthday! Glad it was good. How are things going for Devin anyway? Is he working in that gym or did something else work out for you guys. And your cake was beautiful.

Happy Birthday Amie, how fun for it to be a golden birthday...mine was many moons ago of being 29 on the 29th. love the photos it makes me feel as though I was there.

Wow, that cake looks yummy :) And I want to know... did you get the cock monkey pjs? You looked so cute in them, haha. Happy Birthday Amie. You are one of the most kind, happy, content people I know. And your blog is probably my favorite I look at. So you deserve a really special bday! I love you Amie Lou!

Happy Birthday!! Sounds like you had a stellar day. Your family is super cute.
P.S. I need your email address so that I can invite you to our blog(email it to kmerr26@gmail.com).

Yay! I was so excited you posted about your Birthday! What a fun day. I see you got a white cake stand like you've been wanting. It's so cuuuute!