Tonight while making dinner, things just kept getting crankier and crankier, Until they just spiraled unusually OUT OF CONTROL. Ciaos. On and on, both kids were SCREAMING,(a step above crying) throwing themselves and other things on the floor, hitting, then kicking, one thing after another. I was yelling over all noise. "STOP! What? HOw? Cache if there is no blood No Screaming!" Meanwhile, stuff is burning, phones are ringing, timers going off. I just kept getting tenser and tenser, my eyes wider and wider, my jaw tighter and tighter. Looking at Devin, he saw that I was on the verge of physically exploding, So he paused.. assessed the situation,
and THEN he did what anyone would do
AND
.
.
.
.
.
.
.

He Stuck the cooked squash on his HEAD.

That was the most logical thing to do right? We actually all stood in shock for a full 10 seconds before no one could resist. Like magic, the rest of the evening was very pleasant from that moment on. So I'de like to leave you all with a word:

When the going gets tuff... 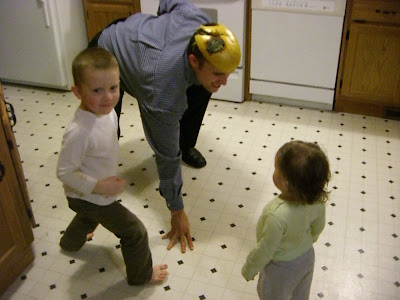 There isn't much a spaghetti squash on the head,

(That is still warm and squishy) 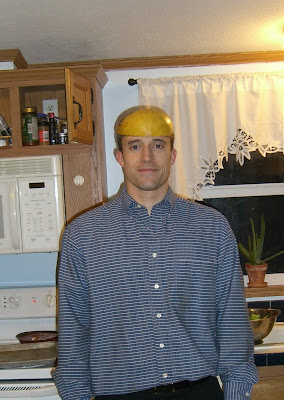 :)
*picture taken after he had eaten all the strings hanging down on his face.

Coulda used a squash head at our house tonight. It was one of those nights at our house too. It got better when Ben said the prayer and asked that we would all just be happy the rest of the night. And wallah, Claire was asleep by 7:00 pm and we got one on one time with Savvy.

That is awesome! A good man who sacrifices himself for his family!

Husbands/dads are the best for times like these-I can totally see my guy doing something like this in the heat of the moment...and it saves us. They save us. Thankfully.

You look so amazing by the way. That picture of you and your sister is gorgeous and you are miss tiny mama! How do you do it?! (:

Loved all the Christmas pics too-looks like you guys had an awesome time. Glad you were able to spend it with both families.

I loooooooove you two.

Thanks for that, it made me smile. We all need to laugh a little more. Devin you are great!

Devin, you are great. Mr. "no contention." I hate contention too! Goofiness can overcome a lot of challenges in this life.

Amie, goodness me!! I am impressed by your photos! haha. Id love to tell you all about the eyes. Its easy but kind of a wordy process.
so email me at jennifersclater@hotmail.com
& Ill respond in full detail! Thanks for the drop by amie!
ps: looking at your sweet life made me smile!

Oh, Amie... Cannon and I thought we would jaunt on over to your blog, and I can't stop laughing! First with your awesome poetic description of a very familiar evening, and then the remidy... Words can't express it, huh? Spaghetti squash. And just yesterday I smelled from dowstairs that I was overcooking mine! :) Only somehow, I cannot see my husband placing it on his hair. Only Devin. :) Oh, We miss you guys!
-Mary

Very cute Devin...but why do the daddy's get to be the good guys.
Cali wakes up and wants popcorn, she walks off and says MOmmy is mean..
I want to be the hero..;-)

Thanks for saying hi on my blog. I can tell with one look that I will love looking at your too! If you dont mind.

Your family is too cute!

p.s. The dinner thing sound awfully familiar to many of my nights! Glad Im not alone! :)

Devin's a catch; a man that can handle "home stress" that well is something else. Hilarious!

That is awesome, I love how husbands are able to calm us down at our craziest moment. Love the hat...hey did you get a new phone number I have been trying to get a hold of you. If you get a chance want to give me a call..