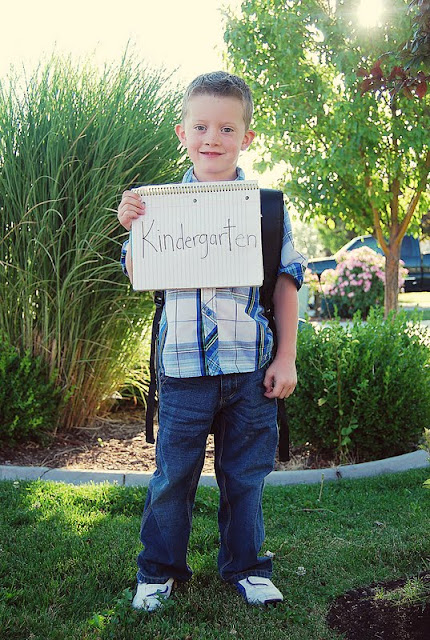 aaaah!
You know what?
It was fun.
And it was special.
I wasn't sad.
I kinda wondered if I was heartless or cold.
But I definately wasn't wanting to get rid of him.
Infact I wouldn't mind waiting another year.
Of any child
Cache is never the one I need a break from!


But he was so ready.
So excited.
I didn't even have to hold back tears.
It was hard for Devin and I both
to not follow him in and
see his desk and
see what he would do
and enjoy every moment with him.
But Parents had to say good bye at the door. 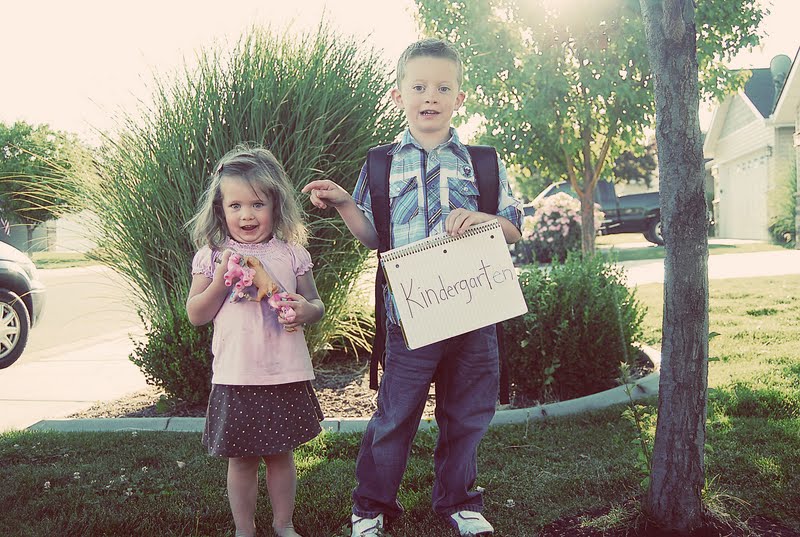 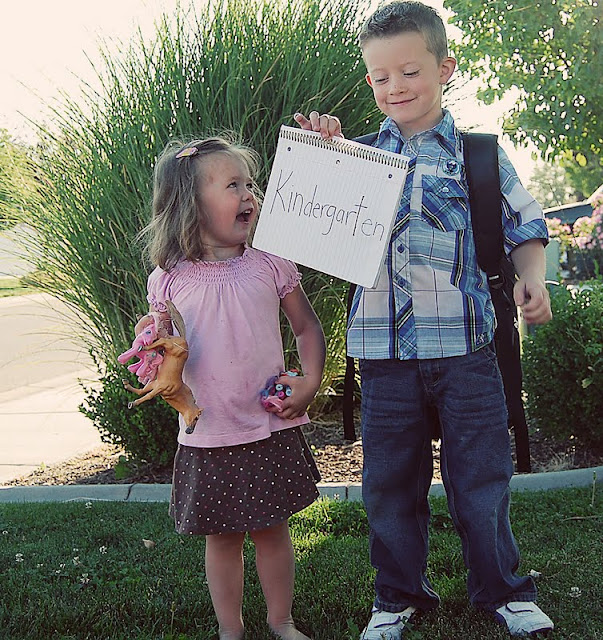 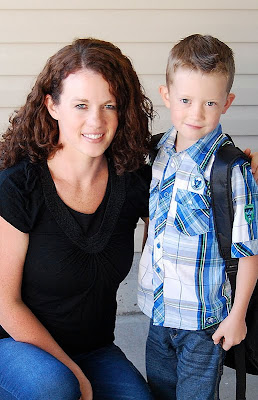 Wayne and Janie surprised us and stayed with us the night before. Making the first day of school even MORE exciting for Cache.
But it also made it possible for Devin and I to take our first born, the one that's been with us in spirit from basically the first day of marriage.  The one who has experienced every home, almost every first Devin and I have had together. The one that has been  at our knees, in our arms, in our hearts, since we were 22 years of age. Yes our first born taking his first steps into independence. Into the world.  Without us!
I'm not sentimental or anything. 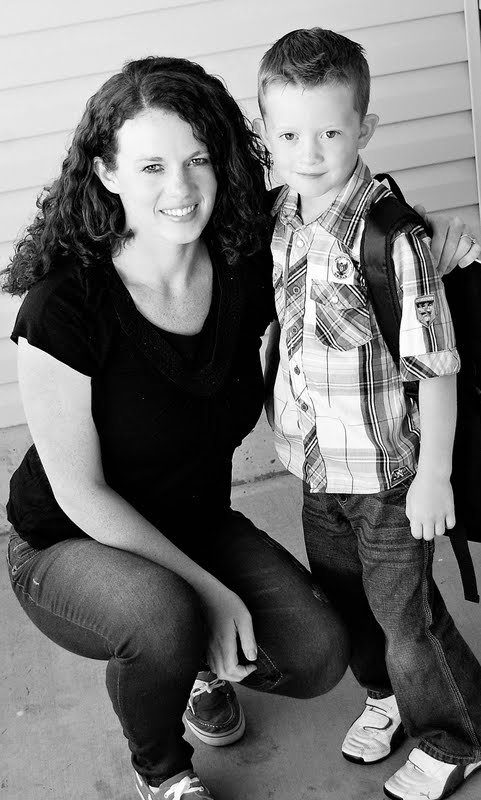 Cache picked out his back pack.  At first his only stipulation was that it needed to have a special ipod pocket and a big skull on it.  After much convincing him that he couldn't bring ipods to school, and that I  don't want my kindergarten dressed in skulls, he picked a soccer bag that has a special pop out pocket that can fit a soccer ball. 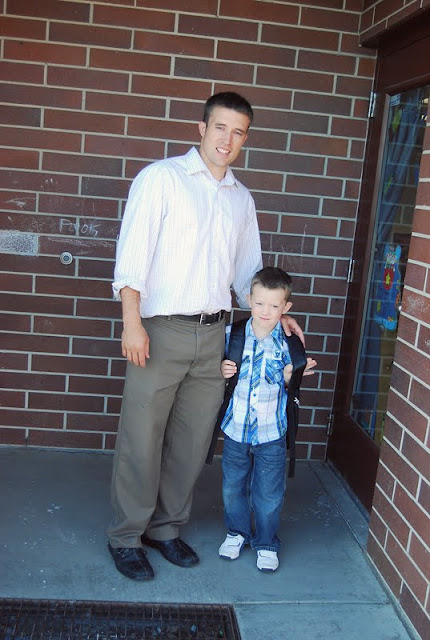 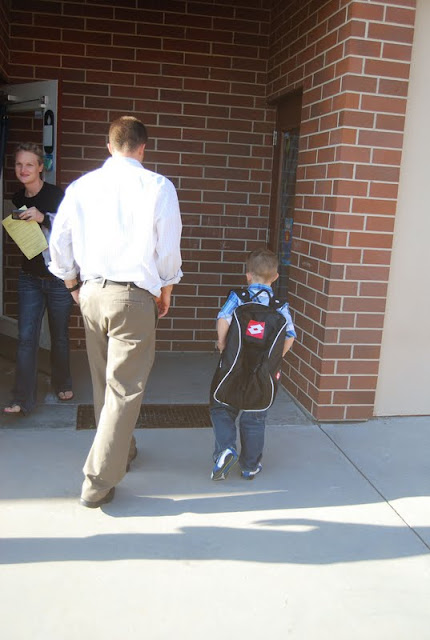 As we drove away. I thought about him being born. I didn't cry either on that day like many mothers do. And I thought I would/should.   It was very much the same feeling. Special. Good. Calm. Happy.
In both situations I was tempted to try to cry, because maybe I was suppressing these feelings I was suppose to have?  But I thought that was silly.
So I moved on. 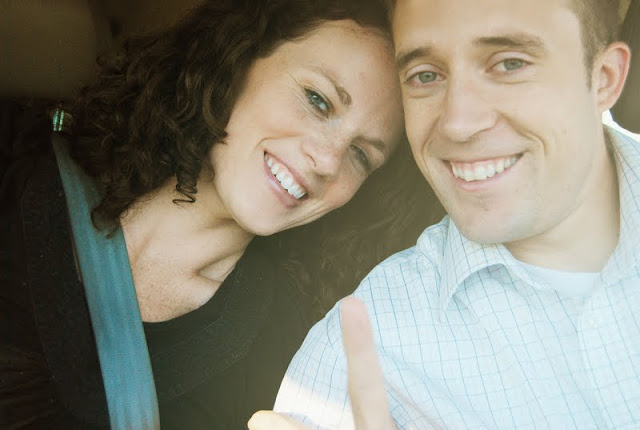 Devin and I after dropping him off.
Devin always finds excuses  #1 in pictures.
Like weddings, anniversary,birth of our children(even if it's our 3rd child..)
This time he said it was for dropping off our first #1 child at school. 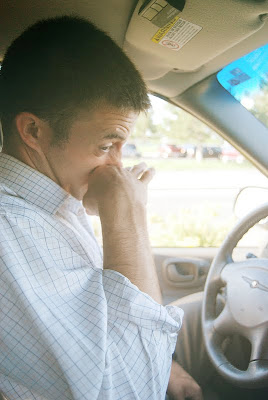 In this family we leave the sentimental crying to the dads.
Devin's so snotty when he cries. :)
Nay and I spent the morning preparing for his special back to school supper and picnic lunch.
And before we knew it, the time came to pick him up! 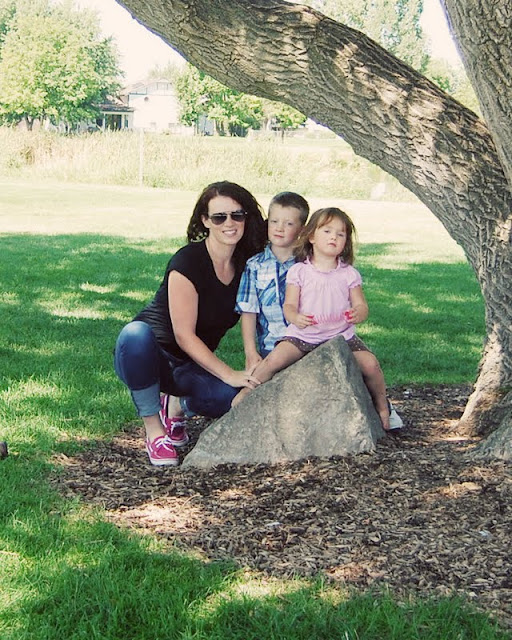 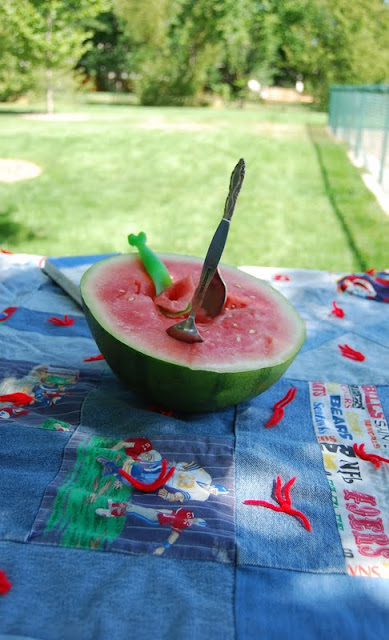 Cache had me take pictures of him in this tree.
All his original poses. 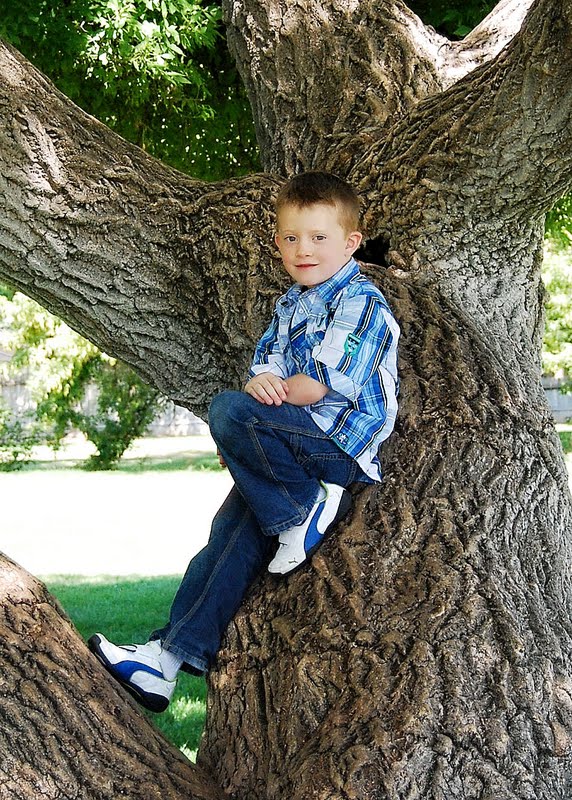 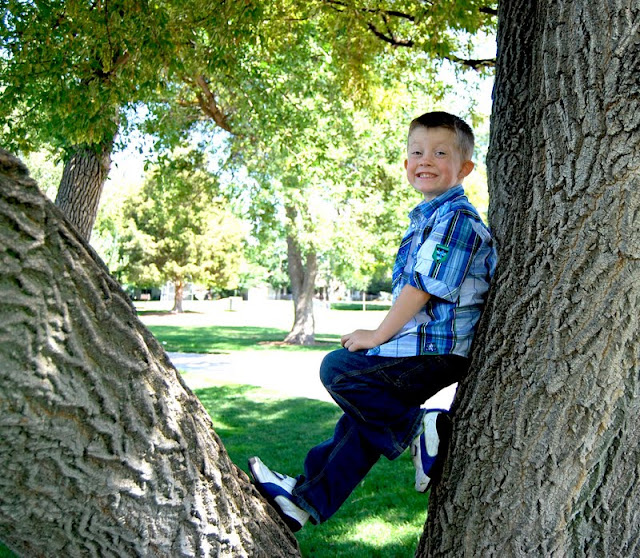 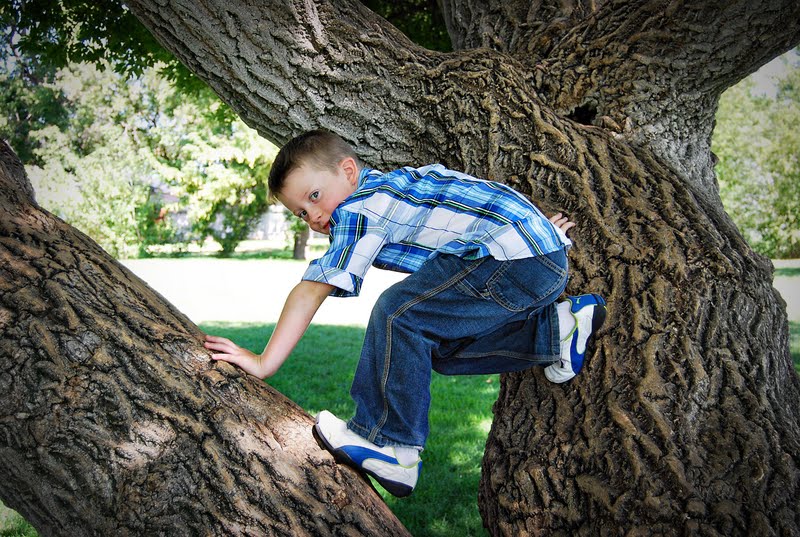 I really liked the idea of Nie nie's back to school supper.
And decided that was a tradition I would love in our home too when Cache started school someday.
So I picked a theme. "Learn with Joy." 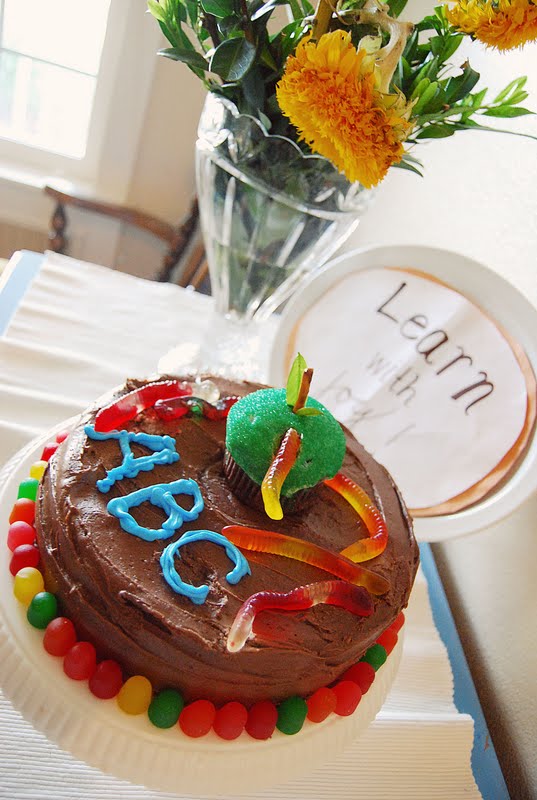 Made a special cake.
Note this cake has worms ALL inside of it, so you can't take a bite without a worm.
(Cache's idea of course!) 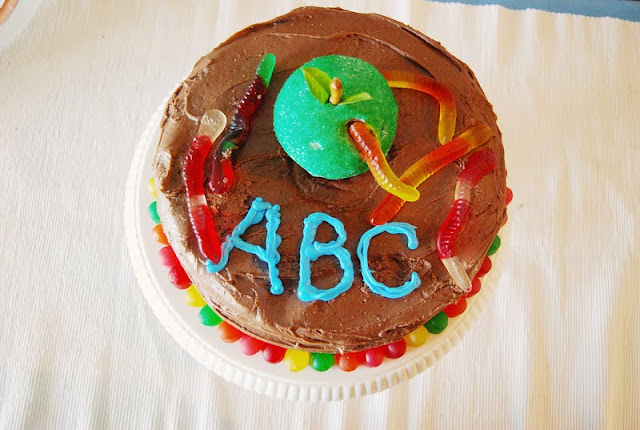 Only got half of dinner done.  And of that half I burnt half of THAT.
but Cache still enjoyed his Zucchini pizza.
(Thanks for all the giant Zuchinni Janie!)
In all honesty back to school feast was a complete bust.
Good thing I had decided that morning to love life not matter how messy my house gets or bad dinner turns out.
Even the flowers died before dinner even started.
But we really had a good time.  I kept thinking, Man I'm so glad I decided that this morning or I would be miserable right now! Ha. I'm a head case, my dad would say. 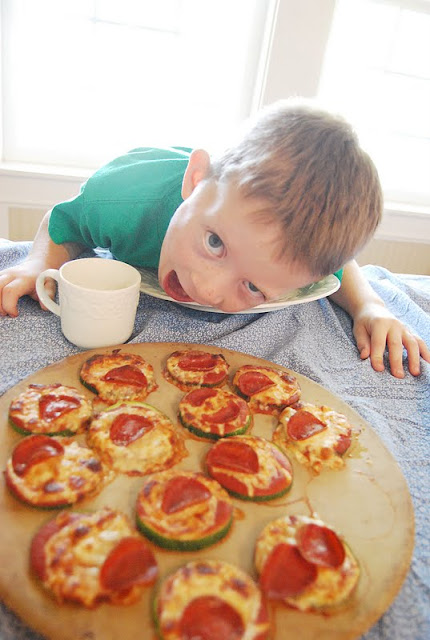 Tonight.  Devin is working late.  The babies are both sleeping.  Cache and I sat on the couch and shared a cupcake and he told me about his day.  All the rules.  The boy named Danny. Only 4 people allowed in the bathroom. How he loves recess. He played tag at recess. Sat criss cross apple sauce hands in lap. How he waits for recess line up to go to the bathroom.  I told him on school nights he can't stay up late. He said: "Oh yes, because then I would be too tired for recess."  And then it came.  I got the lump in the throat just seeing it all play out in his eyes. The little person he is. Discovering his world on his own. Now I can feel better. I cried on my babies first day of school.  Which is surely a sign of a good mother. 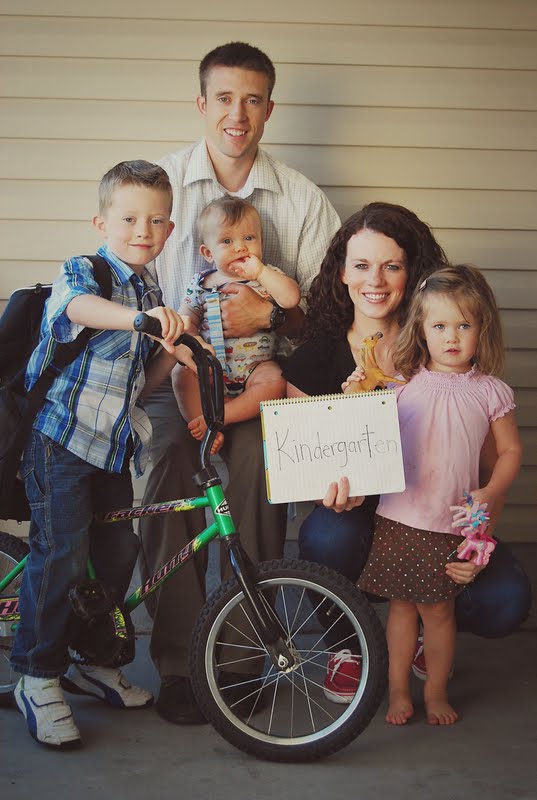 update: Cache now has had almost 2 weeks of school and absolutely LOVES everything about it.
You can see how much he loves his independence.
He sets his own alarm for 7 am everyday.
Cache has worn this shirt 4 times already. Including picture day. It's his favorite.
Our cute kindergartner boy.
We are so proud of you.
Posted by Amie Orton at 12:24 AM

Awwww, I love this post! It captures all the emotions about kindergarten and letting ones kids grow up and discover themselves! Very poetic. You guys are such a a great family with great kids!

Ainsley starts next week. She cannot wait to go! Cache is so big! It's crazy they are old enough. You are a great mom. I did a special dinner and theme too but nothing like that. It's been kind of weird here cause Brinn started school Tuesday so we are only half way into the school thing. Glad he's liking school!

Seriously? Cache? Kindergarten?!
Wow. Were we not just sitting in nursery with them? My girls would have luuuved that worm cake but instead they got lemon bars and come to find out that's not their favorite dessert :)
You look gorgeous in that picture with your big boy...it better be framed soon!
xoxo zana

Man I'm a bawl baby 'cause you got me all sniffled up just READING about Cache's first day of school. Your emotions run deep Amie. You don't wear them out on your sleeve and that's not a bad thing. Sometimes I need to be more like that, more mature. Anyway- you are such a good mom, something I'm striving to learn to be. I'm a work in progress and bless Ben's heart for being patient :) So can you teach me how to write. You are such a good writer. My favorite in fact. It's a beauty trait you have... writing. Love you and miss you tons!

I love everything about this post. The kindergarten sign is so cool, and I love the back to school cake! It's so perfect. Nai's face is hilarious in the first pictures, and the family pictures are cute. Cache has such a sweet heart.