We have been looking for Cache's gameboy for DAYS.  Every corner, cushion, and car has been searched.  Today (just now) after about the 17th (really it could have been more) time of putting Naomi BACK in her crib, I thought she was finally asleep, until, out she waltzes with something in her onesie.  Walks over to the couch, makes herself comfy, pulls out THE very gameboy from her onesie and starts playing. I gave the "look" but she just says: "Me game" and starts pushing the buttons harder with the screen up to her nose.
Where was she hiding it all these days?  She is out yet again, this time making flarting noises on the leather couches...
I didn't know you could do that on leather.
Trying to stay calm, and not clench my teeth.
I'm really close to calling nap time over.
Posted by Amie Orton at 2:17 PM 9 comments: Links to this post

So here we are.
I still feel like I'm going to go home to Missouri next week after
vacation is over.  But really, we are glad to be here in Boise.
I like the people.
Sometimes I see people riding their horse on the side of the road in town.
I love NO HUMIDITY.
Less bugs.
Clear beautiful water.
Family.
Our cute neighbor hood and newly carpeted house.
I do miss the charm of St. Louis.
And all the manicured lawns and miles of mowed grass.
friends.
Right now THERE seems a little more home than here.
Time will change that though.
Moving back west, Devin and I were most excited for family and Mountains.
So we've gone hiking a few times.
I was huffin and puffin. Maybe it's the elevation, or that this baby is
using my lungs for a pillow. Or that I haven't worked out in a month, thanks to the move.
It was pretty though. Devin took pictures of flowers for you.  And I made fun of him.
Really I love how he appreciates nature.  Still a liiiitle froofy don't you think?  And mostly Devin is just fun to make fun of, because he has some funny comebacks.
I really like having this guy around.
He may be my favorite person in the world.
Okay he most defiantly  is. 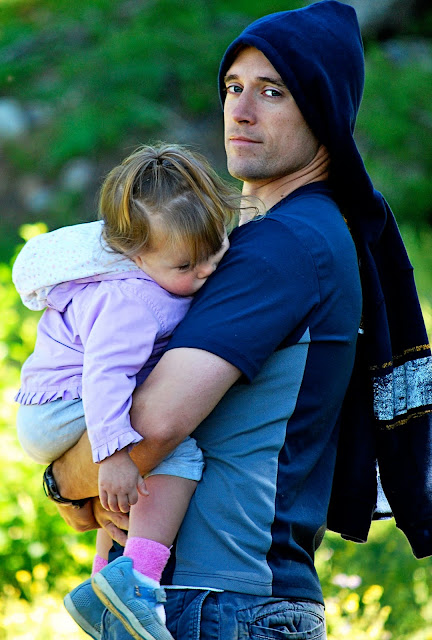 We felt back at home. AND we actually felt a bit chilly!
SO. WIERD.
Loved it. 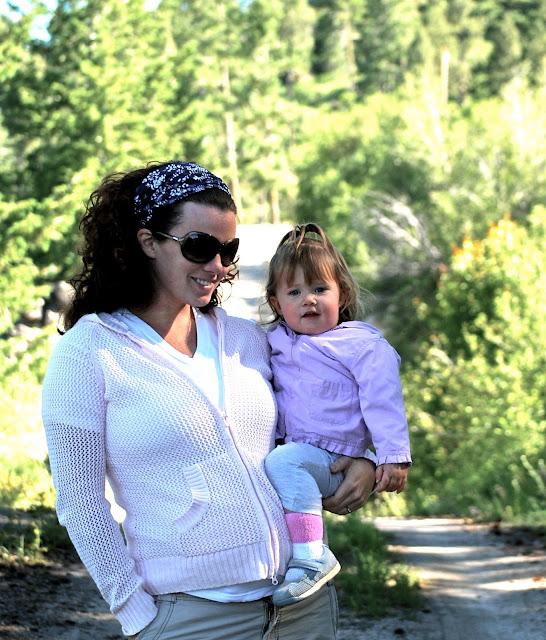 Naomi is NOT the best hiker.
She loves it, she is just really pokey.
And every time we say: "Come on Nay!"  she yells "NO!" and runs BACK the opposite way....
Then if we're lucky she'll lay in the dirt and roll in it and mash it into her hair...
So we have Cache who can't help running WAY up ahead and Nay running opposite back down the trail. I can't keep up with Cache so I end up bring up the rear, who is kicking and throwing dirt.  She'll throw a good punch too. Thus the need to carry her FACING OUT.
Man we love her. 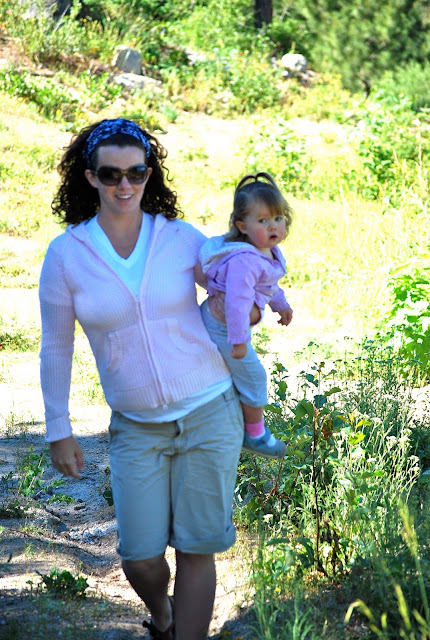 Here she is below with a dirt clod she was so happy to find.
she squealed: "Yook daddy,  doggy!" 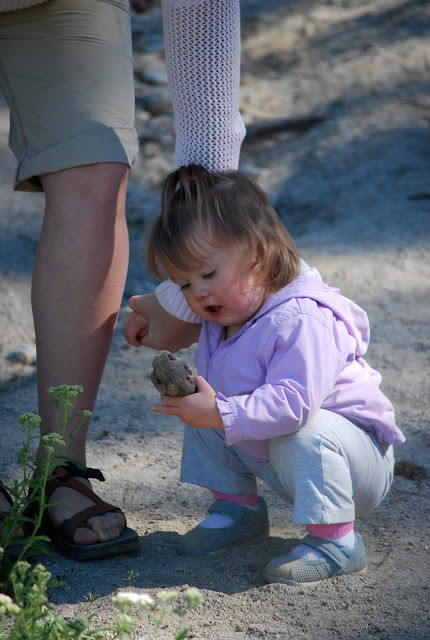 Not sure I wanted to show everyone this next picture, but it is rare to get a picture of me and 2 babies.
Actually 2.5 babies in this picture.
I'm feelin very large and in charge these days.
Cache is sitting on the "boys only" rock and banished us to the "girl rock." 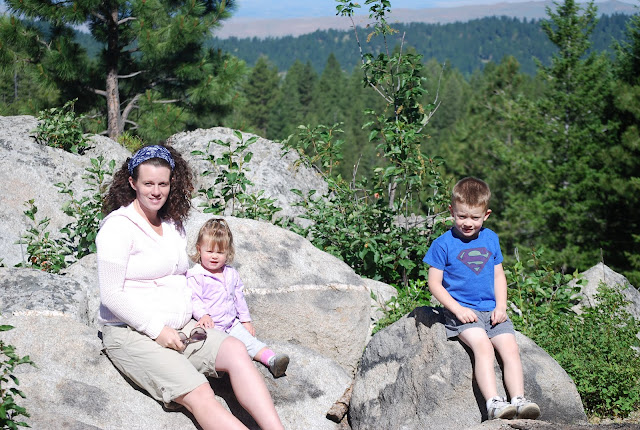 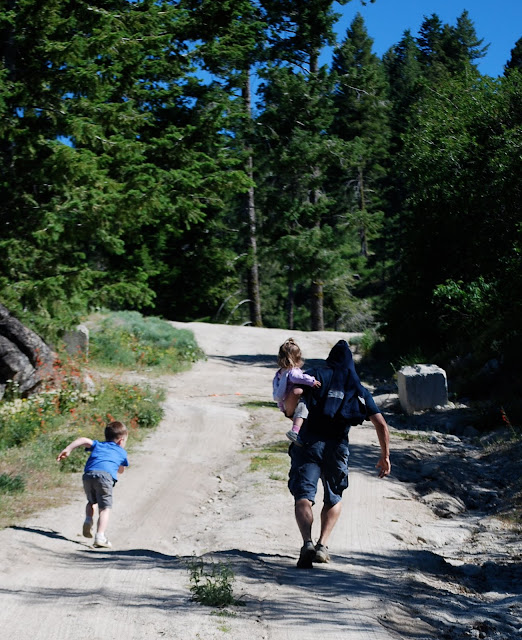 Our hike in all reality was like 25 minutes and much on a road like this one...
To get more of their energy out these guys ran circles around me.
I needed  lunch and a nap.
Devin spotted a baby Coyote on the way down the mountain and walked right up to it.
I think it was thinking: "Maybe if I don't look at him he'll go away." 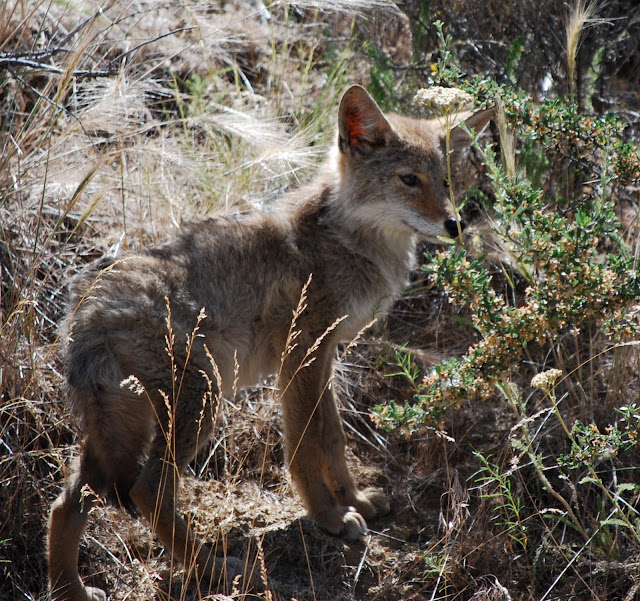 That's all.
Posted by Amie Orton at 3:25 PM 5 comments: Links to this post

Watch this for a better day.... sure made my day better.
Posted by Amie Orton at 10:42 PM 1 comment: Links to this post 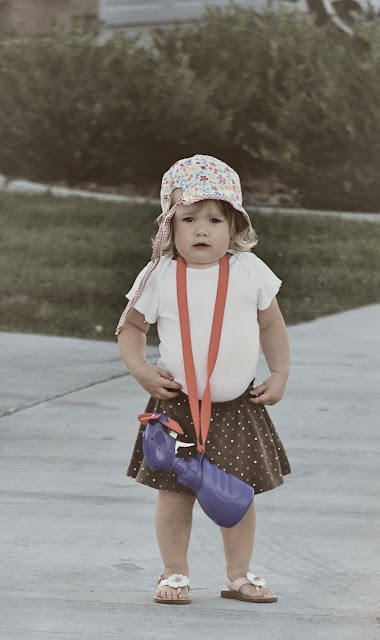 Nay dressed herself for our evening walk.
Besides the onsie all the other pieces this ensemble were
a surprise to Devin and I.
We were all standing by the front door holding it open and yelled for Naomi.
"Come on Nay are you ready?"
She comes busting through the house as fast as she can, passed us and out the front door.
And in her tiny voice; Nay: " Tink too." (thank you for holding the door.)
aaah she is so exhaustingly fun.
Posted by Amie Orton at 9:51 PM 5 comments: Links to this post

Devin has begun calling him Jim all day today after this little conversation.
Posted by Amie Orton at 8:32 PM 4 comments: Links to this post

Moving our life from MO to ID.

welp,
we are here and semi-settled. 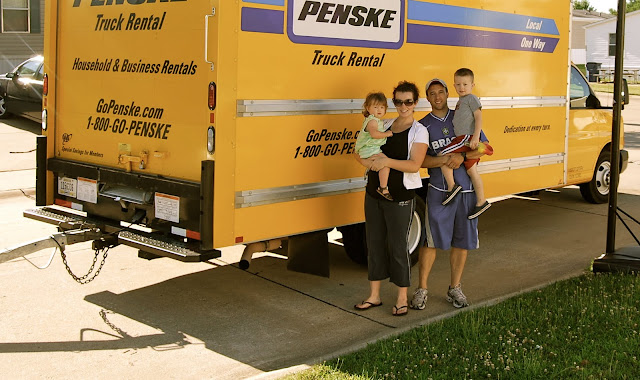 (us 10 minutes before driving away from our house in Missouri)
Devin and I ran into the house for one more last look around for anything left on or forgotten.
As we did, we kinda had a moment where we both realized we would never be in our home again.
So weird.
Although it had been a source of stress the past 6 months,(selling a home by yourself, blah.)
There were a lot of memories there.  Naomi's only home.
I suddenly saw ghost images of us running around in that house, praying, crying,
laughing, worrying, cooking, talking with friends that became family. Devin studying and struggling, My water breaking,
(I'll never tell the new owner WHERE.) haha.
Bringing Naomi home, rocking babies, putting on band-aides.  Yelling and apologizing, dancing to music to help us all feel better, family home evenings, kids running in circles while we clap and sing,  recieving heart breaking news, praying some more, hugging, kissing ;) encouraging one another, "It's going to be okay." Missing family, sucking it up and going on, painting, dreaming, hoping and praying some more.
Oh man what a loaded few  years graduate school was!
We changed a lot as a family and as people in that home.
A lot of our heart did seem to reside in the walls of that house, and I felt it at that moment.  It's the only way I know how to describe it.  We hugged, as if to say good bye to the past.  Started to choke up and so we quickly let go.
No time for that type of thing.
And Devin definitely didn't want to be crying in front of my dad. We raced around found a baby doll in the kitchen cupboard. Set the keys on the counter and slammed the door behind us.
We are still recovering from the stress of selling a home, hoping it all goes through while packing in two weeks.  (We moved the day after closing.)
Then driving for 3 days with Naomi
in the car.  Poor little girl, she was literally pulling her hair.
Toys would not entertain her for long, t.v does not interest her, and
she only sleeps in her crib NOT in a car-seat. To say the very least I was SO SO SO glad my dad
came out to help drive.


He had his recipe for happiness:
driving a big truck
jerky
black licorice
Talk Radio
Caffeine.
Car trips are the one time we can argue that drinking caffeine is better for your body than crashing.  Except of course if your with child as I was. No Dr. Pepper for me. darn.


Being worried about him all alone for
so many hours, I called him to make sure he was okay...

"This is awesome, I just listened to the whole 2 hour program on the history of
combines, then after that they had another program on the history of guns!"
welp okay then.
Plus he has: "Always wanted to drive through Nebraska."
:)
Arriving in Boise, Devin's fam came over including brothers and
cousin.  Had us unloaded in no time... seriously like 35 minutes. Into the garage mostly.
Our home wasn't ready for us.
So we took off the next day for La Grande.
All 5 of Devin's siblings were there.
They camped. We did not. 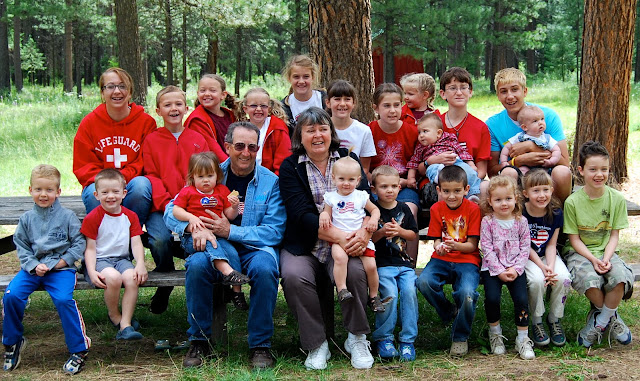 Devin's mom and Dad with All of their grandchildren. 21 right?
Had to include the next one, only because of Klora's smile/laugh.  (3rd in from the top left)
They are all laughing at Uncle Darrin doing, I don't know what, but I think he has found a summer job for when he's not teaching.  Working at a photo booth. Just look at some of these happy kids.
Such fun cousins. Every one of them. 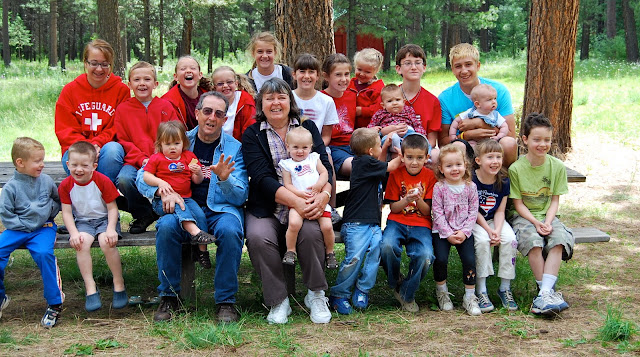 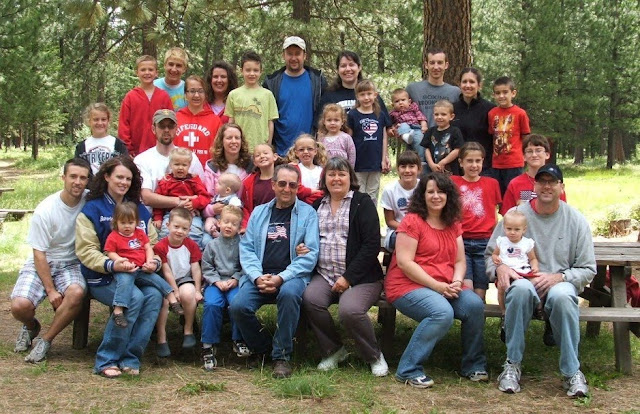 Wayne and Janie applauding Uncle Dylan's speech on the constitution at the flag raising... 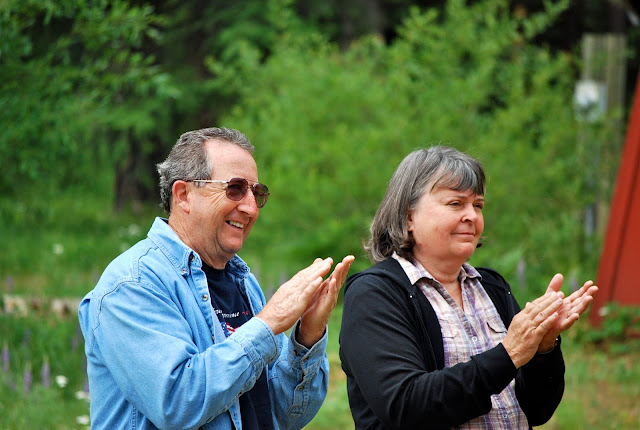 Dylan thought they were making fun so he tripped Grandpa in a game of soccer afterwards.
Doc Devin concluded no stitches were needed, but that it looked pretty cool. 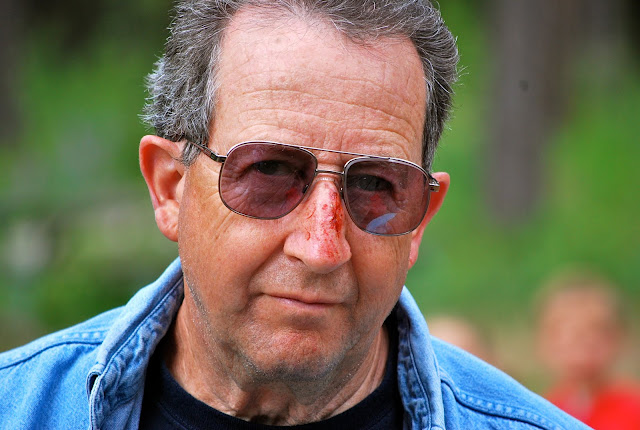 Despite our joy of being with family after FOREVER.
This is just about how we ALL were feeling inside
after that long trip.
In serious need of a nap. 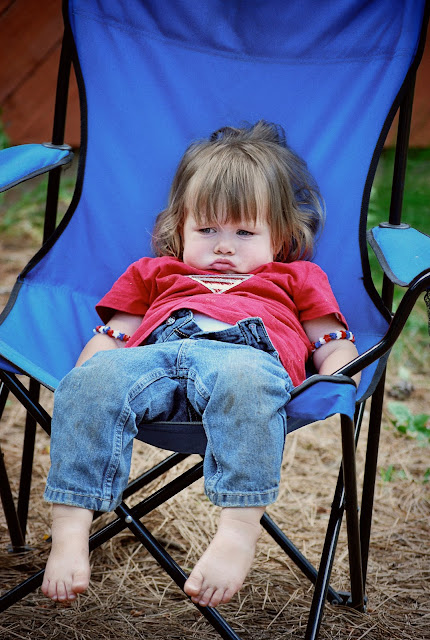 But it was so beautiful. 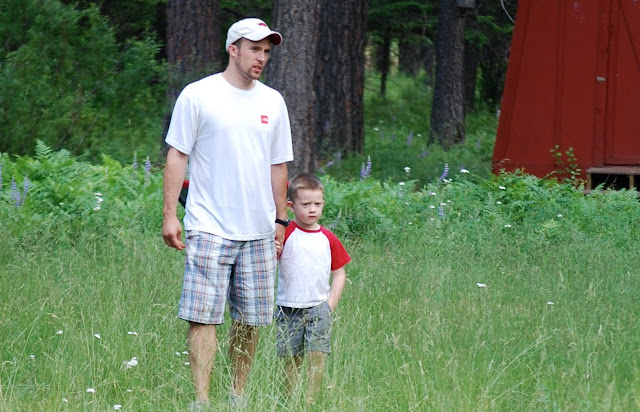 And the kids got good and dirty which is part of the definition of having true fun.
When your a kid. 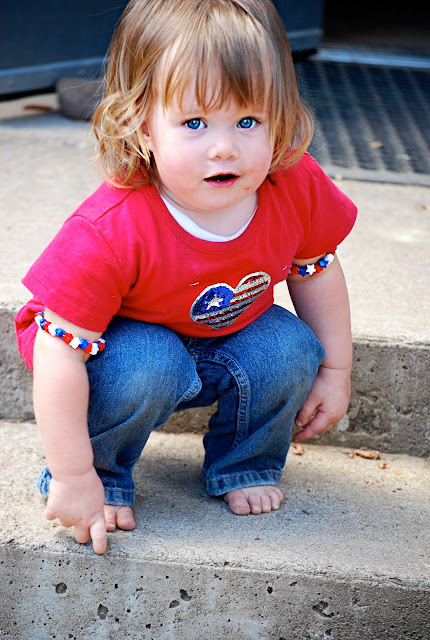 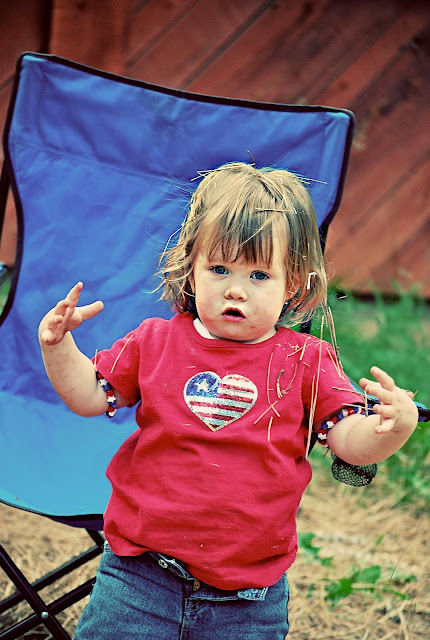 As in many families with lots of cousins, there are sets of "cousin twins."  Basically same b-day look alike ect...  Makes family get togethers all the more fun.
There are many sets of cousin twins and triplets in the Orton grandbaby bunch...
Here is Dustin and Klora.
Devin snapped this during the taping of a rap video... 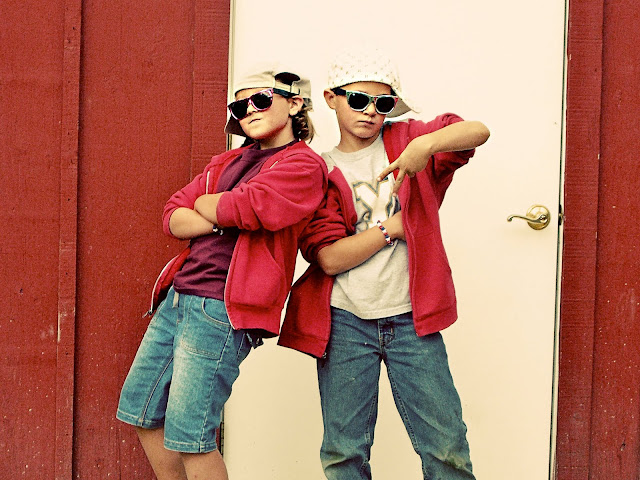 Now we are back in boise,,,figuring things out.
Always something to straighten out it seems....
I've decided to except that things will not ever be perfect.
That was hard for the perfectionist in me to accept.
I am enjoying life much more now.
Now if I could just find my way to Target without a chauffeur...

Posted by Amie Orton at 4:44 PM 5 comments: Links to this post