Before I was even out of bed, Cache saw something glowing in the basement and was sure it was a ghost.  Noami checked for him.  Then they came tearing up the stairs to my beside, eyes wide to tell me all about it.

The sky is very overcast today and Naomi insists Heavenly Father or Jesus did that just for Halloween because they are in charge of everything.

After breakfast I found Cache in the back yard rocking in a rocking chair and stairing at the foggy morning sky. He said he was just trying to charge his glow in the dark vampire teeth and look for rocket ships.  Of course.

Thursdays I drive Cache to school instead of the bus so he can attend  Spanish class.  On that drive he told us all some scary stories I wish I could remember. I have so many of Naomi's stories about her friends parents being eaten by vamp-powers running through my head, that I can't remember Cache's.

Naomi has talked non-stop today about how "Ghostez are very real Mom. OH and vam-powers are real I know that."  When I ask her how she knows she says her friend told her and she knows her friend is telling the truth because her friend ALSO saw Santa Clause.  Gage who decided that today he needs to wear his giant snow coat and be buckled in his seat with it, peaks out from under his hood because its so big and bulky it covers his face  up to just below his eyeballs and just repeats the things Naomi says and adds: " Yah dat are spooky."

Another story she told me in dead serious tone was how she saw a ghosts shadow by my room and the ghost had long dark curly hair.  But it wasn't me. She was sure of it.

I have to say my kids are officially spooked this Halloween day. And I think they are loving it.

I LOVE this time of life! I love being a Mom!


This seems like a good time to tell the story of our basement ghost.  I don't go in the basement often. Just to watch a movie on the big screen on weekends or to shut off the lights in the toy room at the end of the day. The kids spend a big time of their days in the toy room though.

I would go down the first weeks living here and notice that everysingle light was on in the basement.  Bathroom lights, storage room, living room, spare bedrooms (even the locked one)  and the hall lights.  EVERY DAY. I got frustrated because this is a big house and lots of lights and I was especially anxious for our first electric bill in the house.  So I would routinely shut them all off and shut all the doors to the rooms and tell them not to play in the other rooms.  Which they told me they weren't.  And Naomi and Gage don't really know how to lie yet, so I know they were telling the truth.  I started paying closer attention to what was happening down there to try and figure out why this was happening.  I could hear Naomi everyonce in awhile come out of the toy room and yell: "HELLO?! are you there?!"  Then pretty soon I would hear a door slam shut.  So I would go down, shut all the lights off and lecture again. Not to play in other rooms which they insisted they weren't.  (Which was true.)  So the next time I heard Naomi: HEEEELLOOOO! Where are you?"    I went part way down to investigate further and she was there yelling at the empty basment. Naomi freaks me out sometimes. Then She sprinted into the darkness and turned every single light on that she could and sprinted back into the playroom and slammed the door behind her.  I had to sit down on the stairs and just laugh out loud to myself.  Mixture of pride that she would face a fear like that on her own and also still freaked out. Just a bit.

Posted by Amie Orton at 1:17 PM No comments: 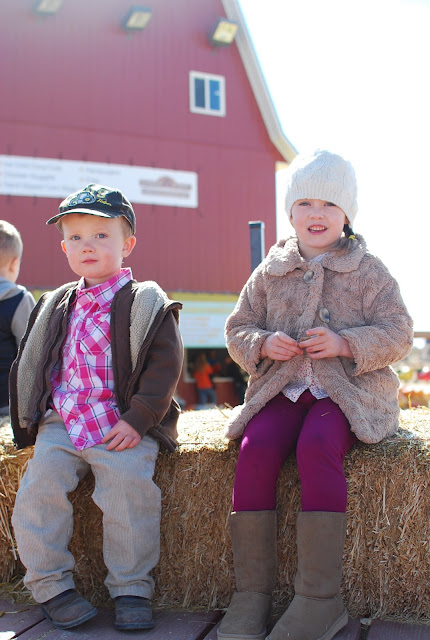 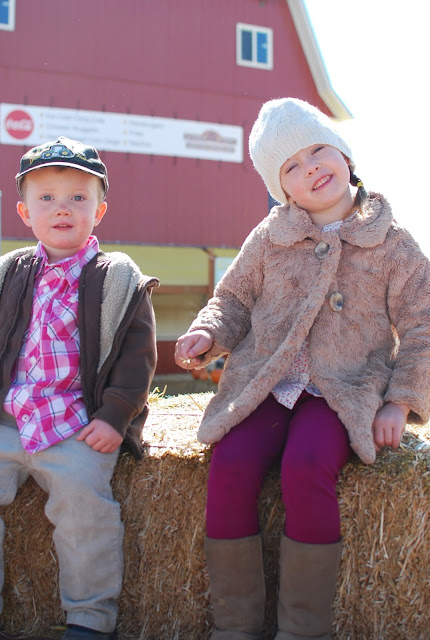 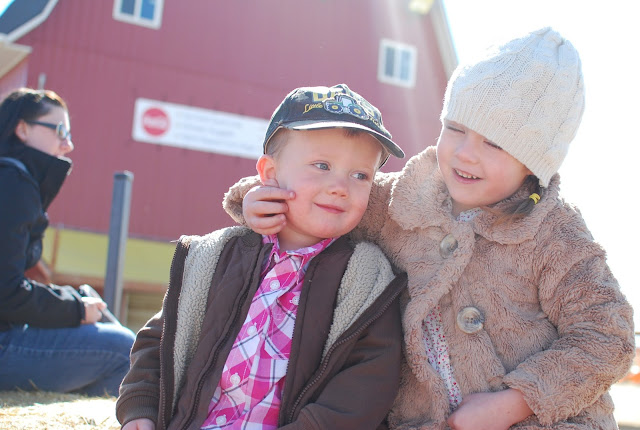 Perfect pumpkins picked.  Naomi had to pick one with lots of colors. 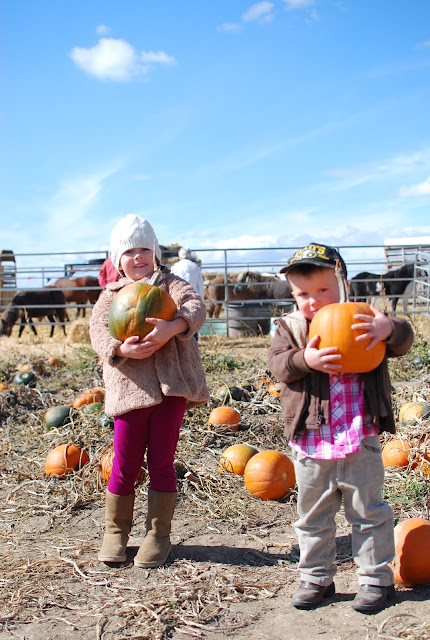 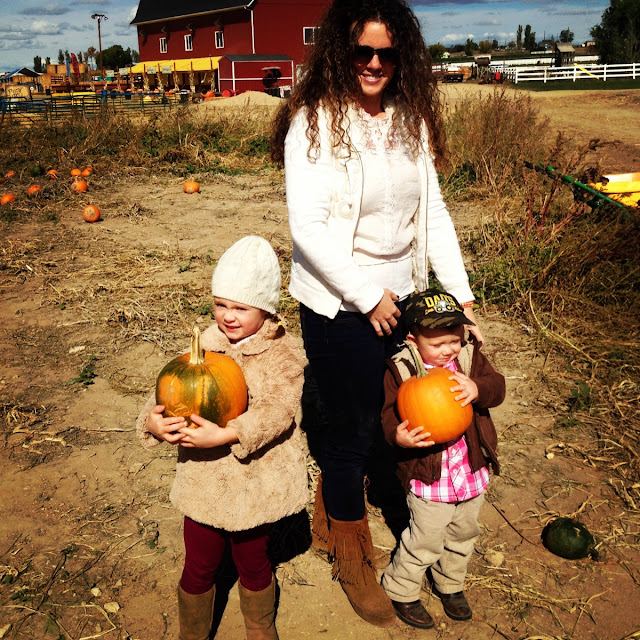 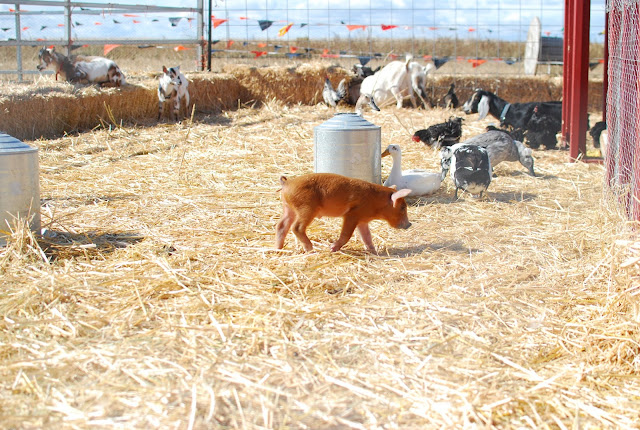 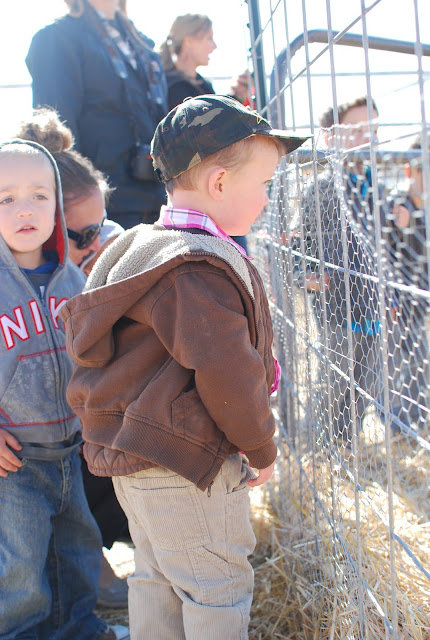 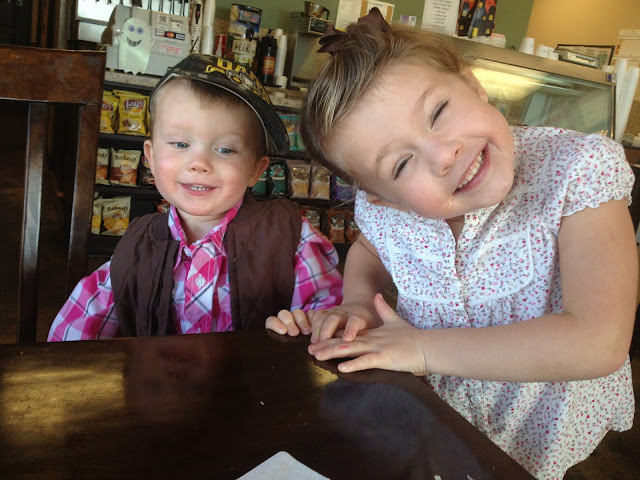 Naomi and her pre-school teacher. Can you tell she loooves her teacher? Well, she does. 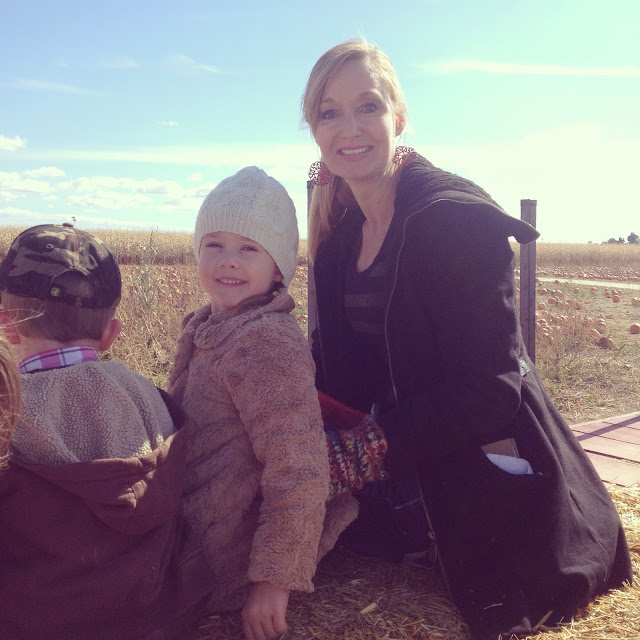 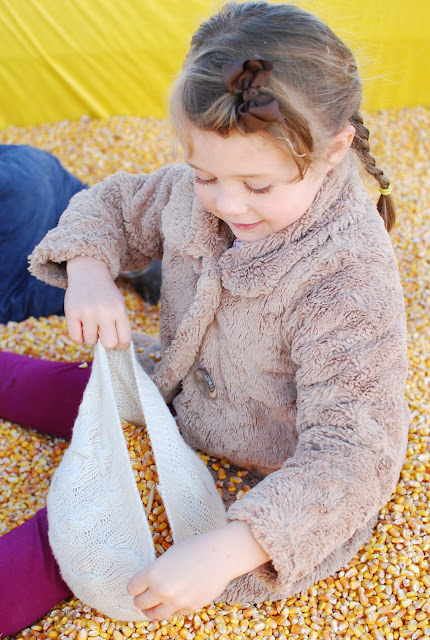 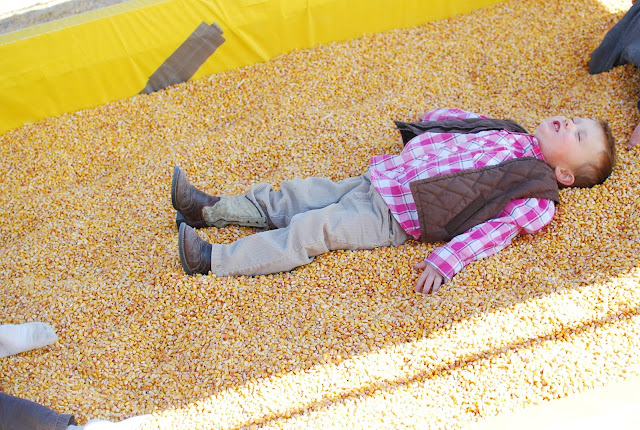 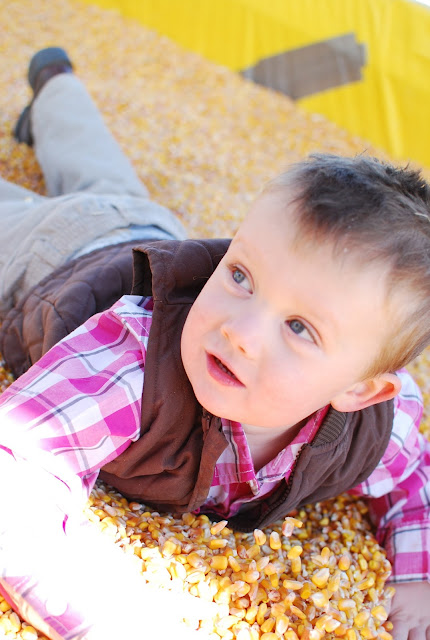 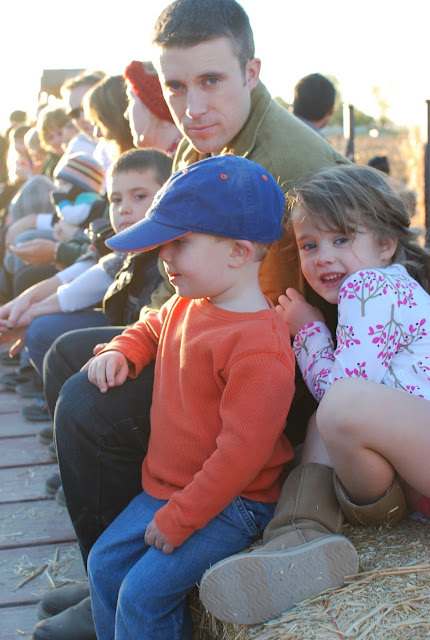 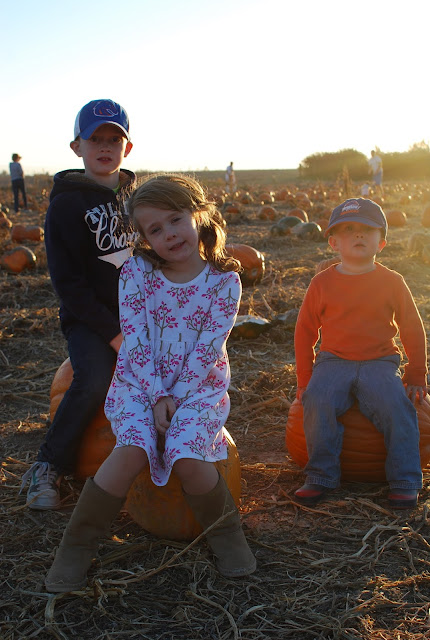 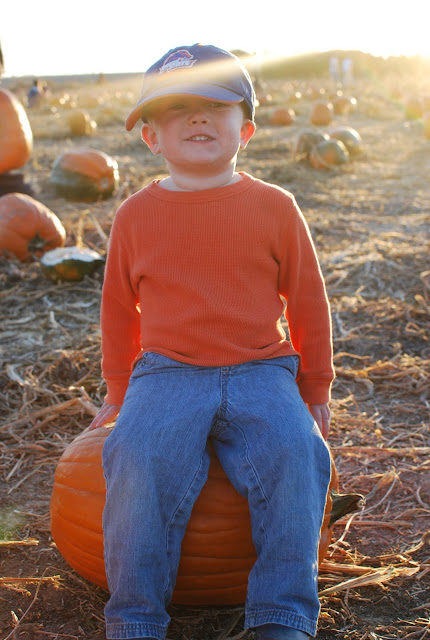 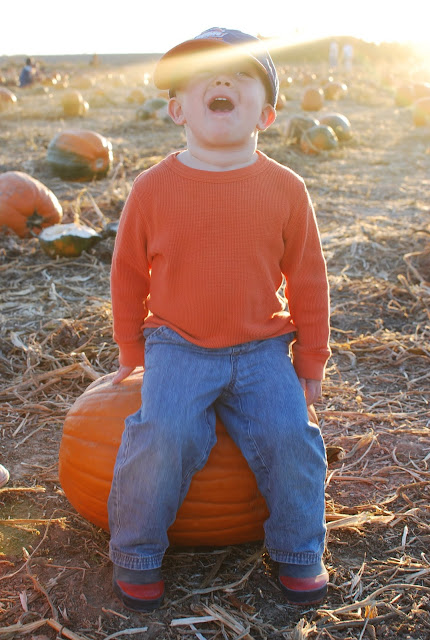 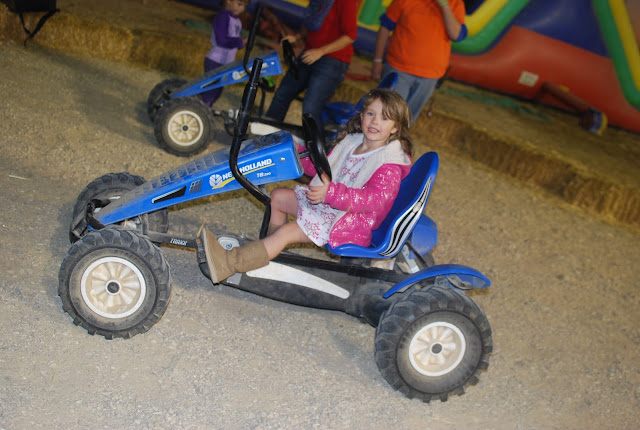 Gage threw a fit sitting on Devin's lap. But he can't peddle... 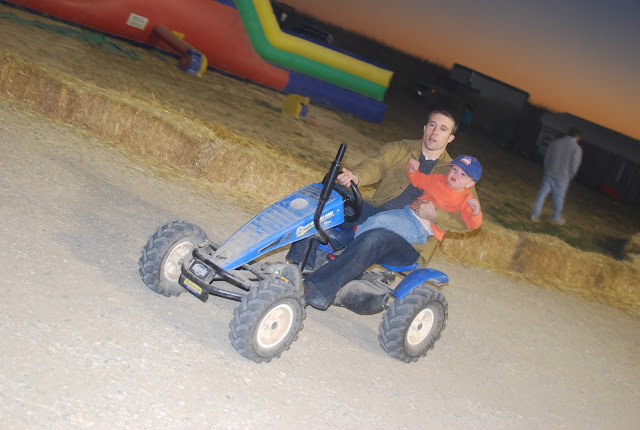 So Devin's pushing him but Gage doesn't know it.  Wow.
So much energy keeping a 3 year old happy. Very worth it. 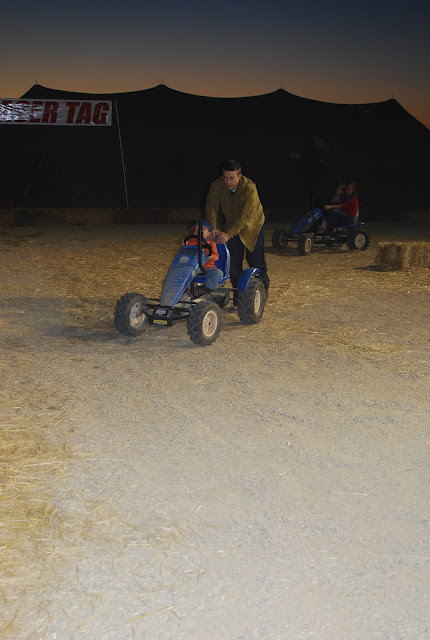 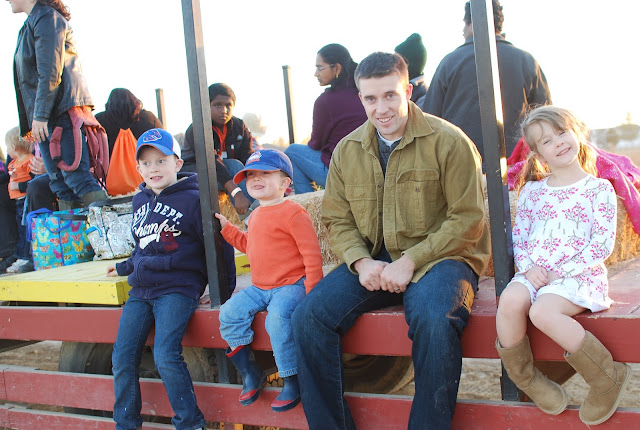 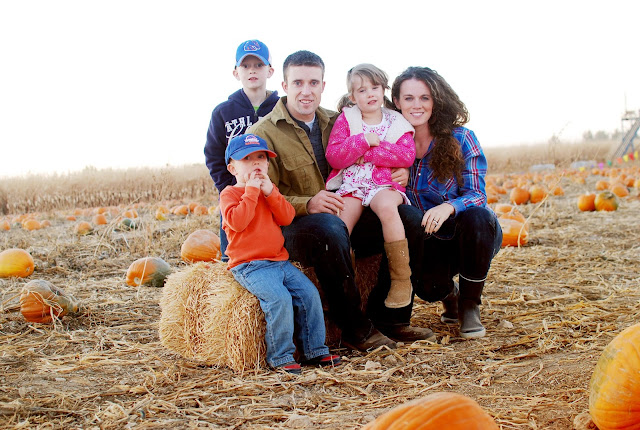