I have been a long time advocate of moving Christmas to January or February.
These months are kinda *bleh* and we could all use some extra time to prepare for Christmas and recover
from Thanksgiving. What do you think? I know I'm right.
SO, to get through these months this is what we've been doing: 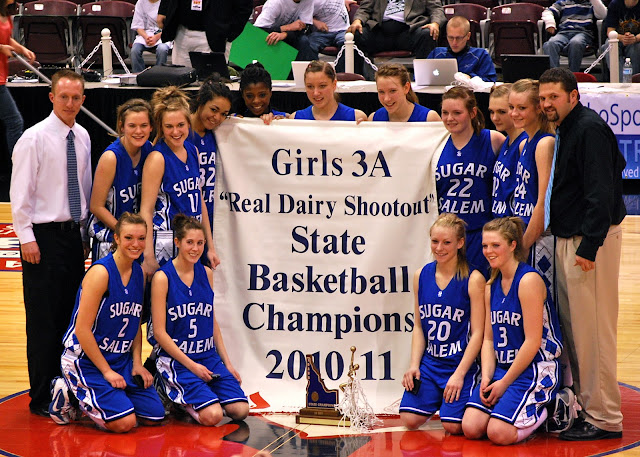 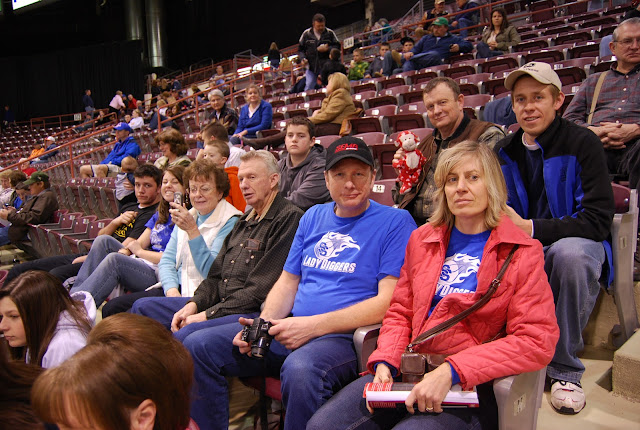 Sierra is only a freshman.
She did awesome.
Blocked out three girls at one time.
Yes she did. 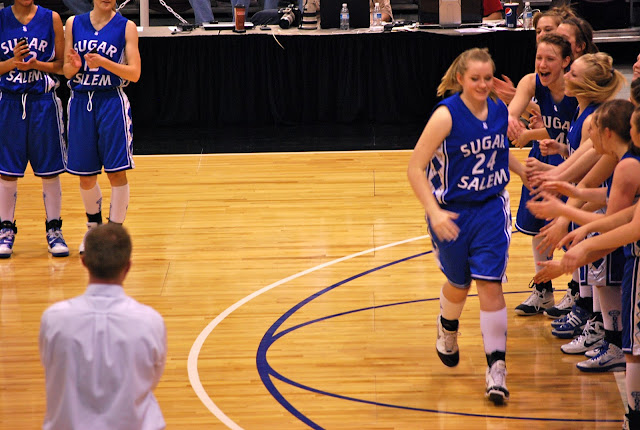 The proud parents, Uncle Troy and Aunt Shelly.
It's always fun when they're around.
Love them. 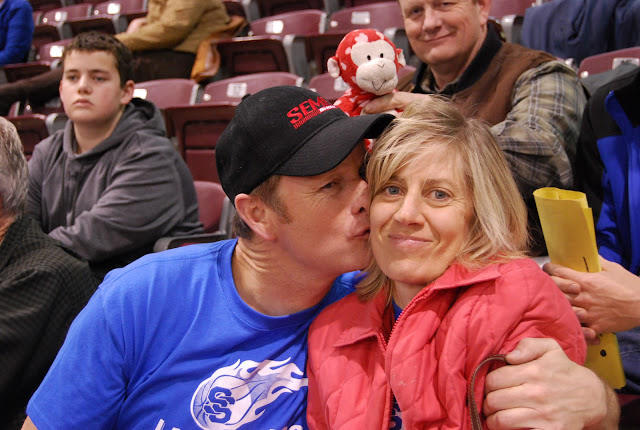 Big brother Trent made it to town for the championship game.
The game got so intense (3 point shot AT the buzzer to put them in overtime,) yes so intense
Trent started busting out his old cuss words:
"AAAAPPLE SAUCE!"
"AAAAAPLE FRITTTERS!"
Here he is showing us how the girl banked a 3 pointer. 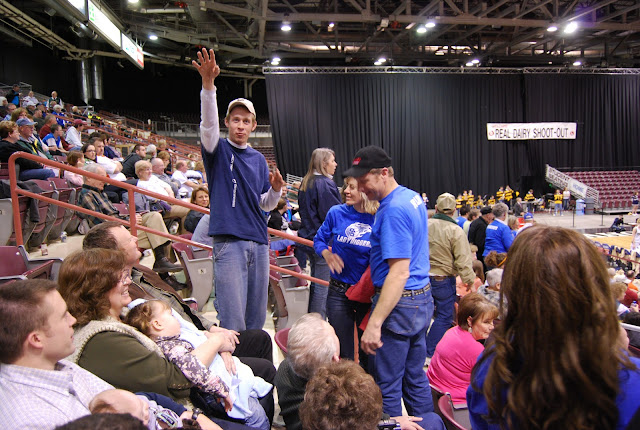 Naomi only woke up to watch the cheerleaders and was calling it a "Hockey game." 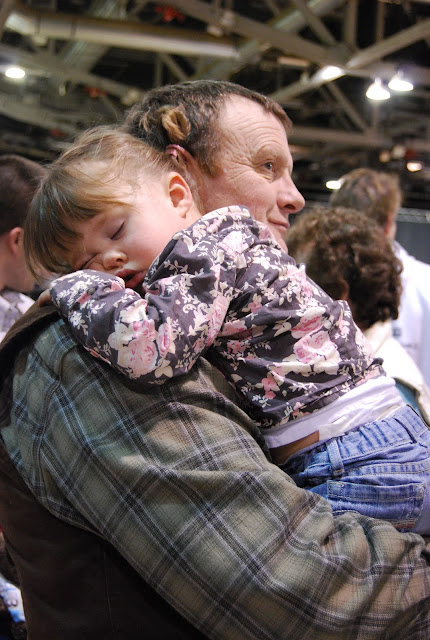 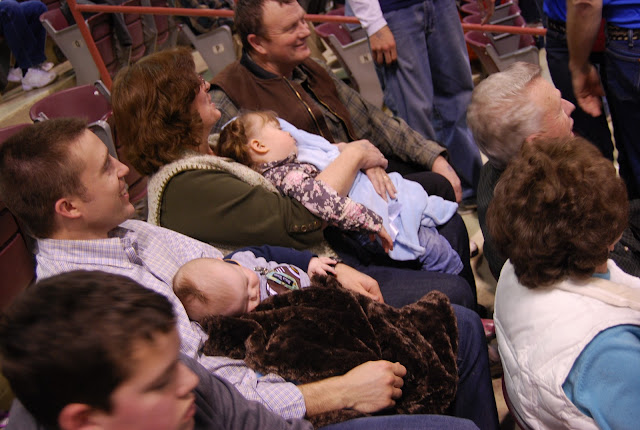 ...
My giant little brother's Rugby's games got us through one very cold weekend... 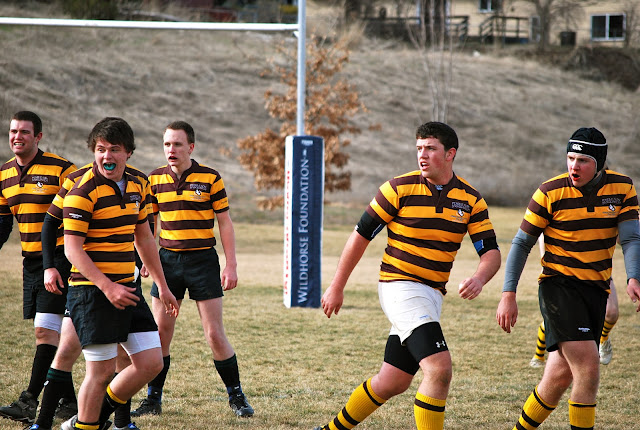 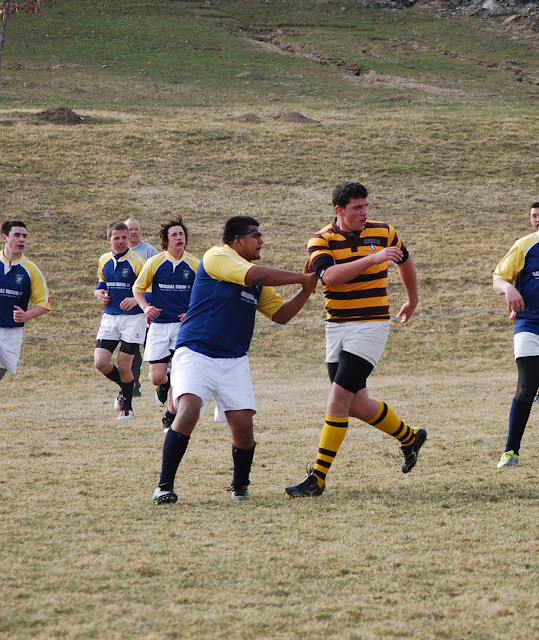 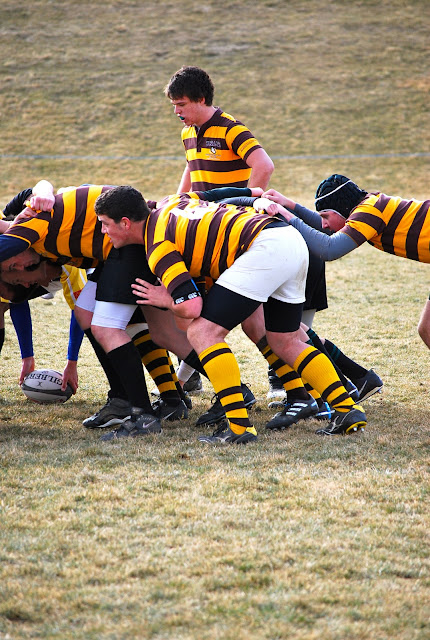 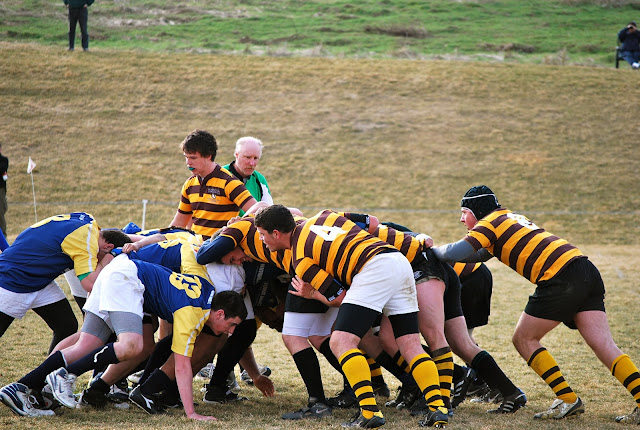 Also not pictured is Sunday afternoon, Devin and Amie's horse round up extravaganza...
which was stressfull and entertaining in the least.
NOT A ROPE ON THE WHOLE PLACE.
Everyone was either in church or in the movies with cellphone's off.
Finally found a big 5 gallon bucket of wheat in food storage to lure them back in.
(They figured out the rice we were shaking at them, was just a decoy.)
But even then those horses were smart enough not to just waltz back through the gate.
They'de get half way in and bolt.
Stinkers.
We gave up only to come back inside to Naomi who had thrown handfuls of wheat
ALL over kitchen and down the stairs, and she thought it was just the coolest thing..
all the while Cache is loosing his cookies in the bathroom and Gage was crying.
This stress lead to *discussions* on if horses really like wheat or apples better, whether you should lure a horse or heard it back in. It was a bit tense there for a minute and I had the thought, we never argue,
and when we finally do our argument includes references to Hee Haw?
Devin finally got him in with a reeaaly short dog leash and about 10 minutes of him out there reasoning, with the horses.
I don't know what he was saying, but he was using hand gestures and pointing at the gate.
I think the horse got tired of listening to him, because pretty soon, they both just followed Devin right in.
We cleaned up all the wheat and got the boys settled and Naomi walked in with a rope.
NO KIDDING.
Anway I wish I would have taken a picture of Devin in his White shirt and tie
trying to drag the big old horse with a super short dog leash and talking to the horse.
Then I wouldn't have had to type this long story to remember it.
AAAh life is fun with Devin in it.
...
Anwho the rest of our winter is back here at home:
Here is Naomi  with her li'l pink cup out there to catch herself a snow snack.
She loves to eat snow.
It was like food falling from the sky! 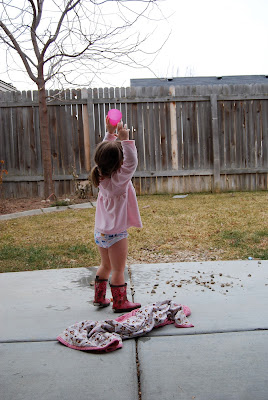 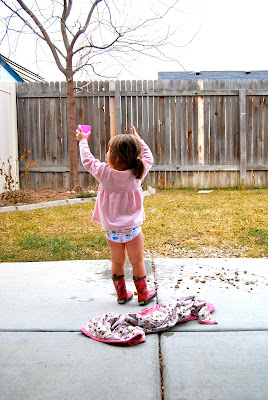 Even though she is dressed in 4 times more clothing than normal, she realized it is still not enough. 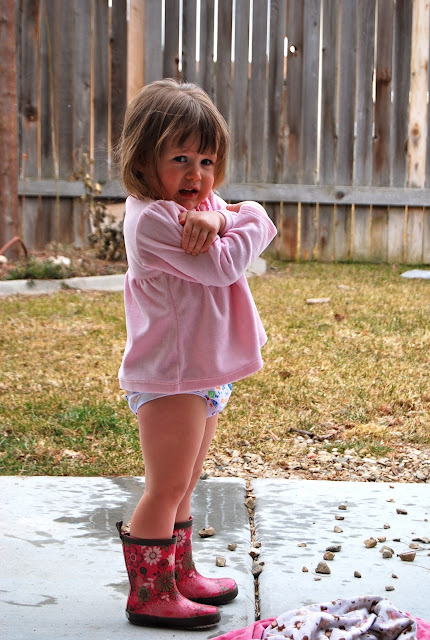 Cache dressing up Gage-Louie.
He hasn't figured out his hands well enough yet.
So he will leave these on all day.
As long as it gets him someone smiling at him,
he's happy. 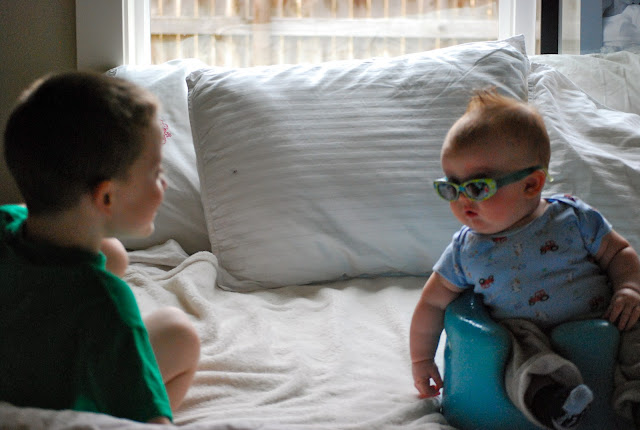 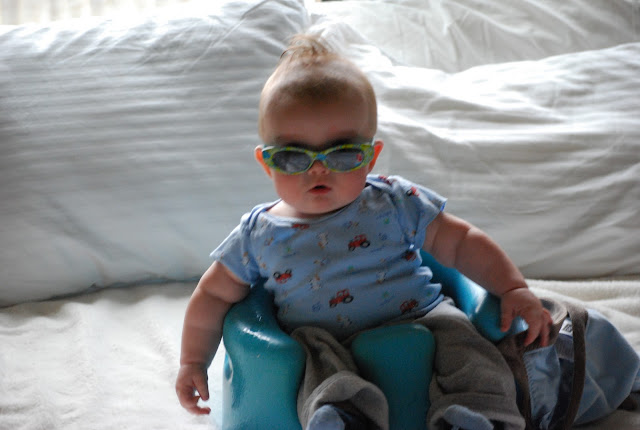 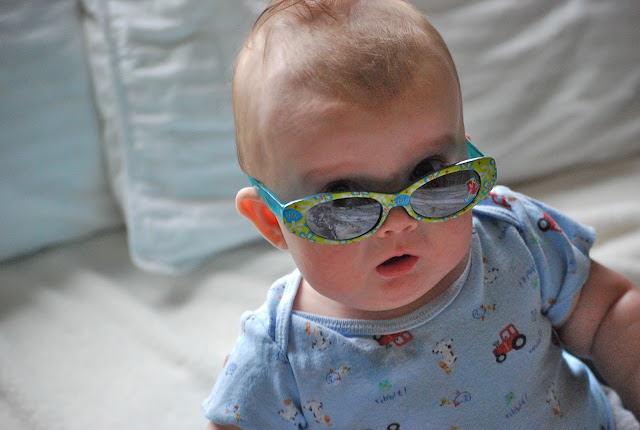 and his baby muscles 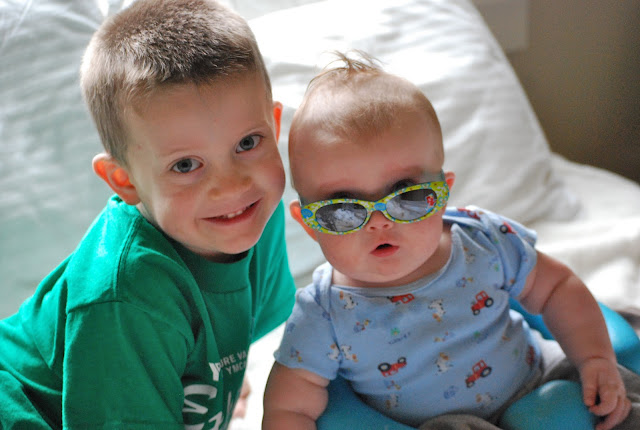 He lifts my spirits, as we wait for spring. 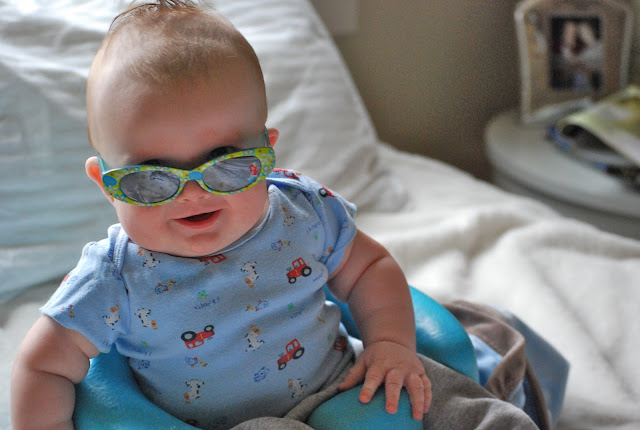 Christmas moved to February.
Anyone with me?
Posted by Amie Orton at 4:23 PM

I love how Naomi is always half naked or more! :) Cute!

Oh, how I wish we could have come to the Boise and seen everyone...winters are long. Thanks for sharing the photos:)Love you guys.

Holy Cow... this post officially goes down in history!!! I just picked myself up off the floor from a laughing fit that sent me clear into tears! How do you capture the stories so well? You tell them perfectly. As much as I wish there were pictures of the horse round-up, they weren't really needed. Your word described it perfectly. As soon as you started talking about Devin working his magic and the horses just going in, I had it all in my mind.
Now, onto that chubby baby of yours... you are such a lucky mom (I am too, I know that) but just look at your children for a moment. They are somethin special, that's for sure! I coulda used a Gage-Louie during my Idaho winters to lift my spirit.
Now, onto Troy and Shelly. I LOVE THEM! I miss them. And Trent, it was so fun to see his face on your blog.
Well, like I said, this post is awesome. I love you Amie and I am so glad I married Ben (he's awesome too) but because now I have awesome in-laws! See you in 3 months :)

Oh, and David cracks me up with the sneaky monkey in a couple of the pictures. Haha... Spratling humor!

Your pics always make me laugh.

I would have loved to have seen Devin "talking" to the horses. I really wish you had taken a picture. What a fun life though. You have horses to chase! Ellie would be SOOOOOO jealous. The girl is crazy for horses. Maybe we'll come visit your families farm sometime. Sad you're so far away :(

Just watched that video/song & I needed a good cry so I called my sis and told her to watch b/c I don't like to cry alone.

Then I needed to smile so thanks Naomi for standing outside in your undies & rainboots :)

I was just trying to picture your little guy and couldn't - what a relief to see that he is fitting in nicely!!!!!

Oh. . .my. . . GOODNESS!!!!! I want to squish Gage and kiss his chubby cheeks! What a cutie- and thanks for the laugh-your post made my day.