Halloween is over, birthday parties done and I finished my book that I've had so long the library won't let me renew anymore. NOW I can update.


So I fear I may disappoint a few of you. Devin ended up having a patient to see and had to come late to the trunk or treat/chile cook off, so we didn't really get time to figure out costumes. He slipped on his awesome red fuzzy and we called him a HOT Tamale, and I stuck on a sombrero and poncho and went as a Mexican Hat dancer. Kinda goes right? The best suggestion I think came from cousin Mardee after the fact when she said Devin should have just gone as "Awkward." Hahaha!


No pictures of the evening. Between the two munchkins, bag of costumes, a jack O lantern and a big basket of corn bread muffins, fairy wings and balancing the sombero on top of me head. I couldn't juggle the camera too. So here is a taste of our cute little Mr. Shmee and rug rat Tinkerbell at home... I accidentally deleted some I took of shmee, of course the cutest ones and I want to puke. Obssesive about pictures much Amie? 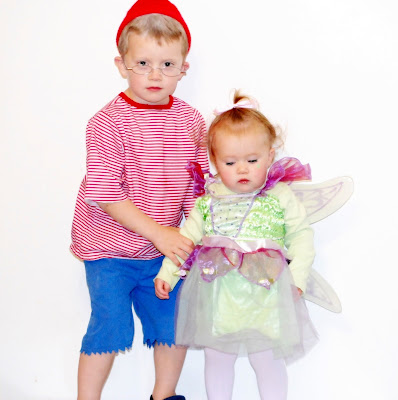 A week later on the REAL Halloween night, Cache decided he needed
to be Peter Pan, instead of Shmee. And Tinkerbell didn't dress warm
enough, so Naomi went as a puppy instead.

Most people thought she was a baby cow. So I made sure to post a pic of her tail...
Oh man, I loved this costume! We just kept squeezin her
all
night.

Devin left warm fuzzy at home and went along as another Mexican hat dancer.

Every Halloween, I get the biggest kick out of Devin. He plays the part much better than I.

It was a Happy Halloween for us.

I love your blog, Amie. Glad you had a great Halloween! I was watching a bunch of nieces and nephews at the time; we all had the swine flu. :(

Ha ha. You guys are so fun! Cache and Naomi are adorable! How did you manage to have TWO costumes for each of them? Super Mom!

I can't get over the last picture of Devin. You need to frame it. Little Naomi was such a cute puppy. And Cache... oh Cache... Peter Pan is cute, but Mr. Shmee... ha ha ha! That is hilarious. So fun. Thanks for posting Amie. Don't worry... I'm not disappointed. Devin's picture made up for it!

oh megan believe me, I was not super mom. The only costume I can take credite for was Mr. Shmee,, And we just picked up pieces at Good will..

The rest I took advantage of other super moms who made costumes for the children, and weren't using them this year. cache traded with his friends, they all swapped outfits ect. I just let them do their thing.

Ah, a successful halloween behind you. While I was looking forward to some crazy warm-fuzzy-awkward-red-thing costume, You guys pulled it all off great and you both look great as Mexican Hat Dancers. And each of the kids costumes are so adorable! Well done!