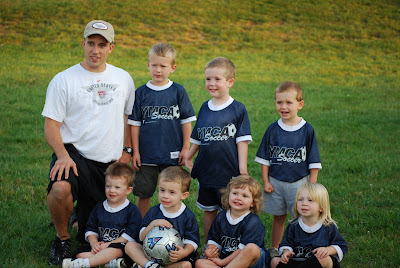 So I might have mentioned that Cache is playing soccer this year and Devin is the coach. I volunteered Devin to be the coach when they told me Cache wasn't old enough to play in the league yet. Cache just really needed an outlet like this and was already distraught that he they wouldn't let him play baseball this summer. Devin was actually really excited though (phew) and does an awesome Job. All the kids are 3 years old.. except Cache, who is 2. I don't regret signing him up at all. He is very good at dribbling,by far the most enthusiastic player his team, and is the only one on his team that can drop kick the ball. He spends most of the practice doing this and we've actually had to make a house rule, "No drop kicking in the house!" I laughed after I first said this, but now I'm just annoyed at his ability to aim for the picture on the wall(or my head) and step back and nail his target. Anyway all the kids call Devin "Coach" and last week, little Gracie yelled during one of the drills,
"hey nice hair cut coach!"
By request of my mom, here are some pictures of the little all stars! 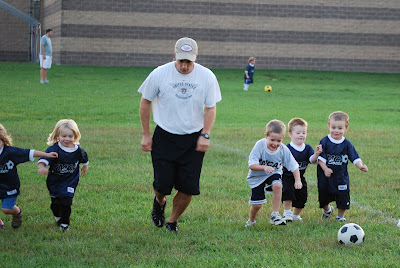 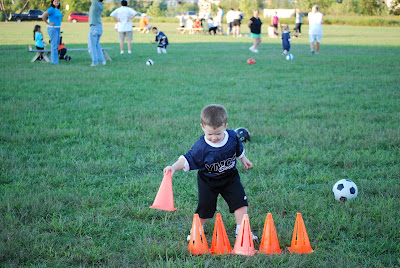 They are so little, and much of the practice is spent rolling on the ball or picking their nose, falling down over and over or rearranging the cones they are suppose to be running around. Here is Cache demonstrating what I'm talking about. 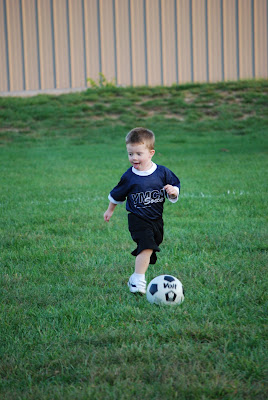 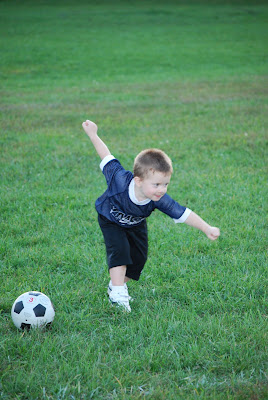 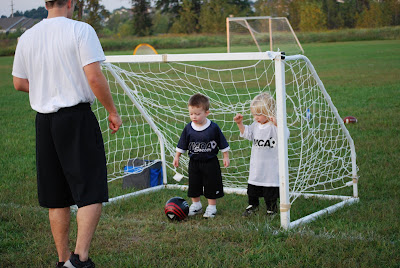 Hey Amie! Look at your cute little family! Cache is so big and your little girl looks so sweet. Good job taking care of two kids--the work load goes up exponentially I hear. Glad to see you guys are happy and doing well!

Cute pictures! I called Mom and told her you posted them. She's excited to see them! Cache looks like a little natural. Love you!

That is so precious! How fun for Cache, if he is lucky, daddy can be his coach forever!

That is so cute! I bet Cache loves having his dad as his coach.

Cache is such a little MAN! So cute!

Way to go "Coach". That is one way to get your son on the team. LOVE the pictures. Soccer is such a great way to get out some of their energy and using your home as an indoor soccer field is also a great place for Cache to practice!

So cute. Way to go, coach! We don't have a car yet, but we are doing a car-sharing thing, so we could still come down sometime...we would love to--and we'd love to have you here sometime, too. What part of chicago does Devin's friend live in? My phone number hasn't changed (ever), so if you still have it, call sometime and we'll make plans! (If not, I'll email it to you).

HI Amie...always love your action shots. If you're ward is not doing a trunk or treat we hope you'll come to ours...back to your roots!