For the love of Spandex

Weekend in review: Devin went to Chicago for a two day seminar on nutrition and exercise. The babes and I decided to stay home this time, and instead got to watch all of our studs for friends not only complete a triathlon, but ROCK it. Almost all of them placing during their first ever triathlon! It was SO exciting! I was sure glad I got to enjoy it, by watching, and not competing as was planned originally. Maybe next year, maybe... NOT. I was a really good fan. So maybe I have found my niche. Cheering. Here are some pictures from that fun morning!
Swim. bike. run.
(the order of the race) 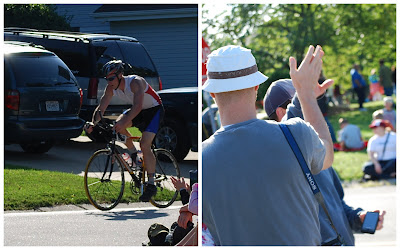 Brennan was the first person to come in on the bike. They start in different waves, so not necessarily meaning he was in first, but we knew he and Mary weren't in the first wave, so to be coming in from the bike first meant he was doing pretty darn good to say the least. The picture on the right is of Cade and Sam giving high five after Brennan went by.
I thought it was pretty sweet how excited they were about their friend doing good. 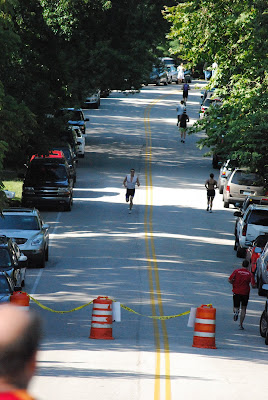 It looked pretty cool to see Brennan being the first one finishing the race. MILES ahead of anyone. Just jogging down the street. The only people in sight were those just starting the race. 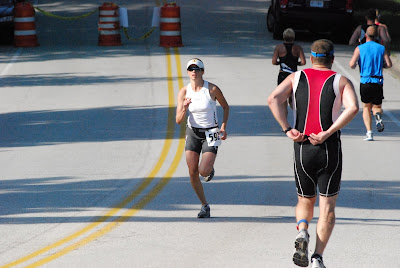 Mary was in second place when coming in from the bike, then took a 3 minute transition time (forever!) so basically gave the girl a 5 minute head start) and then blew the girl to smithereens in the run. She started 5 min after but came in a good 6 minutes BEFORE the next girl. She is amazing. Her running split time I think was faster than Brennans. AND she could have pushed harder, she said she didn't want to make herself throw up AND when she crossed the line, you could tell she had more in her.. genetic superiority does exist. At least in Mary. 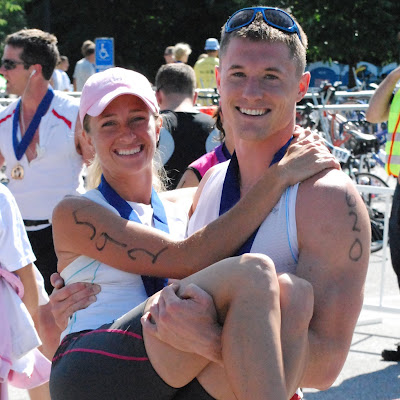 Here is a picture of the first man and first woman across the finish line. They were like: "Hey your super fast like me, we should date!" Just kidding, they are already husband and wife(and have 4 children together!) 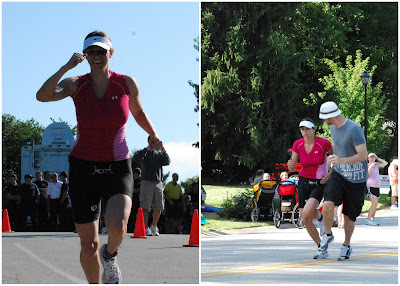 If this award existed, Summer would have also won the beauty queen award. While everyone else passed looking like they were either gonna die or kill someone, Summer smiled, posed for pictures , cheered back at the crowd and just looked super cute while doing it. She is so funny. Crossing the finish line, she lost the smile and started to feel it, Cade ran with her the last couple of yards giving her that extra boost. They are so cute. Oh let me just brag some more for my friend, this girl broke her collar bone 2 months ago, and despite her chiropractors advise NOT to race(ahem Devin) she still took 2nd in her age group! Shows how much her chiro knows. Haha. Just playin.

Here Brennan and Rick doing awesome race faces. Brennan is showing us the face you need to come in first place. It helps. Haha. Rick, I think took 1st or 2nd in his "Clydesdale" division. (big muscle guys over 200lbs)

Here is everyone that is in our ward that did the race. Marty and Tracey did the long coarse. Which is like a mile swim, 30mile bike and then half marathon run. Astounding. Gerard ( the skull cap) finished the race with what may be a torn shoulder muscle! Devin taped him up the night before and he did it anyway! Anyway, Devin and I looked at these pictures and said: "How come we always find friends that are WAY cooler than us?" Talk about stamina! I guess they have a HUGE group picture of all the people in the stake that did the race including the stake president AND his counselors. Pretty fun! Why do Mormons like triathlons so much? What weird people ;) Good job everyone! 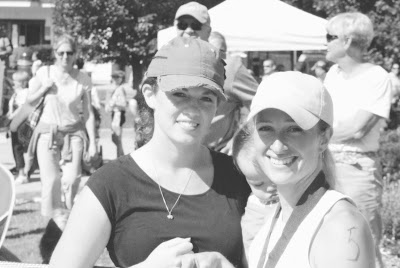 And because "some" get annoyed at me for not posting pictures of ourselves here are a few of Naomi on "The STOOP." She hangs out here well, Most of the day. Favorite spot.

Cache has taken on the responsibility of getting Naomi when she wakes up.
Usually by climbing in and then they just hang out for a bit. Nay usually loves it, except on days when Cache is a bear.(Like this day) wow. they are amazing! how did you take those pics of Naomi inside without it looking orangish-yellowish and with it looking all light and pretty behind her? They look great but I don't know how to do it so the pics inside don't look wierd.

Wow, way to go everyone! If I were there, I would have been cheering with you! :)

Wow! I knew that ward was super talented. Your baby girl Naomi is so beautiful and you always capture such great pictures of your family. She's so big!

Reading your blog is making me bi-polar. One minute I am tearing up because I miss you so bad, the next minute I'm cracking up at your great pictures of your darling children. Can Devin write prescriptions yet? I need one for my emotional stability. JK. What a great thing that your friends did the triathalon. You should do one. You would be awesome! I think I would drowned in the swim portion, so that scares me a little. Oh, and those pics of Naomi are to die for! I just want to smother my face in her squishy little cheeks. She's so pretty! K, sorry this is forever long, Miss yoU!

I love the picture of the kids in the crib!! Miss you :)

Wow those guys are studly, they are my heroes! I would love to do a triathalon if I didnt have to do the running part. We missed you this weekend. Thanks for the soccer ball, the ball cache left was at my moms house so I didnt give it to Devin. Great pictures, naomi is such a pretty girl, man she just gets prettier and prettier. And Cache becomes more and more of a boy with every story i hear. He is awesome!